The AUD/USD pair attracted some dip-buying on the first day of a new trading week and rallied around 80 pips from the 0.7700 neighbourhood touched during the Asian session. The uptick was exclusively sponsored by the emergence of some heavy selling around the US dollar, which continues to be weighed down by speculations that the Fed will keep interest rates low for a longer period. Investors now seem convinced with the Fed's view that any spike in inflation is likely to be transitory and have been scaling back expectations for an earlier than anticipated lift-off. Even a goodish rebound in the US Treasury bond yields failed to provide any respite to the USD bulls. It is worth mentioning that the yield on the benchmark 10-year US government bond extended its recent sharp pullback from a 14-month peak of 1.776% touched in March and sank to 1.5280% last week.

Meanwhile, a slight deterioration in the global risk sentiment – amid renewed fears about another dangerous wave of coronavirus infections globally – kept a lid on any further gains for the perceived riskier Australian dollar. The pair finally settled around 30 pips off daily swing highs, albeit caught some fresh bids during the Asian session on Tuesday. The momentum pushed the pair to fresh one-month tops and seemed rather unaffected by dovish sounding RBA meeting minutes. The Board reiterated that wage and price growth are still too low and the unemployment rate remains too high, suggesting that the central bank will announce another extension to its A$100 billion QE program in June and keep rates on hold until late 2023. The minutes, however, did little to weigh on the aussie or hinder the pair's positive move to the highest level since March 18.

In the absence of any major market-moving economic releases from the US, the USD seems more likely to prolong its downward trajectory. This, in turn, supports prospects for a further near-term appreciating move for the major. That said, an uptick in the US Treasury bond yields might help ease the USD bearish pressure and cap gains for the major. Apart from this, the broader market risk sentiment will also be looked upon for some meaningful trading opportunities.

From a technical perspective, any subsequent positive move is likely to confront resistance near March monthly swing highs, around mid-0.7800s. A sustained move beyond will be seen as a fresh trigger for bullish traders and set the stage for a move towards reclaiming the 0.7900 round-figure mark. Some follow-through buying has the potential to push the pair further towards the next relevant barrier near the 0.7970-75 region, marking YTD daily closing high set on February 24.

On the flip side, any meaningful pullback now seems to find decent support near the 0.7760-55 horizontal zone. This is closely followed by the 0.7730 region and the overnight swing lows, around the 0.7700 mark. Failure to defend the mentioned support levels will negate prospects for any further gains and turn the pair vulnerable to accelerate the slide back towards the 0.7600 mark. A subsequent fall below the 0.7585-80 region would expose YTD lows, around the 0.7530 region before the pair eventually drops to challenge the key 0.7500 psychological mark. 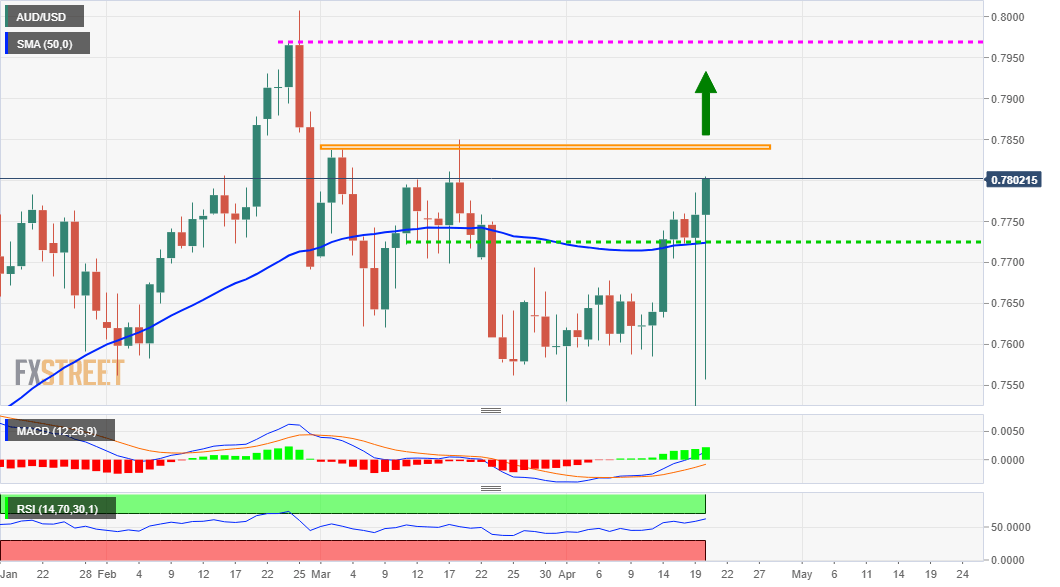