A total collapse – that is no exaggeration to what markets and the Aussie have experienced – AUD/USD tumbled to the lowest since the early 2000s as the investors entered panic mode. As the Western world undergoes further lockdowns, China is trying to recover. Will Australia rise with it? Perhaps, but it is unlikely to happen in the upcoming week.

This week in AUD/USD: Coronavirus crash

Confirmed Covid-19 cases topped 250,000 – and many more are probably carrying the virus – as 10,000 deaths have also been registered. Western countries have pushed through restrictions on movements and travel bans. Fears of massive unemployment – starting from airlines such as Australia's Qantas – have sent shivers down investors' spines.

Concerns about the economic fallout turned into a panic about a financial crisis and distressed funding triggered a rush into the dollar. The Federal Reserve massive accommodation measures, cutting rates to zero, announcing $700 billion of QE – opening dollar swap lines – alleviated only some of the rush to the greenback.

AUD/USD plunged to the 0.55 handle and traded in extremely volatile conditions.

The Reserve Bank of Australia also slashed borrowing costs to 0.25% and kicked off a bond-buying scheme.

Markets ignored economic figures such as Australia's upbeat jobs report and America's mixed retail sales – as they were for February – while America's rise in jobless claims already caused worries.

The news came out at a breakneck pace – like movements in AUD/USD – and the description above is only a summary of a wild week.

China – the world's second-largest economy and Australia's No. 1 trading partner – seems to have overcome the worst of the disease that originated in Wuhan. Life is gradually returning to normal. Beijing has been lifting restrictions cautiously, so any impact on the Aussie may have to wait. Nevertheless, reports from the Asian giant may help the Aussie weather part of the storm.

Australia has fewer than 1,000 coronavirus cases and the development of new infections will also be eyed. Prime Minister Scott Morrison announced several stimulus measures and will likely introduce new ones, as well as restrictions to movements.

Nevertheless, news from the land down under and in its largest trading partner will likely continue having a minor effect on AUD/USD as the primary driver remains the global market mood, which rocks the dollar.

The economic calendar consists of only one noteworthy event, as it is a forward-looking one. The Commonwealth Bank Manufacturing Purchasing Managers' Index will likely plunge – reflecting worsening conditions. Any figure below 50 reflects contraction and a score below 40 cannot be ruled out.

Here the most prominent Australian and Chinese releases on the economic calendar:

US events: A surge in cases expected, watch jobless claims

The US has been late to curb the disease and the number of cases is set to rise rapidly. After California and New York state-imposed restrictions, others may follow, further adding o the dire economic outlook. Lawmakers in Washington continue scrambling to agree on a relief bill worth more than a trillion dollars, and the sooner they achieve something, the better for markets. A larger deal is better than a modest one, but it seems that

The US dollar is the world's reserve currency and it rises when the global mood deteriorates. The dollar is set to gain upon depressing US news, while it may fall in response to optimism – such as if an American company develops a cure.

Markit's preliminary PMIs will likely plunge, reflecting fears among businesses. Another significant release is weekly jobless claims, which may increase to above 2 million according to economists at Goldman Sachs. Other figures such as Durable Goods Orders for February and Gross Domestic Product statistics for the fourth quarter predate the current crisis and will likely be ignored by markets.

Last but not least, the crisis impacts shoppers and the University of Michigan's final Consumer Sentiment measure is of high interest. The initial read showed a modest drop and the final read is set to come out even worse.

Aussie/USD is oversold according to the Relative Strength Index on the daily chart. Despite the recent rise, Momentum remains to the downside and the currency pair is trading below the 50, 100, and 200 Simple Moving Averages.

The ranges are wide and lower resolution technical levels are irrelevant as long as high volatility prevails. 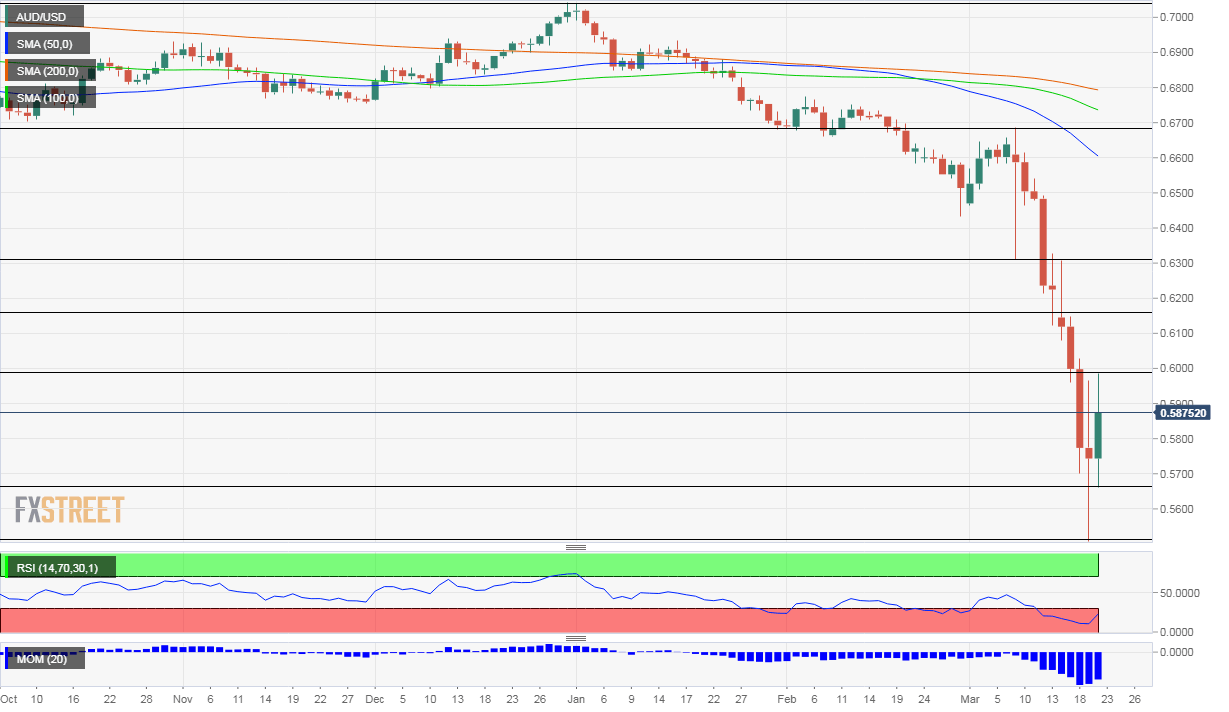 Coronavirus will likely get worse before it gets better, and the prospects for the global economy are set to further deteriorate, weighing on stocks and on the Aussie. The recent bounce may prove temporary.

The FX Poll is showing another week at current depressed levels before the Aussie leaps well above 0.60 in the medium and long term. It seems that experts see current levels as temporary.