The EUR/USD pair plummeted for a second consecutive week, hitting 1.0644, its lowest since April 2017, bouncing just modestly from the level at the end of the week. It was another intense week with the coronavirus outbreak keeping investors on their toes and blindly running into the dollar.

Panic forced central bankers to take announced and desperate measures. After cutting rates by 50bps a couple of weeks ago, the US Federal Reserve announced an additional 100bps cut on Sunday and established dollar liquidity-swaps with five central banks, the Bank of Canada, the Bank of England, the Bank of Japan, the ECB and the Swiss National Bank. Later in the week, the central bank expanded its swap-lines to other nine central banks, which will be in place for at least six months. The decision was meant to help central banks met the demand for dollars from fretting local companies and financial institutions in the middle of the coronavirus crisis.

Additionally, the Fed announced Tuesday it would revive a toll used in the 2008 financial crisis. Through the NY Fed, the central bank will start purchasing corporate bonds to provide short-term funding to business.

The European Central Bank didn’t stay behind. Lagarde & Co. announced an emergency package, worth €750 billion to buy private and public sector securities, while Germany is said to be planning a  “Solidarity Fund” of up to 40 billion euros, meant to bail out small business and workers affected by the ongoing crisis.

Ugly numbers started to show up

Market players were quite picky when trading macroeconomic data these days, pretty much ignoring those figures from the pre-virus crisis, but paying additional attention to any March number. Germany released the ZEW Economic Sentiment Survey for March, which showed that confidence collapsed. For the Union, the index was down to -49.5, the same outcome Germany had, both far below already negative forecasts. Also, the country released an unexpected preliminary estimate of the IFO survey for the same month, which showed that Business Climate fell to 87.7. In the US, weekly unemployment claims for the week ended March 13 soared to 281K, much worse than the 220K expected.

Given that lock-downs are being announced worldwide amid the coronavirus outbreak, the US Census Bureau suspended field operations for two weeks. That said, the release of certain macroeconomic figures could be altered in the upcoming days.

So far, the macroeconomic calendar includes for the upcoming week the Markit preliminary estimates for March Manufacturing and Services activity in the Union and the US. In Germany and the EU, the numbers are expected to have improved when compared to the final February figures. US data, on the contrary, is foreseen below the previous final readings.

The US will release next Wednesday, February Durable Goods Orders, and the final version of Q4 GDP on Thursday, both consider old news at this point. On Friday, the country will release February spending and income data, including core PCE inflation, this last currently at 1.6%. By the end of the week, Germany will unveil preliminary March inflation estimates.

The EUR/USD pair is hovering at around 1.0740, and long-term technical readings indicate that bears dominate the scene as technical indicators head firmly south within negative levels, the Momentum at its lowest for the year and the RSI at 38. The pair plummeted below all of its moving averages, with the 20 SMA gaining bearish traction at around 1.1040, as the 100 SMA crossed below the 200 SMA for the first time since June 2018.

In the daily chart, the pair is developing over 350 pips’ below all of its moving averages, all of them confined to a tight range. The 20 DMA lost its upward slope and turned lower between the larger ones. Technical indicators, in the meantime, have plummeted from overbought to oversold readings in quite a short span of time. The Momentum maintains its bearish slope while the RSI hovers around 33. 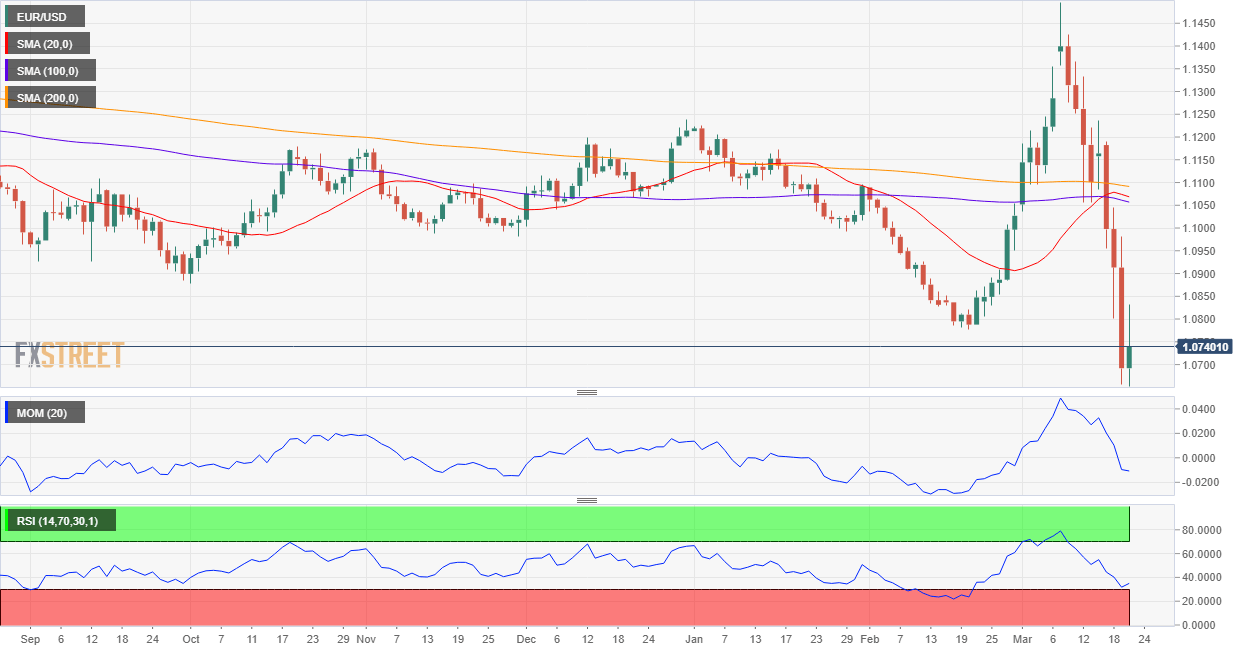 The Overview chart shows that the weekly and the monthly moving averages maintain their bearish slopes, opposing to sentiment, while the larger moving average maintains its neutral slope, with most targets accumulating just below 1.1000.

GBP/USD Forecast: Sell the rally mode as the coronavirus crisis could get worse