Gold prices saw no relief despite mounting panic throughout this past week. Speculative interest chose to keep buying the greenback as equities collapsed and the hunger for liquidity dominated it all. Spot gold fell to 1,451.16, its lowest since last November, and seems poised to close the week around $1,500 a troy ounce.

The coronavirus crisis remains the main market motor, as the epicentre of the outbreak has moved to Europe. As China reports no new cases, those in Italy and Spain continue to grow exponentially. Italy has the unfortunate record of having surpassed China in the death toll, with the latest number reported at 3,405. Other European countries are also seeing a large increase in the number of cases, with Germany, France, and Switzerland among the most affected beyond Italy and Spain.

Most countries have announced travel bans and schools’ lockdown, in an attempt to slow the spreading curve and prevent health systems from collapsing, while central banks worldwide announced stimulus measures. Equities collapsed and the greenback stood as king.

The market’s mood improved by the end of the week, with demand for the dollar easing and gold bouncing modestly alongside equities, as central banks injected colossal amounts of money. Even the Reserve Bank of Australia announced its first-ever QE program this week.

In the particular case of the US Federal Reserve, the central bank slashed rates for 150 bps in two weeks and announced it would start buying corporate bonds to provide short-term funding to business. Finally, the Fed established dollar liquidity-swaps with fourteen other central banks throughout the week, to help them met the demand for dollars from foreign companies and financial institutions.

Markit will release next Tuesday the preliminary estimates of the US Manufacturing PMI and Services PMI for March, which should reflect the first effects of the coronavirus on the economy. The numbers are expected to have shrunk from February final readings, with manufacturing output seen at 50 and services activity contracting to 48.8. The outcome, however, could be worse than that.

Worth mention that the US Census Bureau suspended field operations for two weeks, which means that the release of macroeconomic data could be altered in the upcoming days.

The weekly chart shows that spot settled below a now flat 20 SMA while still holding above the larger ones. The Momentum indicator heads south vertically just above the 100 level, while the RSI has already pierced its mid-line, now at 46, in line with further falls ahead.

Daily basis, gold settled below all of its moving averages, with the 200 SMA at 1,501.50. Technical indicators bounced from oversold readings, holding well into the red and far from suggesting a possible recovery ahead.

A steady recovery above the mentioned Friday’s high at 1,516.11 should lead to a corrective advance toward the next Fibonacci resistance, although there are no signs that the metal could extend its gains next week. Below $1,470.00, the risk will turn back south, with the market eyeing a retest of the yearly low. 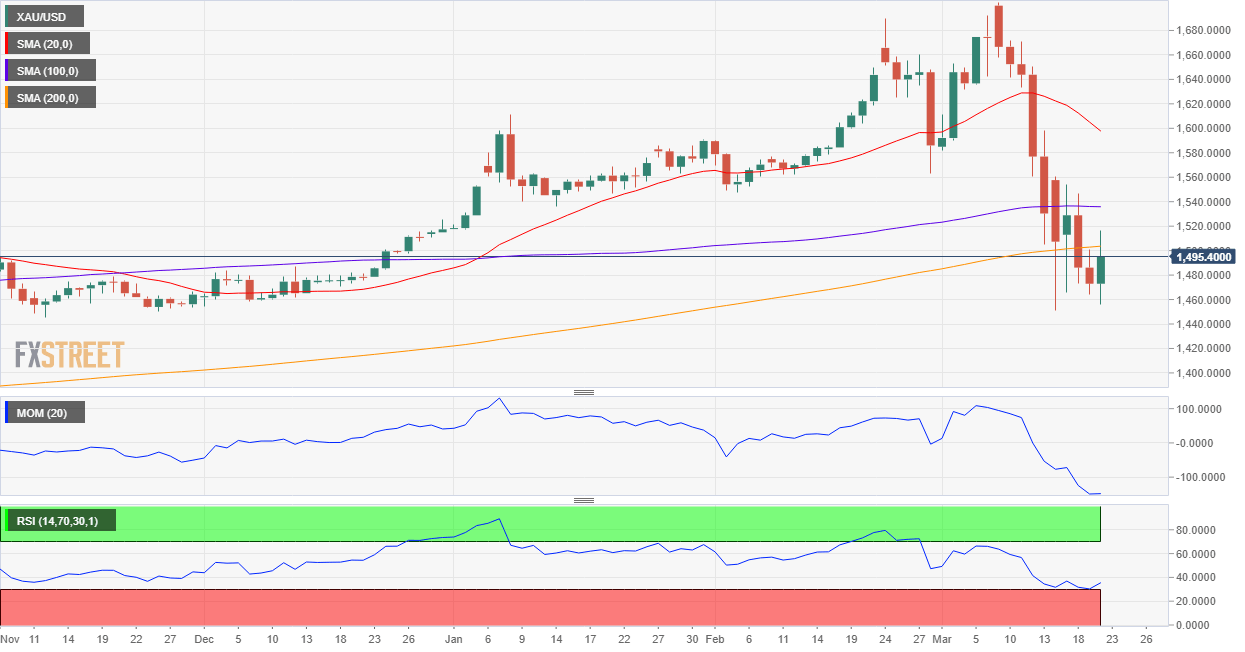 The FXStreet Forecast Poll shows that the bright metal is expected to consolidate around the current level next week, but those betting for higher-than-current levels are a majority in the monthly and quarterly perspectives. Bulls stand for 50% in the one-month view, and at 61% in the three-month outlook.

The Overview chart, however, paints quite a different picture, as despite most targets accumulate above the current level, moving averages offer sharp bearish slopes, at fresh multi-week lows, a sign that the market is moving fast to unwind gold longs, and that it will likely keep doing it.

EUR/USD Forecast: Don’t get too optimistic, this is just starting

GBP/USD Forecast: Sell the rally mode as the coronavirus crisis could get worse