The Federal Reserve has two official responsibilities, full employment and price stability. Neither was headed in the right direction in April.

Nonfarm Payrolls added just 266,000 jobs last month despite widespread expectations for a million or more and 770,000 new hires in March.

The Consumer Price Index jumped to 4.2% in April from 2.6% in March, its highest annual rate in 13 years and three times its pace in January. It had been forecast to rise to 3.6%. 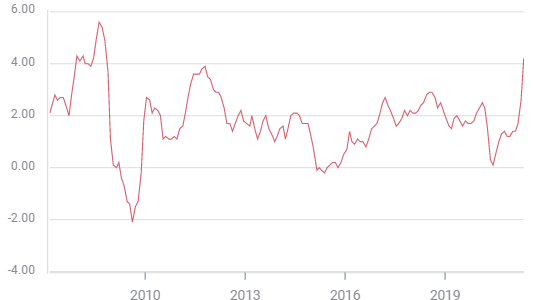 Federal Reserve policy has handled the twin challenges by meeting the first, employment, head on with policy and rhetoric, and placing the second, inflation, in abeyance.

Throughout the pandemic Federal Reserve policy makers have focused on replacing the jobs lost in the lockdowns. Chair Jerome Powell has repeatedly said that its policy will remain accommodative until the US economy and employment are fully recovered.

After the Federal Reserve Open Market Committee (FOMC) meeting whose edited minutes will be released on Wednesday, Fed Chair Jerome Powell noted to reporters, in an uncharacteristically brusque answer, that “We have had one great jobs report,” referring to the March NFP which was then 916,000. “That is not enough.”

It has been apparent since last year that when the annual inflation reports came around to the March and April figures they would show large increases due to the 2020 collapse in prices.

Last September's adoption of inflation-averaging, which lets policymakers ignore long periods of price gains above 2% target, was the Fed's preemptive strike at the annual increases we are seeing now.

The Fed governors wanted to be sure that these unavoidable inflation surges did not trigger a sharp bond market sell-off and rally in yields. No one on the FOMC wanted their own 2021 taper tantrum.

Fed Chair Powell has insisted on every public occasion that current inflation is a temporary phenomenon entirely due to the base effect from last year.

Vice-Chair Richard Clarida, speaking before the National Association for Business Economics last Wednesday, was the latest voice of this analysis.

“Readings on inflation on a year-over-year basis have recently increased and are likely to rise somewhat further before moderating later this year.” “ However, I expect inflation to return to -- or perhaps run somewhat above -- our 2% longer-run goal in 2022 and 2023.”

Clarida  assured the business leaders that the Fed was prepared to act if inflation or inflation expectation rose to undesirable levels.

Yet with inflation-averaging the Fed's diagnostic tool it is unclear, and more importantly unknown to the markets, just how long price increases would be tolerated before the Fed felt compelled to act.

“If we saw evidence that there was a risk of a persistent upward drift in inflation expectations we would not hesitate to use our tools to offset that,” said Mr. Clarida.

“The economy remains a long way from our goals, and it is likely to take some time for substantial further progress to be achieved,” he said, repeating Mr. Powell’s formulation from the FOMC press conference. .

“The near-term outlook for the labor market appears to be more uncertain than the outlook for economic activity,” he noted, adding that it may take some time to match workers to the jobs that are available for them after the pandemic. 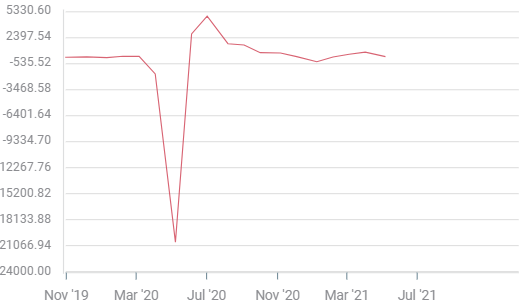 A short US inflation history

The Powell Fed has one interest rate for employment and inflation. Monetary policy cannot fight both economic weakness and high inflation at the same time, as the rate requirements are diametrically opposed.

Rate accommodation is an economic growth policy, its emphasis is employment. The Fed’s inflation policy is essentially hope, leavened with analysis.

A revival of stagflation would be a most unwelcome development after the economic and cultural debacle of the pandemic and its lockdowns.

The last time  the US suffered from raging price increases and anemic job growth was more than four decades ago during the presidency of Jimmy Carter.

At that time, Inflation had been building for 15 years and was seen as a dangerous threat to the long term economic health of the country.

President Carter appointed Paul Volker Chairman of the Federal Reserve in 1979. It was under newly elected President Ronald Reagan that the central bank hiked the fed funds rate to over 12% in 1980-81 and succeeded in breaking the inflation and inflationary expectation cycles. In doing so the Fed plunged the US economy into its deepest recessions, there were two, since the 1930s Depression.

Today's US economy is a long way from the economic and monetary conditions that built into the inflation of the 1970s. But the preliminary situation is not encouraging.

An economy that should be rehiring millions of workers is not, with the greatest number of unfilled jobs in history. Trillions of dollars in deficit spending have been lavished on the economy in a phenomenally short time, far more than can be efficiently or profitably utilized.  Consumer demand has run headlong into shortages across a wide range of raw materials, components and manufactured goods. 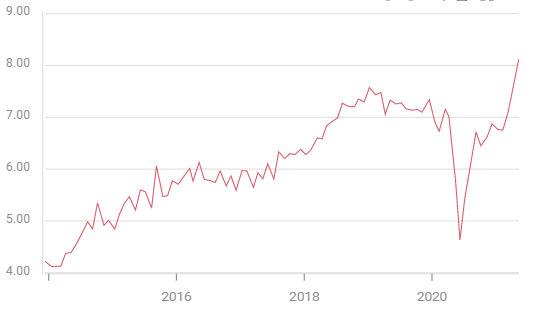 Suddenly, after years of disinflationary pressures from globalization, manufacturers and retailers are free to ask almost as much as they want and consumers will pay.

The Fed is undoubtedly correct that the main ingredient of the surge in prices since January is the contrast to last year's lockdown collapse.

But the residue of that economic policy, the shortages of raw materials and the ensuing commodity price escalations, the stifled then unleashed demand and the wage increases offered by business managers desperate to resume production, may be creating inflation expectations in the wider society unseen for a generation.

It will not take long for rising wages, quiescent for so many years, to convince workers that higher pay is there for the asking.

When business must compete for workers, the prime ingredient for a wage-price spiral is in place. Businesses will then increase their prices to compensate for their higher costs.

The Fed's public assurance that the main part of the current inflation surge is a temporary condition, is probably accurate. That does not mean that the underlying economic circumstances are not changing rapidly.

The Fed has staked out its economic and policy positions and there is little the bank can do in the immediate future but hang on and hope.

Hope that job growth resumes and is not impeded by Washington policy.

Hope that the ready wage increases do not make workers eager for more.

Hope that the material and component shortages ease before they effect drastic price increases for goods and services.

Hope most of all, that the next six months do not change the inflation expectations among consumers, workers, business and corporations.

The FOMC minutes are the best insight into the Fed’s intimate policy concerns.

Will they answer the pertinent question, how much hope does the Fed have?