Update April 12: While the broad market mood has remained upbeat, shares of Churchill Capital Corp IV (NYSE: CCIV) have come under renewed pressure. The stock closed Friday's session at $22.97, just below the battleground $23 level, and Monday's premarket trade is pointing to another drop to $22.90. While the moves are minor, some traders may be frustrated by the lack of action in the previously highly volatile stock. Investors await further developments related to Lucid Motors, the EV maker set to merge with Churchill.

CCIV shares refuse to participate in any market rally it seems, as the shares closed on Monday, April 5 down over 3%. This is despite the broader market powering higher and the electric vehicle leader Tesla adding over 4% to its share price. CCIV closed Monday down 3.3% at $23.

Just a little recap for those of you not familiar with the story. Churchill Capital IV is a Michael Klein-backed SPAC that merged with Lucid Motors to take it public. Michael Klein is a former Citi rainmaker with myriad connections in the financial markets. Lucid Motors is an electric vehicle startup that is due to release its first EV in the second half of 2021. The company is headed by a former Tesla chief engineer, Peter Rawlinson.

CCIV shares fell victim to the retail frenzy in evidence at the start of 2021 and rallied to extraordinarily expensive levels of nearly $65. The frenzy was mainly down to retail traders, who viewed CCIV and Lucid Motors as the next Tesla. Retail traders have grown increasingly frustrated at the lack of access to IPO deals and have turned to SPAC deals as a means of getting involved in a company early, akin to an IPO.

Now that the shares have repriced from the heady highs above $60 back to $23, where to from here? From a long-term, investible point of view, CCIV still looks expensive. The company has yet to roll out its first vehicle even though that is due shortly. Yes, it is an impressive looking car, but the auto industry is notoriously difficult and expensive to enter and grow. Tesla managed it as it was basically a pioneer in the whole EV space. This is where Lucid is pitching itself – but actually at the more lucrative end of the market. However, all major auto manufacturers are pivoting sharply to EVs as consumer demand for electric has increased. We are now at the point of no return. Recently, Volkswagen announced it would sharply ramp up its investment in EVs and associated battery technology. All other manufacturers have plans to go nearly or fully electric for the entire vehicle range between 2025 and 2030.

Lucid, by going after the upper end of the market, is placing itself in direct competition with BMW, Mercedes, Porsche, Tesla and others. This is serious competition. Porsche recently launched the all-electric Taycan. BMW has had the i8 supercar in production for a number of years, and Tesla itself is not going to let Lucid have a free run on the EV playing field.

Added to this, the valuation, even with the reduced share price, is just too high to make it investible just yet in my opinion.

However, let us ignore the big picture, longer-term fundamental view and find some key levels for short-term trading. Even though something may not be a long-term play, that does not mean short-term trends cannot be utilized to reap profits.

A break below support at $21.18 will likely see a move down to test $18. This will break out of the recent range and instigate a bearish trend with a lower low. 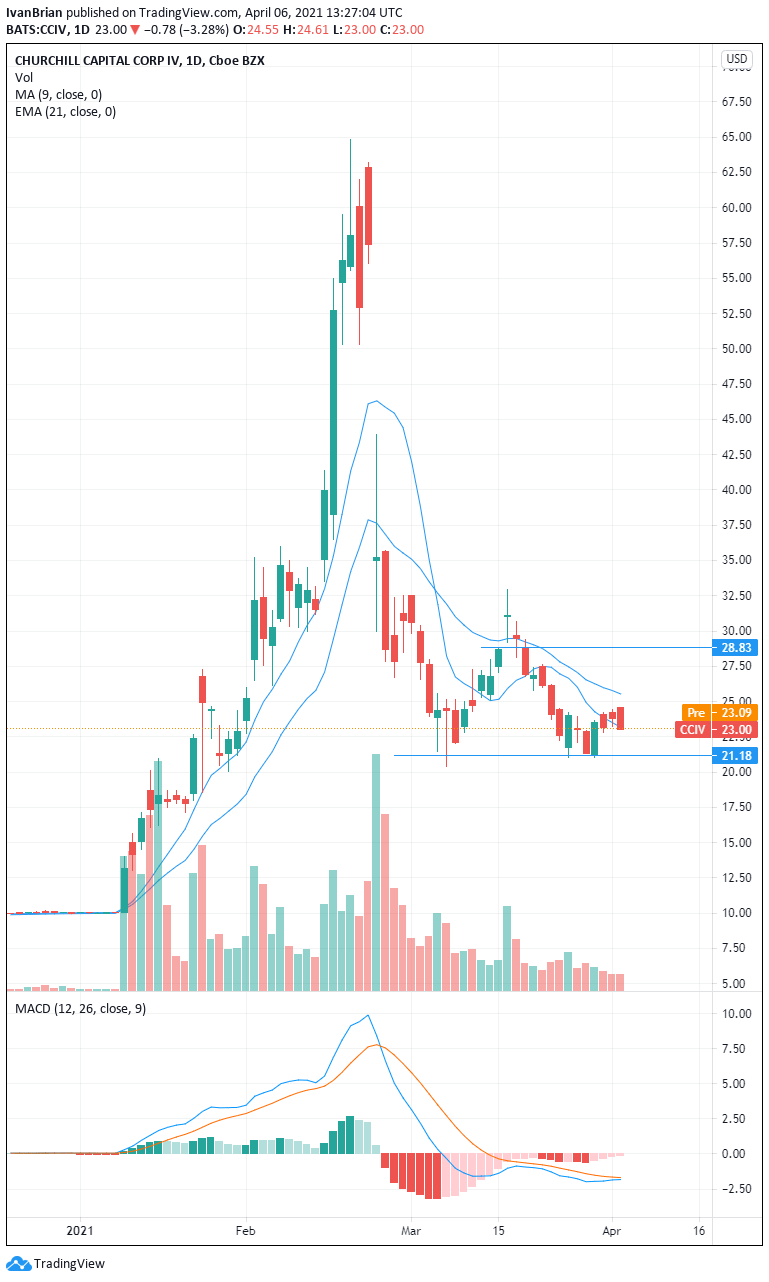 Update April 9: Churchill Capital Corp IV (NYSE: CCIV) is on a recovery path, set to rise for a second consecutive day on Friday. Broader stock markets seem content with the Fed's desire to heat up the economy rather than worry about inflation. Moreover, worries about chip shortages and previous concerns about investor overenthusiasm seem to have subsided. Friday's premarket trading is pointing to an increase of 0.26% on top of Thursday's 1.49% advance.

Update April 8: Two steps down, one step up – Churchill Capital Corp IV (NYSE: CCIV) shares are up around 2% and feel comfortable above $23.25 once again. The entire electric vehicle sector is recovering after a sell-off on Wednesday, triggered by concerns about a global chip shortage. The broader market mood remains upbeat on prospects of a vaccine and stimulus-led growth.

Update April 8: Churchill Capital Corp IV (NYSE: CCIV) ended Wednesday's trading session with a substantial drop of 6.7% to $22.82. It did not begin that way, with the equity holding up above $24 earlier in the session. However, the firm that is about to merge with Lucid Motors was carried lower by the broader sell-off in electric vehicle makers – and also those that produce internal combustion engine models. A global shortage of computer chips is weighing on carmakers and has sent other related stocks down. While Lucid is a smaller manufacturer, delays in production could also cause a postponement in sales.

Update April 7: Churchill Capital Corp IV (NYSE: CCIV) has surged by 6.4% on Tuesday, closing the trading day at $24.46. The jump came amid an upbeat market mood, as expectations for vaccine-led growth grew. The International Monetary Fund (IMF) raised its growth forecast and US President Joe Biden brought forward his target for offering vaccines to all Americans. Demand for Lucid Motors' cars may rise in response to elevated growth expectations. Moreover, bargain seekers have jumped on CCIV after shares suffered from the collapse of value in a "buy the rumor, sell the fact" on the SPAC merger between Lucid and Churchill.

Update April 7: A cautious mood has gripped markets on Wednesday after record-breaking sessions on Monday and Tuesday – and Churchill Capital Corp IV (NYSE: CCIV) is no different. Shares of the company about to merge with Lucid Motors are down around 1%, but holding above the $24 mark. The modest downward correction comes after shares have recovered.