Ripple is making headway despite being in a legal battle in the US for allegedly selling unregistered securities. The XRP price even shows signs of continuing its uptrend.

Novatti Group Limited, a leading digital banking and payments company, announced earlier that its partnership with Ripple is live.

The collaboration that was signed in December 2020 was focused on enabling cross-border transactions between Australia and the Southeast Asia region, specifically the Philippines.

This focus is delivering new customers, with Novatti now partnering with the Australian subsidiary of the Philippines’s largest non-bank, Filipino-owned, remittance service provider, iRemit, through RippleNet.2 This alone is expected to result in several thousand transactions a month being processed by Novatti through RippleNet.

Additionally, there are discussions to expand to new financial services clients in Southeast Asia.

This news comes after Ripple recently partnered with Tranglo, a Malaysia-based, cross-border payments hub. This partnership includes the use and expanding the reach of Ripple’s On-Demand Liquidity corridors, a payment method that leverages XRP.

Although the securities fraud lawsuit by the US Securities & Exchange Commission (SEC) initially caused panic among holders and service providers, Ripple seems to be flourishing in other parts of the world.

Ripple is forming a bullish pennant pattern, which constitutes a flag pole and a pennant. The 85% upswing that pushed the XRP price to $1 makes up the flagpole, while the consolidation that ensued in the form of lower highs and higher lows resulted in a pennant.

This setup forecasts a 45% bullish swing, which is determined by adding the flagpole’s height to the breakout point at $1.02.

A minor correction toward the lower trend line of the pennant seems likely after an explosive run-up. Regardless, a decisive close above $1.02 will signal a breakout from the setup and kick-start a 45% upswing.

If the buyers manage to push Ripple beyond the recent swing high at $1.07, it will serve as a secondary confirmation for the bull run.

The 127.2% and 161.8% Fibonacci extension levels will be crucial levels of interest. However, the XRP price target at $1.5 derived from the bullish pennant pattern is interesting since it coincides with the Momentum Reversal Indicator’s (MRI) breakout line on the daily chart. 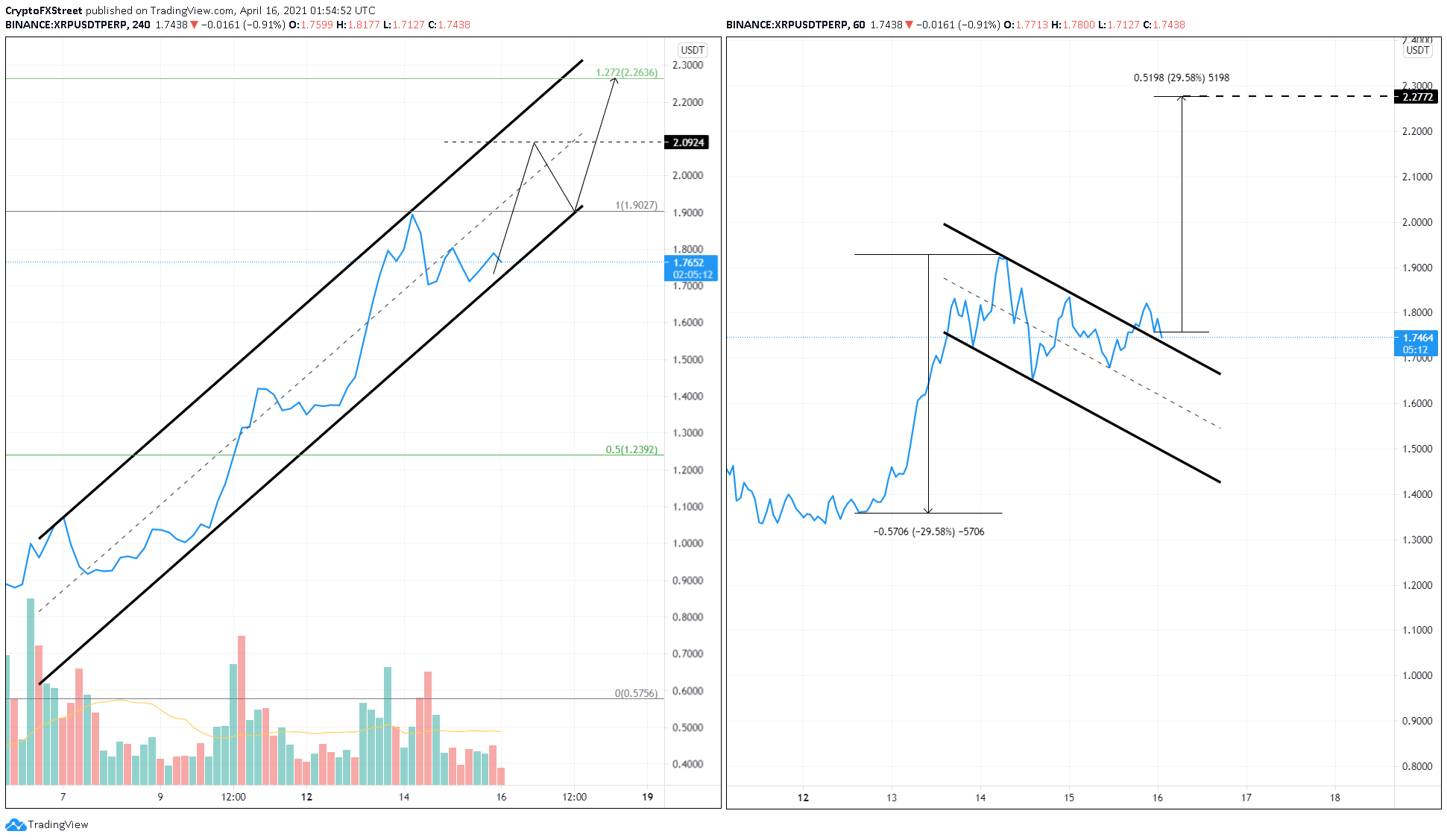 Regardless of the bullish technical patterns, investors should note that the MRI has flashed a cycle top signal in the form of a red ‘one’ candlestick on the daily chart. This setup forecasts a one to four candlestick correction.

If this bearish scenario were to play out, leading to a breakdown of the pennant’s lower trend line at $0.966, it would put the upswing narrative in question.

However, the bullish outlook will face invalidation if the sellers produce a lower low at $0.91. In such a case, the XRP price can be expected to slide toward the 61.8% Fibonacci retracement level at $0.88.