XRP price follows the overall cryptocurrency market lower today, with the price reaching $1.02 before it rebounded slightly. The short-term outlook for the cross-border remittances token is clouded by renewed legal volatility and technical wrangling.

XRP price will not hear catastrophic voices until $0.80 support fails

The much-followed Securities and Exchange Commission (SEC) against Ripple took another turn yesterday as the regulatory agency introduced a new legal filing. The filing seeks to have the court dismiss Ripple’s defense that there “was a lack of due process and fair notice,” arguing that the government had no legal duty to advise Ripple that XRP was a security.

According to the SEC, the Ripple argument that the SEC was legally obligated to warn Ripple does not find support in the Due Process Clause.

Ripple’s contention that the SEC must warn a market participant about its legal violation, or that the SEC must issue regulations or guidance before the SEC can exercise the authority Congress conferred on the SEC to enforce the securities statutes, finds no support in the Due Process Clause or any other principle of law.

The discovery phase of the SEC vs. Ripple lawsuit, a time when both sides fight over what information they need to share with the other side, will be marked by further gamesmanship, putting market speculators in the crosshairs of a potential legal hurricane.

Despite a bullish hammer candlestick pattern yesterday, market participants have not seized on the opportunity, choosing instead to push price lower as Ripple almost touched the psychologically important $1 earlier today.

It is important to recall that the $0.80 is critical to a long-term bullish view; a failure to hold would reintroduce the token to the oscillations of the price range associated with the right shoulder of the multi-year head-and-shoulders bottom pattern that triggered back on April 5.

For now, the bias is tilted to the downside until the hammer high at $1.20 is conquered. The 61.8% Fibonacci retracement of the April advance offers some support at the moment, but odds favor a test of yesterday’s low at $0.87. The 50-day simple moving average (SMA) at $0.84 is an additional target on further weakness. 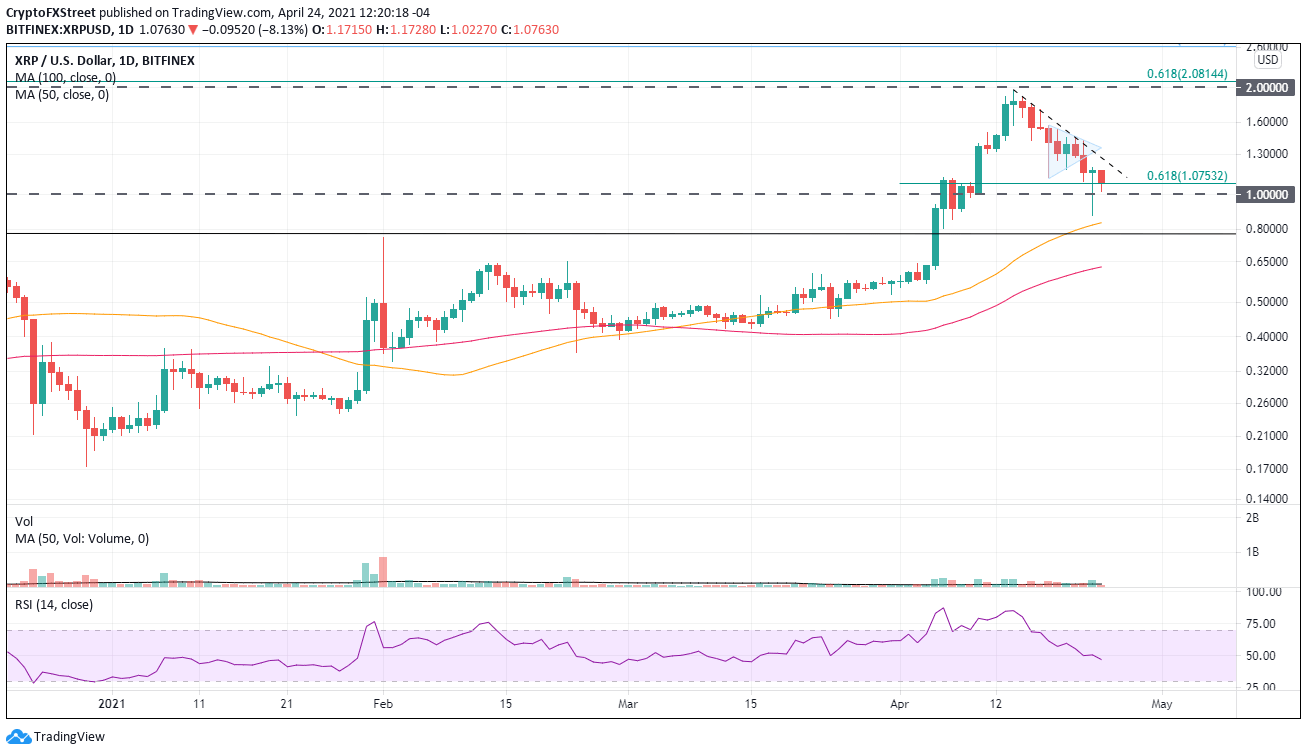 The path for Ripple is more complicated than some of the other cryptocurrencies at the moment due to the legal overhang. Still, the hammer high at $1.20 is fundamental to a bullish narrative followed closely by the declining trend line at $1.25. The price range determines the fate of Ripple.