XRP price is currently hovering above a crucial demand zone, a bounce from which failed to produce a higher high. Such a development indicates that the buying pressure is relatively weaker.

Market meltdown not too far

While the cryptocurrency market enjoyed a burgeoning bull run in 2021, things have gone awry over the past three months. Bitcoin price has been consolidating in a tight range, showing no apparent bias.

Former Prudent Bear Fund manager David Tice mentioned recently that the cryptocurrency and stock markets are in a dangerous phase. Two of his primary reasons include the rise in debt and the over-priced futures earnings.

While the markets have recovered swiftly after the COVID scare, Tice thinks that “we are not out of the woods yet.” The investor added that his fund was long Bitcoin since $10,000, but hitting $60,000 pushed the flagship cryptocurrency into the overpriced zone. Tice mentioned that around the same time as this rally, the uproar among central bankers has increased, further adding credence to his bearish thesis.

With the big crypto moving sideways, XRP and other altcoins are taking a hit. Most cryptocurrencies have all declined more than 50%, indicating that the investors are cashing out.

XRP price has dipped into the demand zone ranging from $0.547 to $0.568 on July 17 and rallied only 7%. This weak upswing indicates inadequate buying pressure from the bulls.

So long as Ripple price fails to produce a higher high above $0.621, the chances of a downswing that pierces the said demand zone increases.

Therefore, going forward, investors can expect the remittance token to slice through $0.568 and produce a 4-hour candlestick close below $0.547. This move will confirm that sellers are in control, opening up a path to the range low at $0.509, a 12% downswing.

If the buyers fail to rescue XRP price here, the immediate support levels at $0.509 and $0.496 are likely to be tagged. 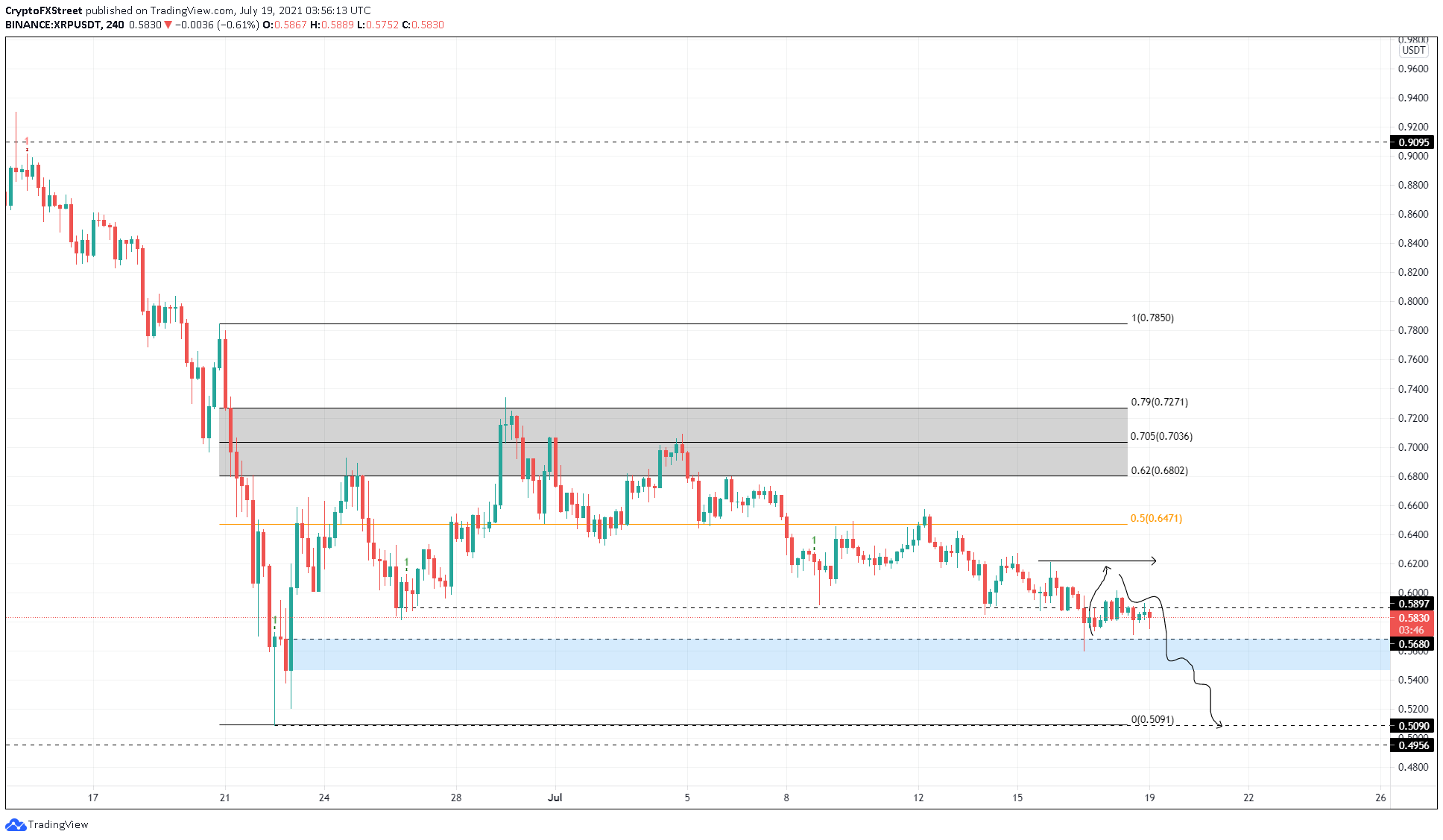 While this down move seems plausible, investors should note a bounce from $0.568 could revive the upswing if XRP price manages to produce a swing high above $0.611. Such a move would confirm the presence of buyers and invalidate the bearish outlook.

Moreover, if the bid orders continue to build up after this uptrend, the buyers could propel Ripple to the 50% Fibonacci retracement level at $0.647.