XRP price action clearly shows extended periods of consolidation followed by a breakout and continuation of this, indicating a fractal nature. The latest coil-up and breakout structure was seen in early February and the remittance token is likely to repeat a similar outlook.

XRP price began its consolidation after rallying 26% between February 24 and 26. Since then, Ripple has been stuck trading in a range, indicating a lack of volatility and a potential accumulation.

The six-hour demand zone, extending from $0.687 to $0.705 is the base of this consolidation and will also serve as a launchpad for a breakout and expansion.

As for the upside targets, XRP price is highly likely to sweep above the $0.856 level to collect the buy-stop liquidity resting above the equal highs formed here. However, this barrier is not the last stop for XRP price.

A resurgence of buying pressure will extend the run-up to $0.917, where Ripple set equal highs on February 8 and 9. This run-up would constitute a roughly 20% ascent from the current position of $0.754. 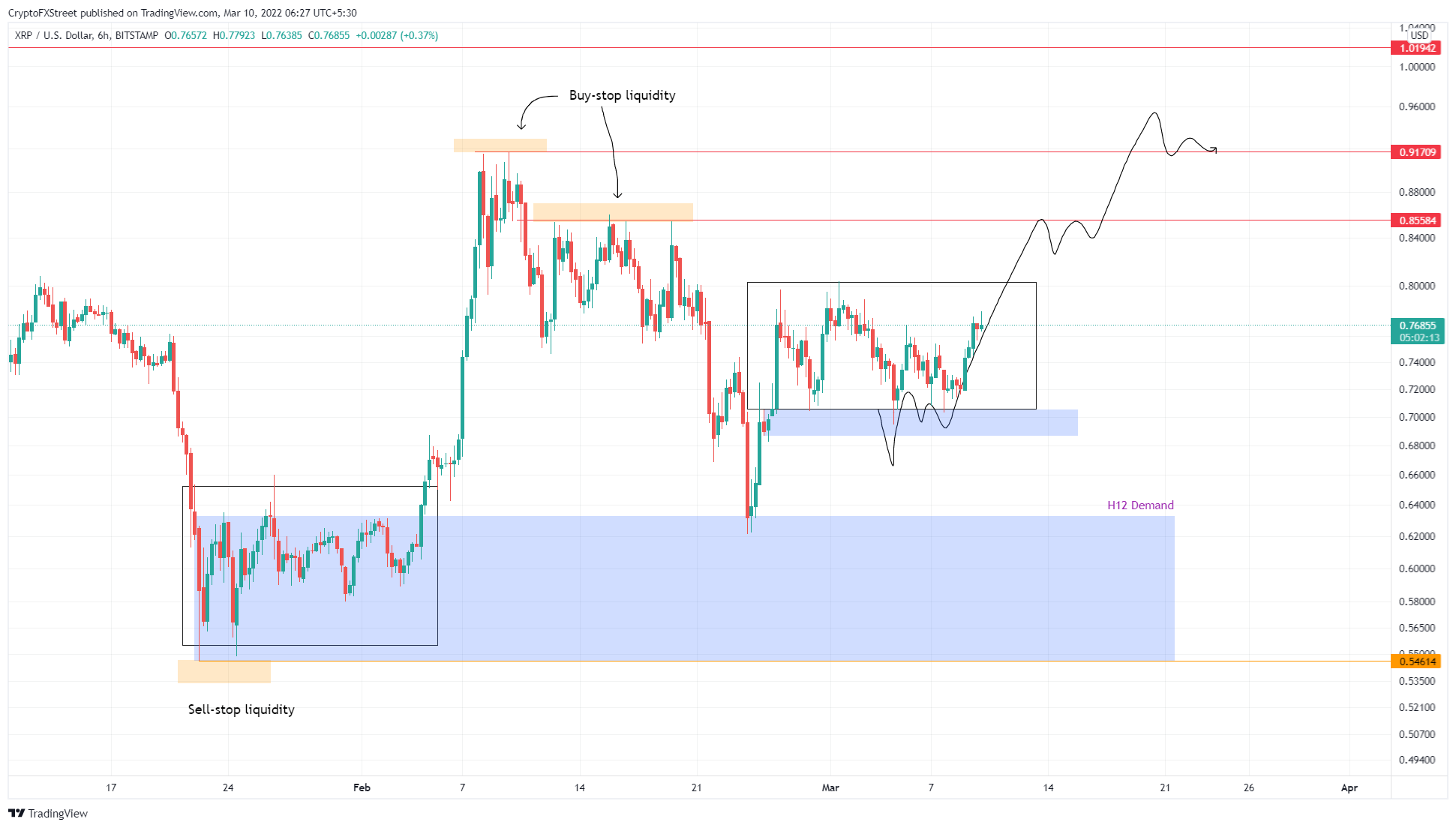 Supporting this consolidation outlook for XRP price is the Market Value to Realized Value (MVRV) model. This on-chain metric is used to determine the average profit/loss of investors that purchased XRP over the month.

This index recently flipped positive and is currently hovering around 0.905%. This value suggests that there isn’t any imbalance in the holders and that a potential sell-off is unlikely. Interestingly, a similar movement was seen with the 30-day MVRV in early February when the consolidation led to a 50% upswing. Due to the fractal nature of this outlook, such a setup adds credence to the breakout thesis.

The whale transaction count on-chain index tracks the number of transfers worth $100,000 or more and can be used as a proxy of their investment interests. This metric is currently hovering at 452 after producing multiple lower highs since the consolidation began on February 26.

Although the value of large transfers is declining, the pattern is strikingly similar to the one seen during the early February consolidation that led to a 50% breakout move. Hence, investors can expect XRP price to follow a similar path.

On the other hand, if XRP price produces a six-hour candlestick close below the $0.687 support level will invalidate the bullish thesis. In this case, the remittance token will revisit the twelve-hour demand zone, extending from $0.561 to $0.633, where buyers can give the uptrend another go.