XRP price could restart its parabolic upswing as technicals and on-chain metrics point to a massive bullish breakout.

On the 4-hour chart, XRP price reveals that its hyperbolic upswing was contained within an ascending parallel channel. This technical formation is a result of higher highs and higher lows connected using trend lines.

The recent surge to $1.96 has seen a 10% retracement toward the channel’s lower trend line. Now, a bounce from this level seems likely. Therefore, a potential spike in buying pressure could push XRP price up by 20%, the immediate supply barrier at $2.09.

A swift yet decisive close above this level could set the stage for another 8.2% surge to the 127.2% Fibonacci extension level.

Interestingly, the 1-hour chart shows that the 42% upswing from $1.35 to $1.92 followed by a consolidation has formed a bull flag pattern. This setup contains an initial burst in XRP price, known as the flagpole, followed by a downward sloping channel, referred to as the flag.

Ripple recently broke out of the flag’s upper trend line, triggering a 30% upswing to $2.27. This target is obtained by adding the flagpole’s height to the breakout point at $1.75.

Interestingly, the setup’s target forecasted on the 1-hour time frame coincides with the projection on the 4-hour chart to the 127.2% Fibonacci extension level. 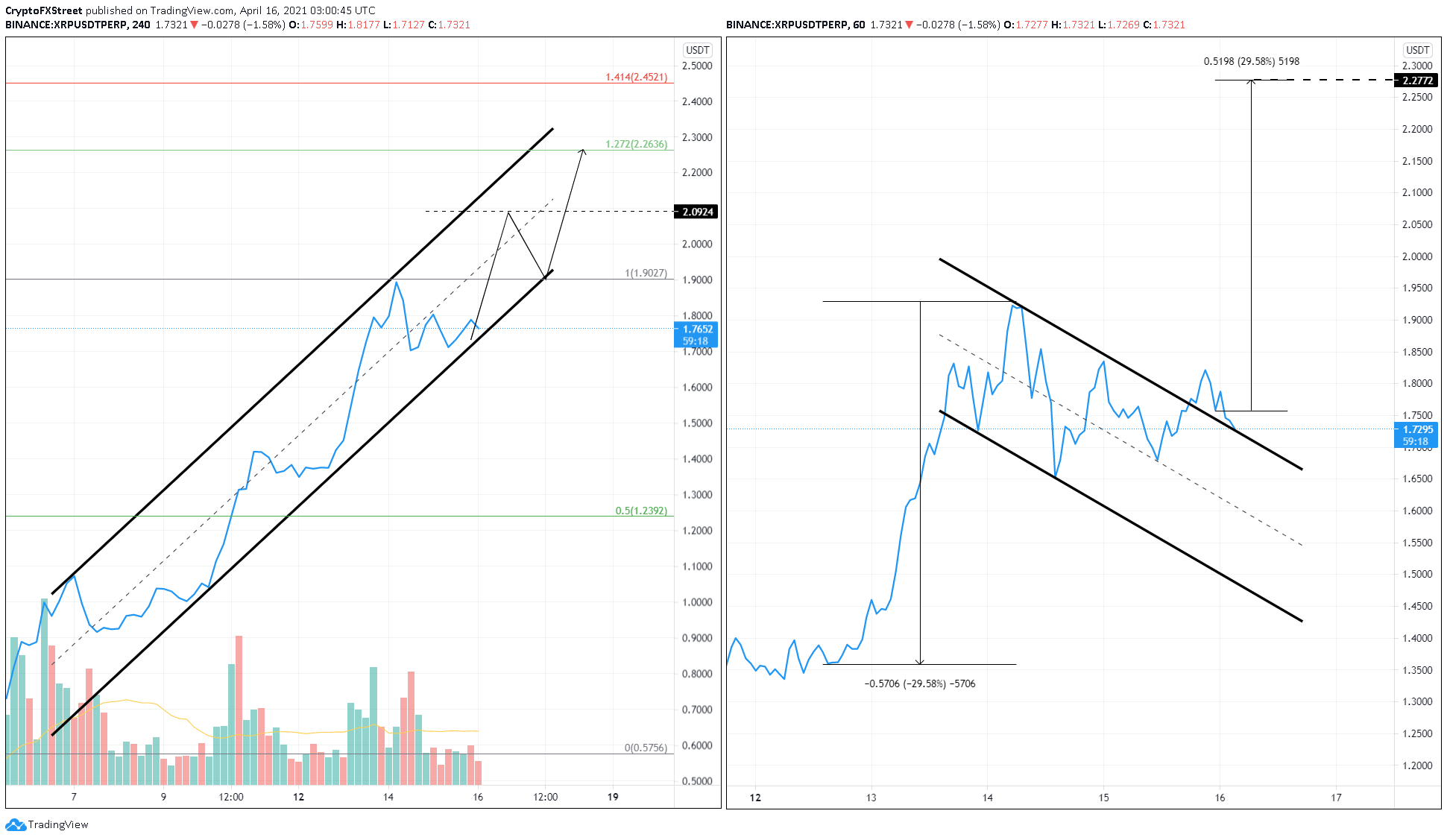 Adding credence to the bullish thesis is the 71% drop in Ripple’s funding rate, as seen in the chart below. This reduction from 0.38% to 0.11% indicates a fall in long positions compared to the rally's start on April 10.

Often, such a reset in funding rate provides traders an opportunity to reopen their longs.

Moreover, Twitter's weighted sentiment on Ripple has seen a collapse from 5.04 to 1.92, suggesting that the remittance token’s hype has subsided. Therefore, this slump sets up the stage for a spike in XRP price from a counter-sentiment perspective.

While everything seems to be looking for XRP price, a breakdown of the ascending parallel channel’s lower trend line at $1.70 could put the bullish narrative at risk.

A decisive 4-hour candlestick close below $1.67 will signal the start of a new downtrend. In such a scenario, the Ripple price might drop 12% to $1.45.