Institutional interest in cryptocurrencies continues to rise as a pension fund in the United States has made a substantial purchase in Bitcoin and Ether as the leading cryptocurrencies recently reached new all-time highs.

Crypto became an asset class the fund ‘could not ignore’

The Houston Firefighters Relief & Retirement Fund (HFRRF), which has over $4 billion in assets, recently invested $25 million in Bitcoin and Ether through the New York Digital Investment Group (NYDIG), a subsidiary of asset management firm Stone Ridge.

The chief investment officer of HFRRF, Ajit Singh, stated that the recent investment in the top two cryptocurrencies by market capitalization was a tool to manage risks and that it has a positive expected return with little correlation to every other asset class.

Singh added that he preferred direct tokens rather than investing in futures-related products. He expects that with more institutional adoption in the crypto market, there would be an increase in dynamics that develop for supply and demand. He further stated that holding the physical assets would give the fund the possibility of income generation potential.

The firm has been studying the new asset class before adding Bitcoin and Ether to its investment portfolio. Singh concluded that cryptocurrencies became an asset class that the fund “could not ignore anymore.”

JPMorgan Chase & Co. strategists believe that inflation concerns acted as the main fuel behind the crypto rally, driving Bitcoin and Ether to all-time highs rather than the hype generated by the first BTC exchange-traded fund (ETF) launch in the United States.

The strategists added that the perception of Bitcoin as a better inflation hedge than gold is the main reason for the recent cryptocurrency surge, as investors have shifted away from gold ETFs into BTC funds since Q3.

Ethereum price is searching for a foothold following its new all-time high that was reached on October 21. The prevailing inverse head-and-shoulders pattern projects a 25% rise from the chart pattern's neckline, with a bullish target at $4,639.

The first line of defense for Ethereum price is at the support trend line at $3,974. Further support will emerge at the 78.6% Fibonacci retracement level at $3,793. Slicing below this level may see ETH tag the neckline of the technical pattern at $3,690. 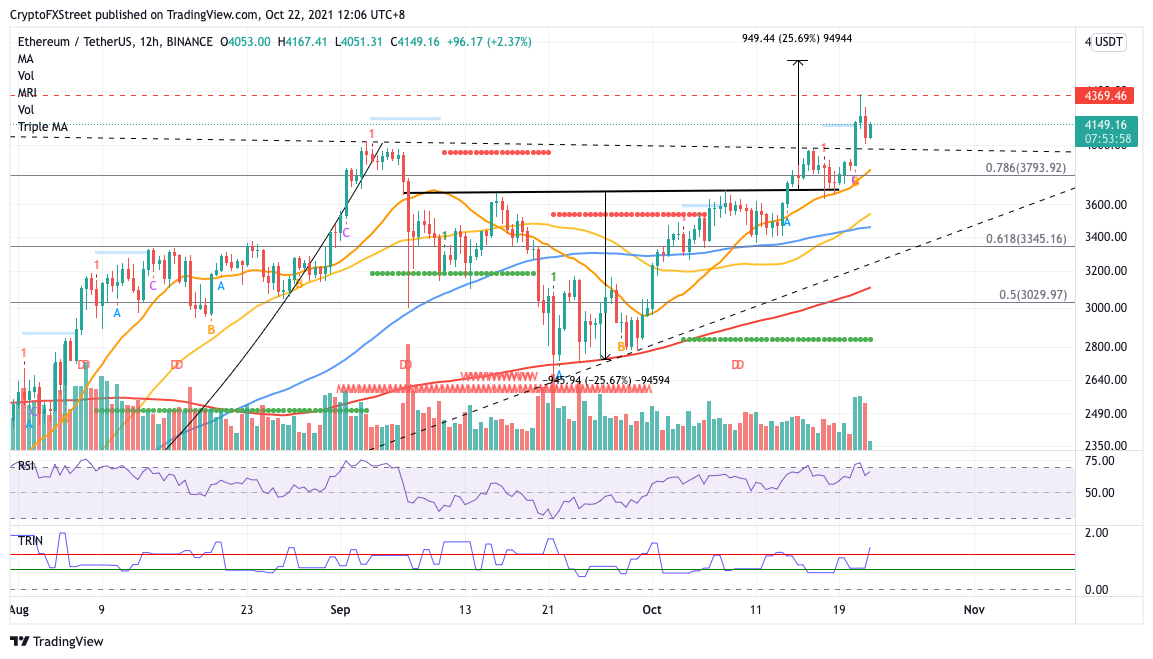 However, the bullish outlook would be ruined if Ethereum price falls toward the 50 twelve-hour Simple Moving Average (SMA) and 100 twelve-hour SMA at $3,545 and $3,463, respectively.

Ethereum price must climb above the resistance level at $4,369 to put the optimistic target on the radar.