Bitcoin price reached an all-time high of over $67,000 on October 20 and the bellwether cryptocurrency is starting to retest key support levels. While BTC dropped to roughly $62,000 on most exchanges, traders on Binance US witnessed a flash crash of 87%.

Bitcoin price suffers 87% fall due to a bug

Bitcoin price rapidly dropped 87% on the Binance US exchange on October 21, as BTC reached a low of $8,200 from approximately $65,000, while the leading cryptocurrency’s price remained above $60,000 on other exchanges. The bellwether cryptocurrency quickly snapped back to its correct price following the flash crash.

According to Binance US officials, one of its institutional traders indicated to the firm that they had a bug in their trading algorithm, which may have caused the massive sell-off. The leading crypto exchange continues to look into the event and added that the institutional trader has fixed its bug and that the issue has been resolved.

Errors that cause flash crashes occur in the finance industry when traders accidentally make mistakes in the details of their intended trades by entering the incorrect price or order size. Large block trades could overwhelm the exchange’s order book, leading to a massive flash crash.

Bitcoin price continues to trend within an ascending parallel channel on the 4-hour chart. While BTC tagged the upper boundary of the governing technical pattern when it reached its all-time high at $67,000, the bellwether cryptocurrency is nearing the downside trend line of the chart pattern.

Bitcoin price may discover immediate support at the 50 four-hour Simple Moving Average (SMA) at $61,647. An additional foothold may emerge at the lower boundary of the parallel channel at $61,072, which coincides with the support line given by the Momentum Reversal Indicator (MRI). 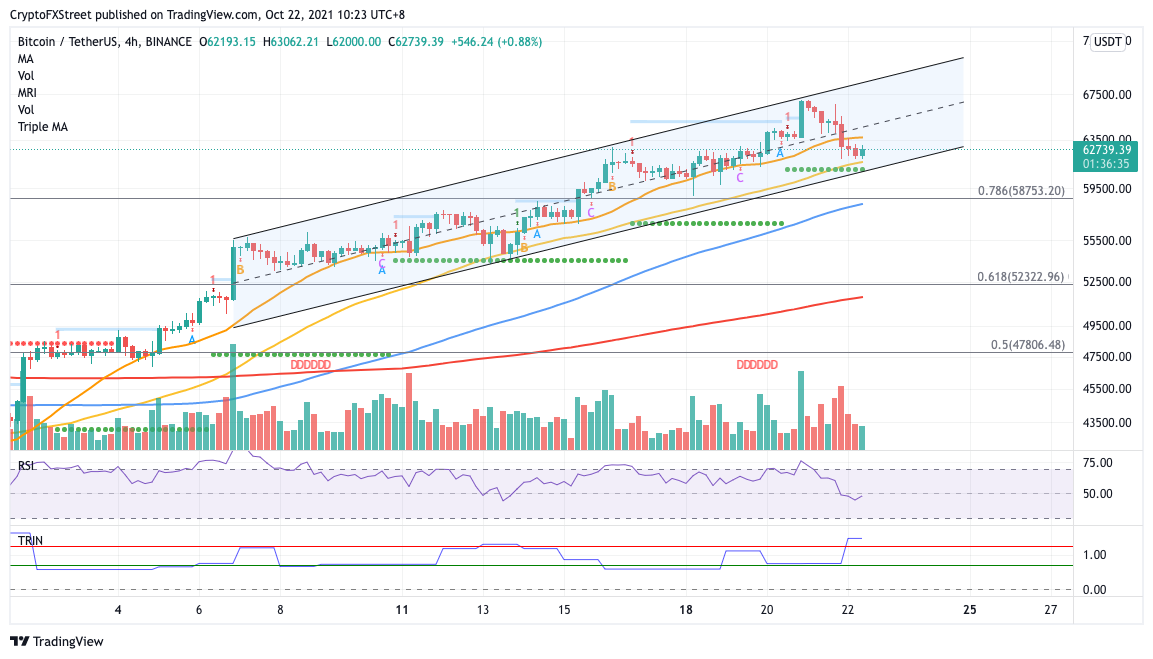 If selling pressure overwhelms the bulls, Bitcoin price may fall further to reach the 78.6% Fibonacci retracement level, which sits near the 100 four-hour SMA at $58,753. Lower levels are not expected unless a massive spike in sell orders materializes.

The 20 four-hour SMA at $63,831 acts as the first level of resistance for Bitcoin price after market participants engaged in profit-taking. Only slicing above this level and $64,691, the middle boundary of the governing technical pattern, would see BTC retest its all-time high.