The Ukrainian government may soon legalize cryptocurrencies as a bill has passed to allow banks to take on digital asset company accounts. Should the bill be signed into law, citizens who hold the new asset class would be able to be protected in case of theft.

Ukrainians are the top adopters of cryptocurrencies

Bitcoin and other cryptocurrencies have been in a legal gray area in Ukraine so far, despite being the country with the most adopters of digital assets in 2020.

The bill, drafted by the Ministry of Digital Transformation, is expected to go into effect in the coming months after the president signs the new legislation. The tax code would also be required to be amended prior to passing the bill into law.

The draft bill states that the law will regulate legal relations in connection with the turnover of cryptocurrencies in the country. In addition, it will also outline the rights and obligations of digital asset market participants.

Unlike the recent move for El Salvador to adopt Bitcoin as legal tender, Ukraine’s new legislation does not include the gateway for cryptocurrencies to be used to pay for goods and services.

However, Ukrainians would be able to purchase and trade cryptocurrencies freely, and blockchain businesses could work directly with the current banking system.

So far, the crypto legislation has been passed, with 276 lawmakers supporting the law, while only six were against the bill.

The main motive behind the bill seems to be protecting those who hold Bitcoin and other digital assets and clarifying its legal stance in the country. Law enforcement agencies in the country previously treated cryptocurrencies as a scam, which resulted in crypto businesses being raided.

Cryptocurrency exchanges would be able to operate in the country legally.

Bitcoin price bounce back not on the horizon

Bitcoin price continues to retrace after the market crash that pushed the leading cryptocurrency below $43,000. BTC is struggling to find support as it heads lower to tag the 100 twelve-hour Simple Moving Average (SMA), which sits near the 50% Fibonacci retracement level at $44,121.

Currently, the 50 twelve-hour SMA and the 61.8% Fibonacci retracement level act as stiff resistance for Bitcoin price. Accompanied with accelerated selling pressure, BTC must hold above the aforementioned support to save itself from dropping lower. 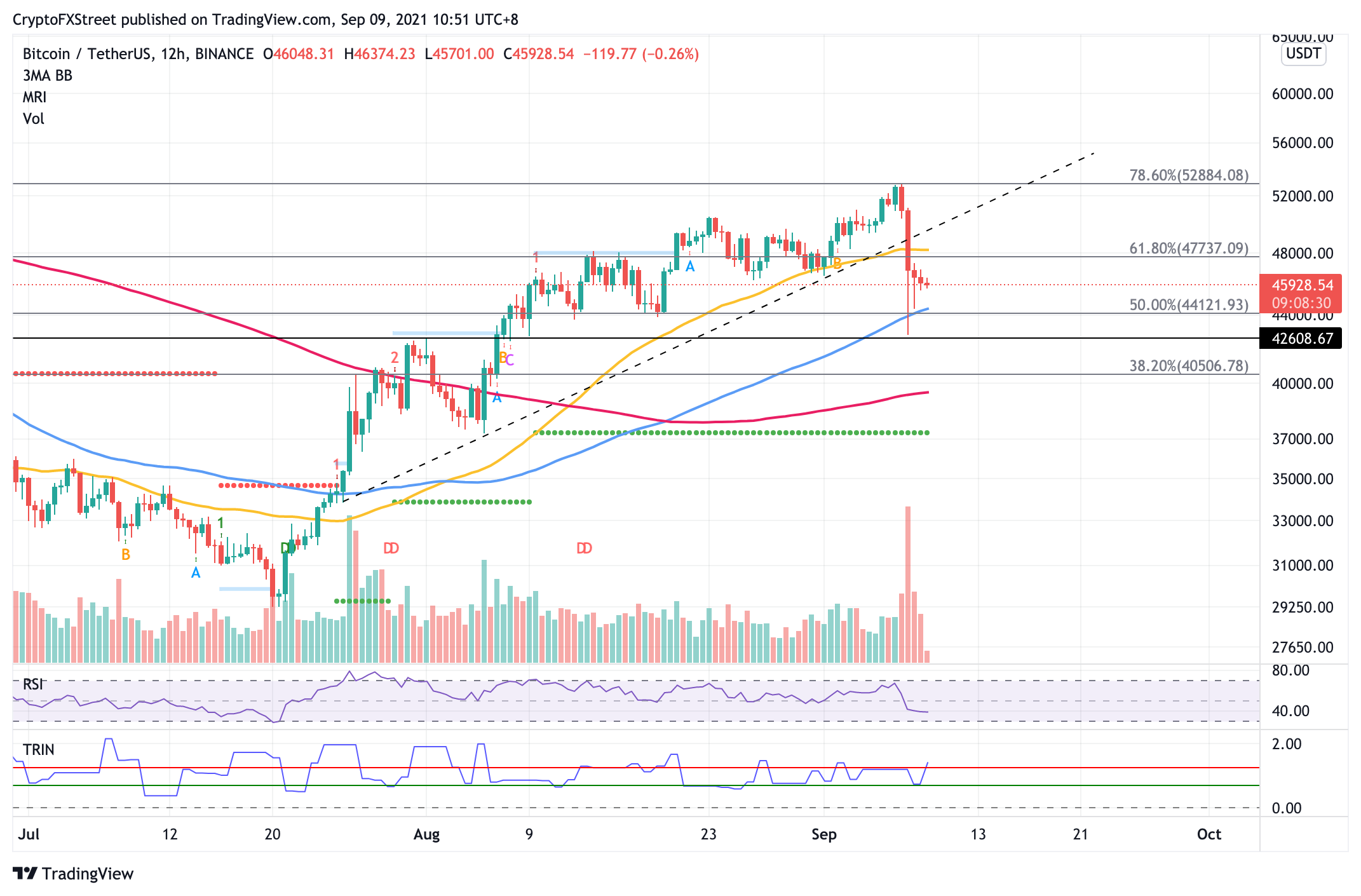 Further support may arise at the July 31 high at $42,608 before Bitcoin could face the risk of slumping toward the 38.2% Fibonacci retracement level at $40,506.

Although a recovery remains distant, should the bulls plan to reverse the period of underperformance, slicing above the diagonal resistance trend line at $50,000 could see Bitcoin price aim for bigger aspirations.