Salvadoran president Nayib Bukele previously announced that the country’s Bitcoin wallet Chivo would be available on the day the BTC law was implemented. However, the state-run crypto wallet has faced technical difficulties on the day of its launch, while the bellwether digital asset crashed to lows of under $43,000. The nation’s president took advantage of the plunge and purchased 150 more Bitcoins.

The Latin American country’s president said that the Chivo Wallet would be available the same day the Bitcoin law comes into effect. The leading cryptocurrency became legal tender on September 7 in El Salvador.

As explained by President Bukele, the Chivo Wallet would allow users to receive $30 in Bitcoin after they download the application. However, there was a slight delay, and the Chivo team temporarily halted the service given the lack of server capacity. To solve this problem, the team reconnected the wallet to higher-capacity servers.

Users of the Chivo Wallet have claimed that the initial $30 that was credited to users could only be sent to other Chivo merchants and participants, and withdrawals were only enabled after the funds have been passed through a few transactions in the Bitcoin wallets.

During El Salvador’s “Bitcoin Day,” the bellwether cryptocurrency’s price crashed by over $7,000 in less than an hour, leading to $2.6 billion in liquidations. President Bukele took this opportunity to double down on his BTC bet by purchasing 150 new coins.

Bukele also thanked the International Monetary Fund (IMF), which has previously criticized the Bitcoin law he put forward, for the recent BTC price plunge. The IMF and other institutions have expressed their worries about the nation making the cryptocurrency legal tender.

According to Bukele’s tweet, the country now holds 550 Bitcoins and saved a million dollars in printed paper.

Bitcoin price lost $7,000 of its value in a span of minutes on the day El Salvador’s Bitcoin law was implemented. BTC fell below $43,000 but quickly recovered to nearly $47,000 at its daily close.

During the crash, Bitcoin price broke below the 200 four-hour Simple Moving Average (SMA) under $47,242, which currently acts as resistance for BTC.

However, Bitcoin price is also struggling with another obstacle that sits at the 50% Fibonacci extension level at $46,711. Should BTC fail to sustain trading above this level, it may fall further to tag the support line given by the Momentum Reversal Indicator (MRI) at $44,166. 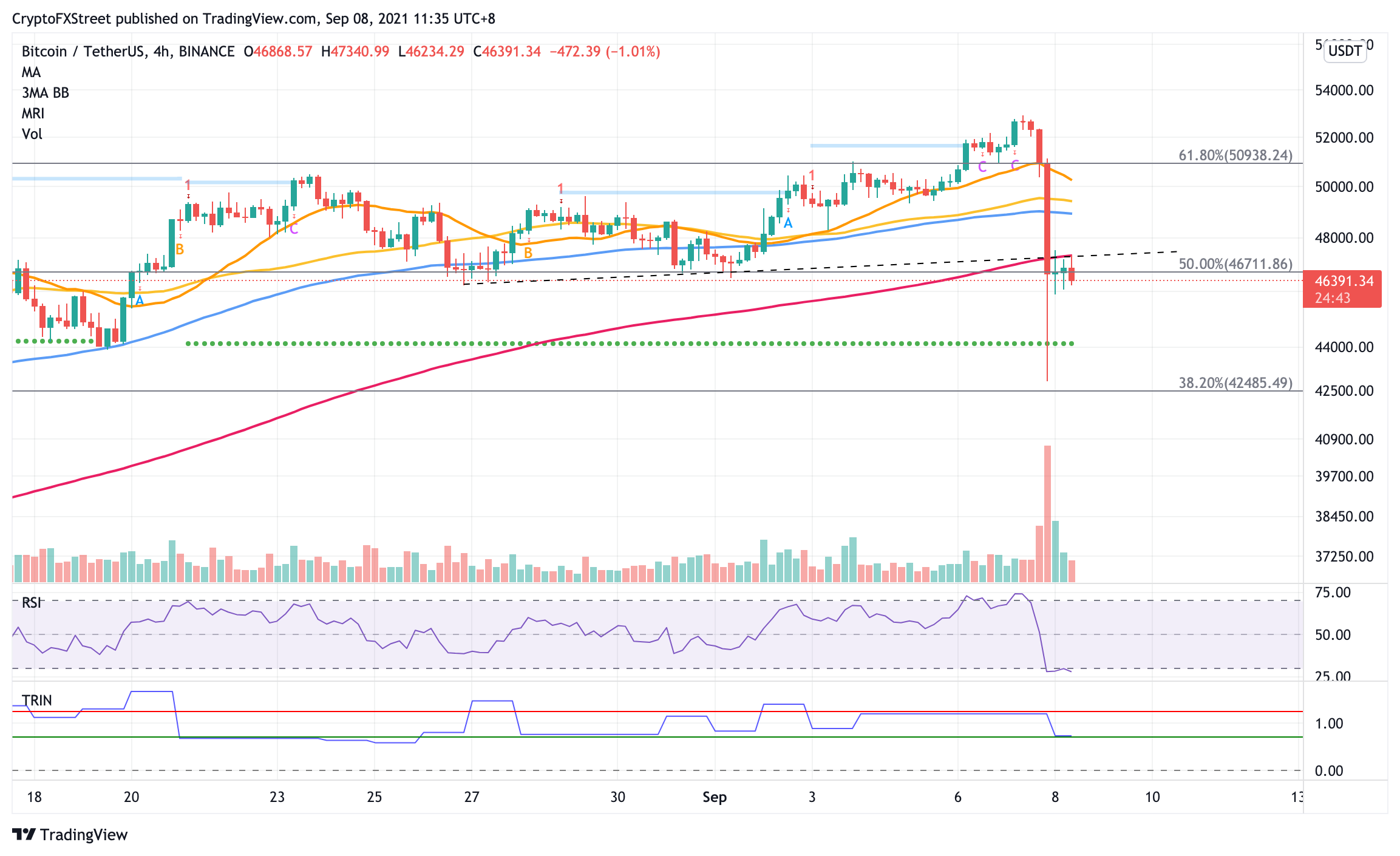 Only a close above the 200 four-hour SMA and diagonal trend line could see Bitcoin price recover its uptrend in the near term. BTC may look to target the 100 four-hour SMA should buying pressure increase.

Investors should note that the Relative Strength Index (RSI) suggests that Bitcoin price has been slightly oversold amid the plunge, indicating that selling pressure may soon ease up.