Bitcoin price action continues to digest the drop found on Wednesday as prices continue their slow slide south. Ethereum price completes a seven-week uptrend, creating a likely turning point and a corrective move extremely likely. XRP is at risk of a 48% drop if it fails to hold its Ichimoku support levels.

Bitcoin price nears its final support before a push down to $54,000 could occur

Bitcoin price is currently testing its final Ichimoku support level, the Kijun-Sen ($63,250), before deciding whether to bounce or collapse. If Bitcoin fails to hold the Kijun-Sen as support, then the next support level within the Ichimoku Kinko Hyo system is the top of the Cloud at $54,250. That would represent a 15% drop from Friday’s open. On the other hand, if Bitcoin does fall to that level, then $54,250 should hold because $54,250 is the 61.8% Fibonacci extension and the weekly Tenkan-Sen. 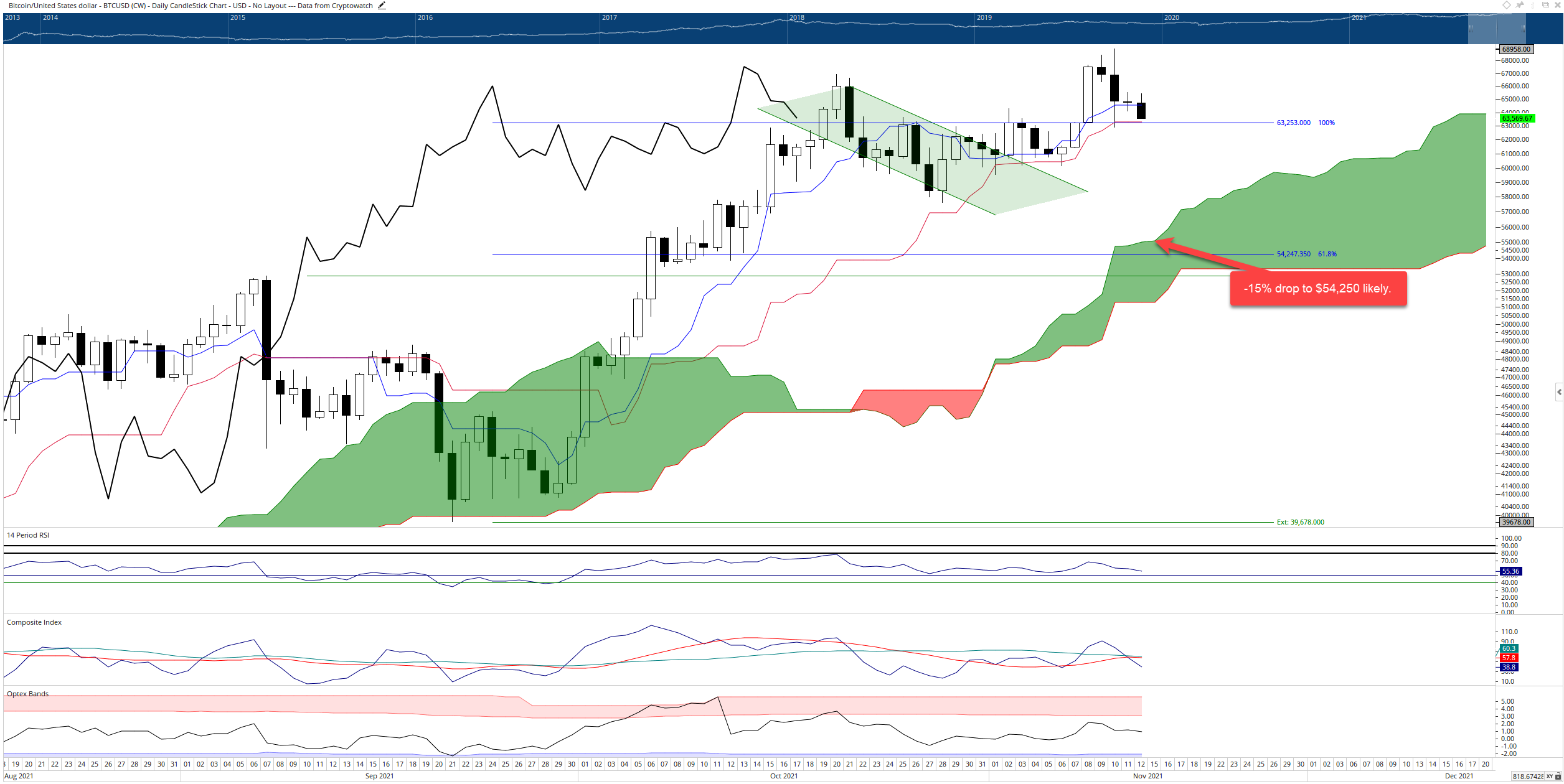 If support does hold at the Kijun-Sen, then sideways price action over the weekend would be the most likely scenario traders would observe. In that scenario, Bitcoin would likely pause and wait for the weekly Tenkan-Sen to move higher to return to equilibrium with Bitcoin price.

Ethereum price, despite making new all-time highs, is under threat of making a deep corrective move due to a powerful Gann time cycle that Gann referred to as his ‘Death Zone’ cycle. This cycle is a forty-nine to fifty-two-day cycle (seven weeks). Gann wrote that a violent corrective move is likely if an instrument is trending at a steep slope over seven weeks. Ethereum is a textbook example of this cycle. Given the significant gaps on the weekly chart between the candlestick bodies and the Tenkan-Sen, a corrective move is increasingly likely. 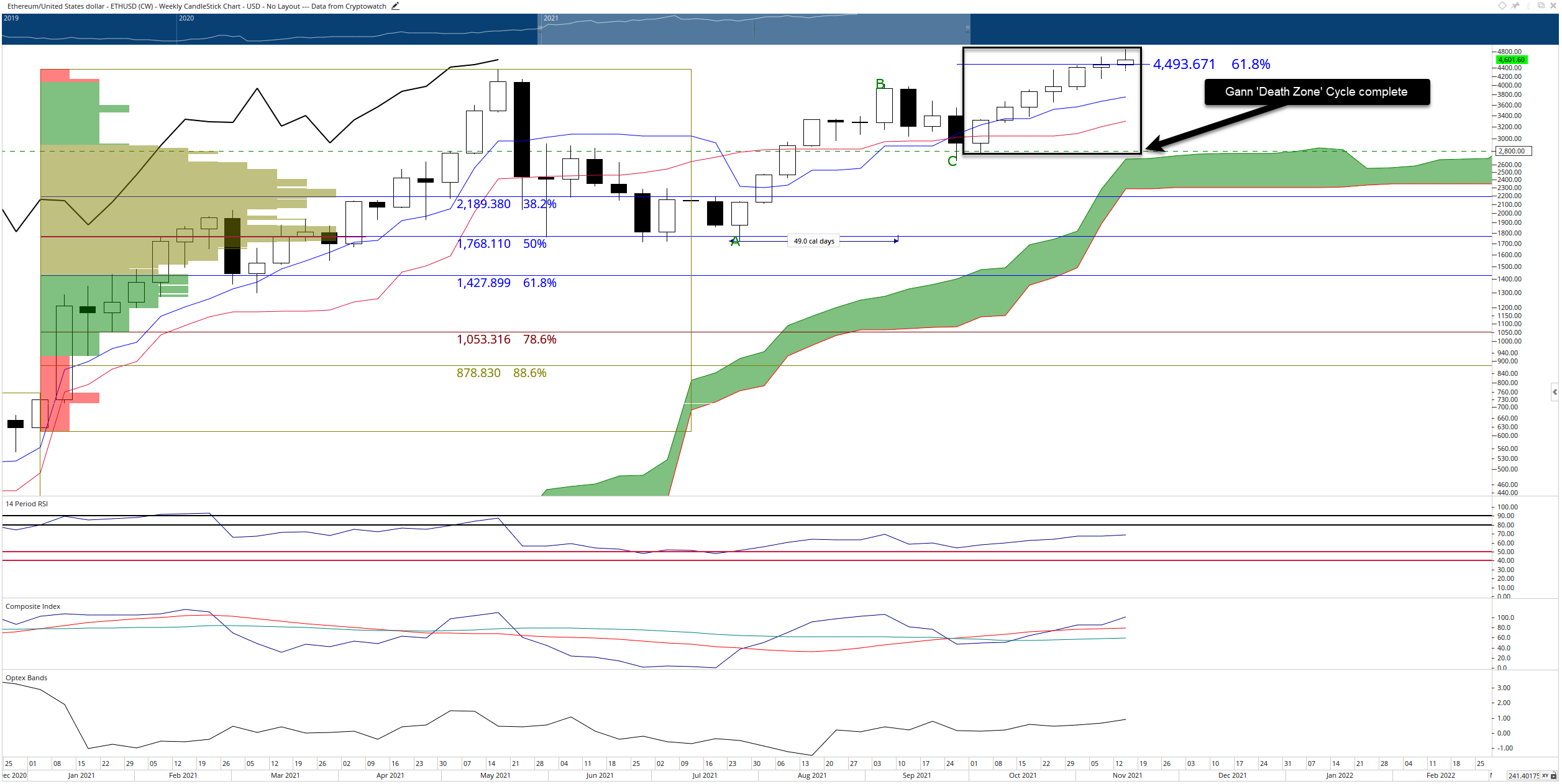 The projected retracements for Ethereum are the Tenkan-Sen at $3,750 and the Kijun-Sen at $3,300. A move down to either of those levels would fulfill a return to equilibrium in the Ichimoku system, creating sufficient conditions for a resumption of a strong bullish expansion phase. Of course, any near-term bearish projections will be eliminated if Ethereum goes parabolic and makes new all-time highs.

XRP price action could generate a nasty bull trap if it moves below $1.00

XRP price is in a longer-term bearish continuation pattern known as a bear flag (red channel). The primary support level that XRP must hold is the bottom of the Cloud (Senkou Span A) and the 2021 Volume Point Of Control, both at $1.09. Below that, only the Chikou Span can support XRP. As a result, bears will likely target a strong short setup on any close at or below $0.98 to target the $0.65 to $0.70 value areas. 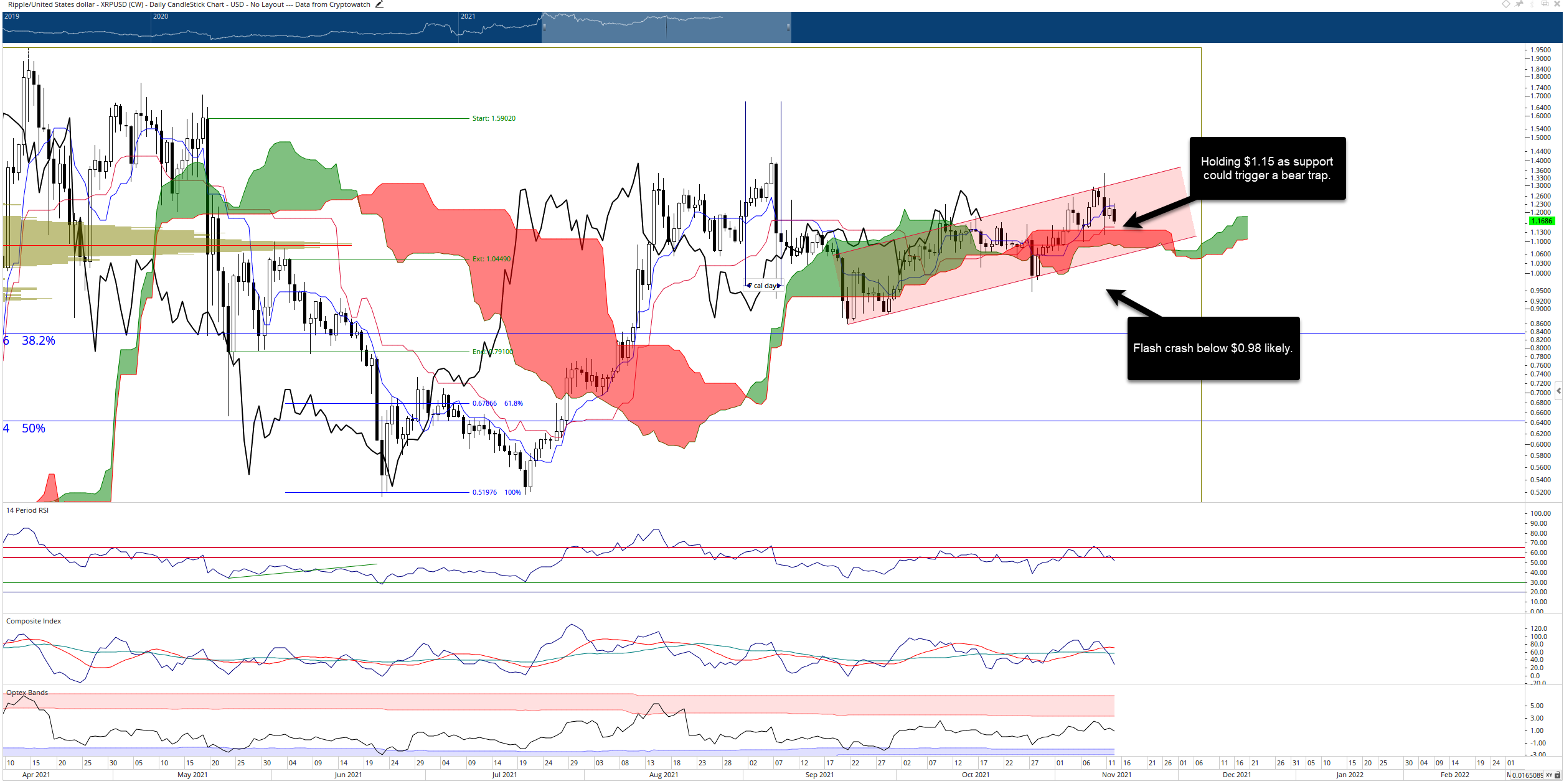 To invalidate the current bearish setup, buyers need to support XRP price above the bear flag and above the November 8th close at $1.29. Bulls could also surprise any short-sellers by holding the Kijun-Sen and Senkou Span B at $1.15 as support.