Solana price has witnessed a considerable surge, climbing over 1,000% since mid-July this year. The Ethereum-killer’s rally is not over yet, as SOL could be repeating history as a massively optimistic target has been put on the radar since a bullish chart pattern has formed. The altcoin, which ranks fifth by market capitalization, could easily outperform ETH as the two tokens compete for adoption.

He added that not a lot of other blockchains have been focusing on scalability and reducing fees, including Ethereum. Bankman-Fried highlighted that mass-scale application businesses would need to be able to take on hundreds of millions to billions of users and transactions per second.

Ethereum transactions take a comparatively long time to get processed, and its gas fees – transaction fees – are relatively high. The ETH alternative, Solana allows users to pay much lower fees and receive faster transaction times. The benefits that the SOL protocol provides incentivize users to stay within the ecosystem, especially for decentralized finance applications and non-fungible token (NFT) purchases.

As Ethereum gas fees are back on the rise while activity on the network is picking up, users could see the Solana blockchain as a viable alternative. Since the protocol was launched in April 2020, SOL price has risen by around 16,000% so far this year, becoming the fifth-largest cryptocurrency by market capitalization in less than two years.

Solana price has formed a bull pennant pattern on the daily chart, suggesting an outlook that swings in favor of buyers. By measuring the flagpole of the technical pattern, SOL is expected to climb 89% and reach $310.

Since the breakout above the upper boundary of the prevailing chart pattern at $166 on October 20, the bullish outlook was validated and SOL already surged 57%, reaching its all-time high at $260. Solana price is now only 19% away from the upside short-term conservative target at $310. 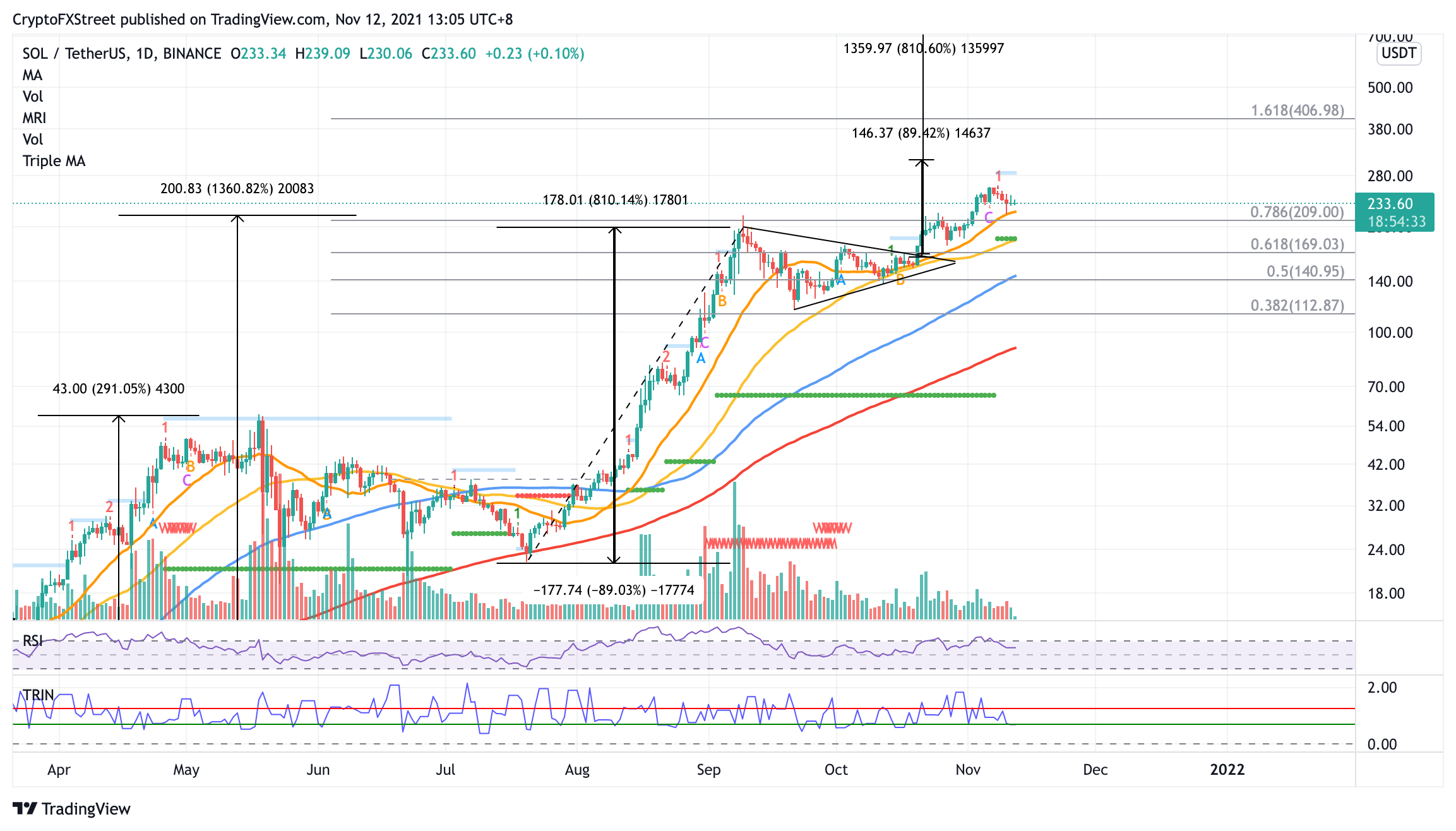 In the longer term, Solana price has the potential to climb 800% toward $1,523, the measurement of the ascent from the bottom to the top of the flagpole of the bull pennant. Although this figure may seem large at first, SOL has seen a tremendous run of over 1,300% since the last time the token has presented the same chart pattern.

The bull pennant pattern that formed on December 22 and broke out on March 26 presented a 94% upside target for SOL but realized a 290% bull run. The slice above the topside trend line of the pattern at $14 has eventually witnessed Solana price surge by 1,360%, reaching the top of the flagpole of the most recent chart pattern at $215. 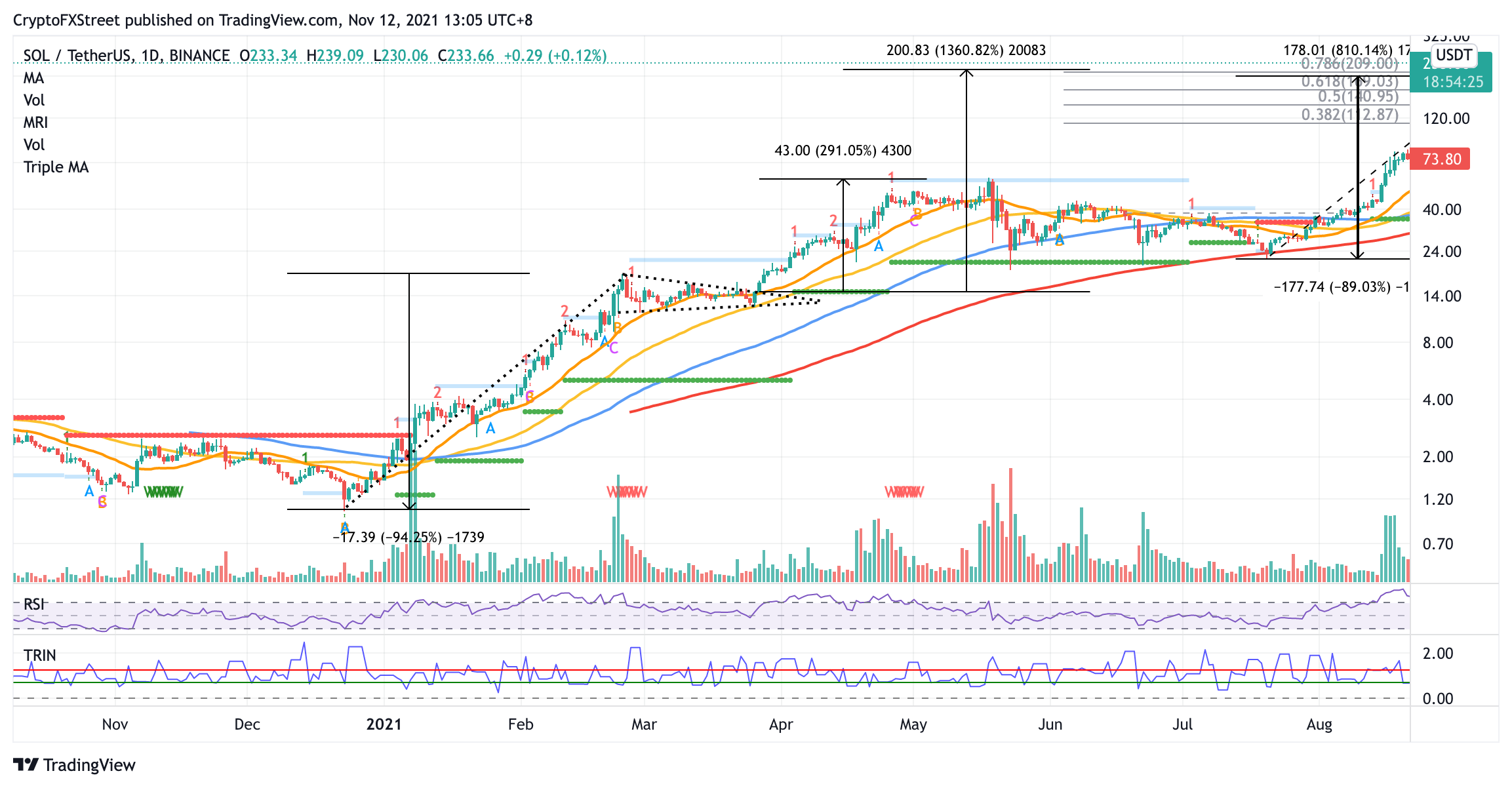 However, Solana price could see periods of retracement and correction as the token explores reliable support before ascending higher. SOL could discover immediate support at the 21-day Simple Moving Average (SMA) at $222, then at the 78.6% Fibonacci retracement level at $209.

Additional lines of defense may emerge at the 50-day SMA, which coincides with the support line given by the Momentum Reversal Indicator (MRI) at $184, then at the 61.8% Fibonacci retracement level at $169.