Bitcoin price is showing its most bullish pattern in 2021 so far, as it pulls back to support from a prior ceiling level before the next slingshot higher. If successful, this move could put BTC extremely close to a six-digit per coin value.

On-chain metrics are also leaning bullish, with interest from investors increasing at a constant pace. All of this, combined with the more widespread adoption of the big crypto, suggests that the last two months of 2021 and Q1 of 2022, are likely to be a period cryptocurrency enthusiasts will be looking forward to.

One area in which Bitcoin adoption is expanding is as a municipal asset. Miami and its Mayor Francis Suarez are taking Bitcoin adoption to a new level by announcing that every citizen with a digital wallet will earn dividends in BTC. This development comes off the heels of the launch of CityCoin, known as MiamiCoin, in August.

CityCoins give the power back to communities by launching a city’s cryptocurrency token. While Miami launched its coin in August it is not the only city: New York released its own coin “New York Coin” on November 10.

Staking MiamiCoin has earned an excess of $21 million in yields, which if yield generation continues at a similar rate, Mayor Suarez believes will enable the city to cover its tax needs. The Mayor further added that all citizens of Miami would be given a generated wallet, which will receive free BTC dividends.

On the adoption side of things, BitWise is optimistic about the approval of a “spot Bitcoin ETF.” Matt Hougan, the CIO at investment company, stated,

Ultimately, what many investors want is a spot Bitcoin ETF. We think that's possible. So Bitwise will continue to pursue that goal, and we will look for other ways to help investors get access to the incredible opportunities in crypto.

BitWise dropped out of the Bitcoin futures ETF race because of this reason as it continues to focus on a spot ETF.

While the adoption in the west continues, the Indonesian Ulema Council (MUI) classifies Bitcoin and cryptocurrencies as haram. For the people to be allowed to trade these assets, they have to abide by the Shariah guidelines and show a clear benefit.

Bitcoin price breached a bullish pennant pattern, signaling a continuation of the 65% uptrend that transpired between September 30 and October 20. The initial leg-up, referred to as the flagpole, was followed by a consolidation that squeezed BTC price together to form a pennant. Together, this technical formation is a bullish pennant, which forecasts a 38% upswing obtained by adding the flagpole’s height to the breakout point at $62,760.

On November 8, Bitcoin price breached through the pennant, indicating a breakout, but since then, BTC has retraced and is currently aiming to retest the 2-day demand zone, ranging from $60,521 to $63,620. This pullback will allow BTC to build up steam before propelling 38% to $86,836.

On its way to the intended target, Bitcoin price will likely take a break at the 161.8% Fibonacci extension level at $77,908. In some cases, this run-up could extend another 15% to tag the $100,000 psychological level. 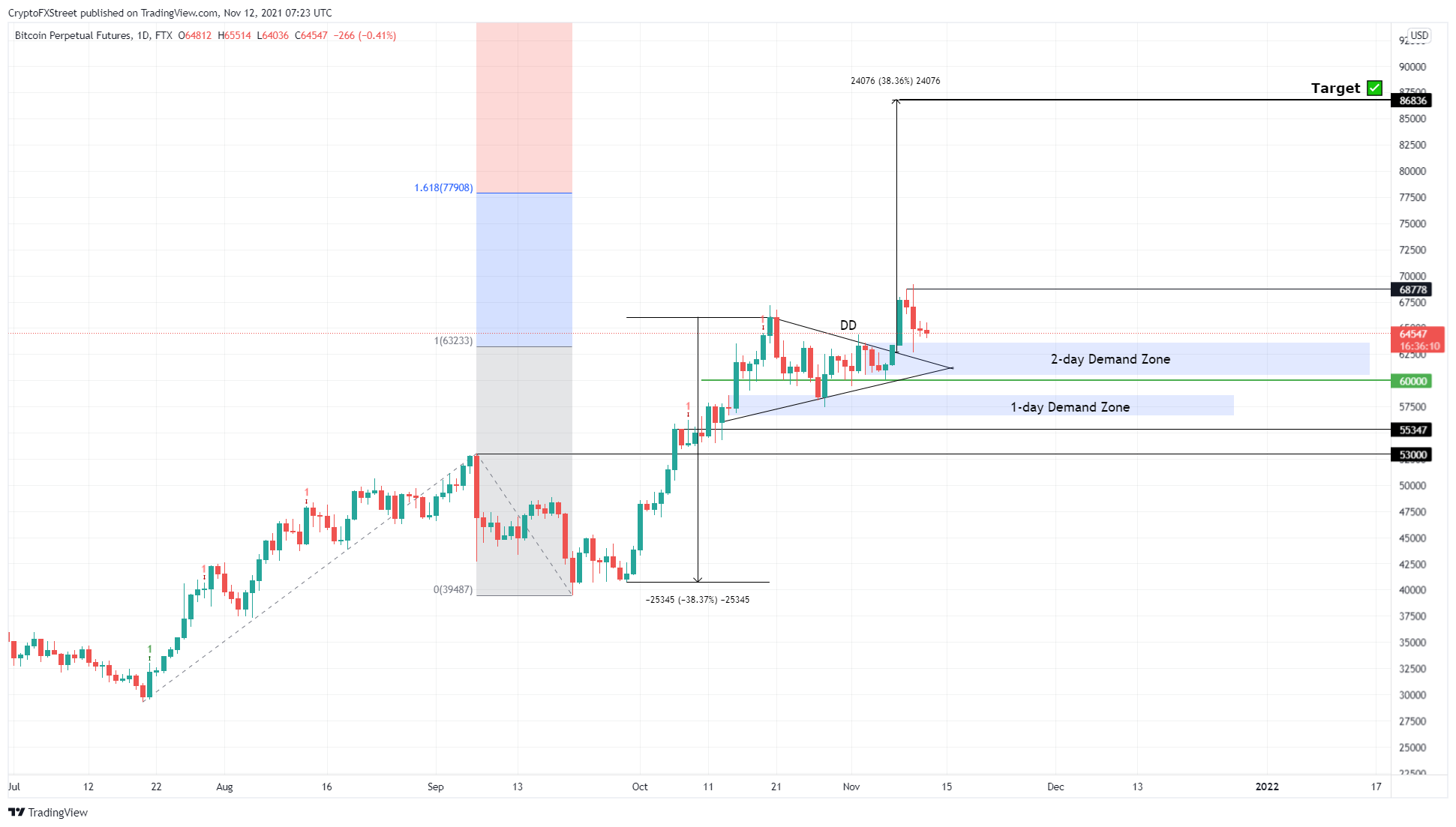 Supporting this bullish outlook for Bitcoin price are the daily active addresses, which are hovering at 958,000. This number has increased steadily by 20% since late July. This climb indicates  that investors are returning to invest in BTC, suggesting a bullish narrative in play.

The estimated leverage ratio for all exchanges, which shows the extent investors are using leverage in their trades, reached an all-time high of 0.199. Since then it has started to decline and is currently hovering at 0.189, suggesting a reset in the number of leveraged positions. Perhaps, this is due to the November 10 flash crash. However, this development is undoubtedly good for Bitcoin price as it unwinds the market, given it will eventually allow the price to climb higher.

From a short-term perspective, the 30-day Market Value to Realized Value (MVRV) model has reset and is currently displaying 1%. This on-chain metric is used to determine the average profit/loss of investors that purchased BTC over the past month.

The flash crash seems to have reset the metric, suggesting that an upswing is plausible.

While things are looking up for Bitcoin price, investors need to note that the Fear and Greed Index shows that there is “Greed” in the market. An increase in this metric that pushes it into the “extreme greed” territory will suggest that another correction might be due. 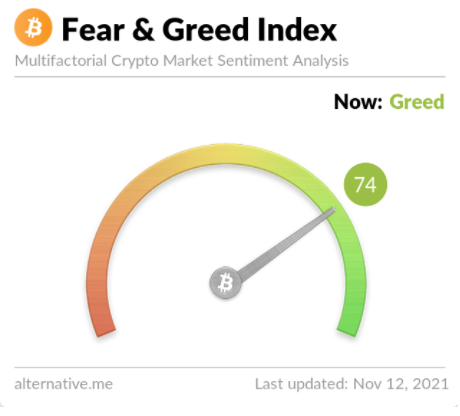 Bitcoin price will probably remain bullish as long as it stays above the 2-day demand zone, extending from $60,521 to $63,620. A breakdown below this area will indicate that the optimistic narrative faces massive overhead pressure and is likely to fail. Confirmation of this will come  from BTC closing below $60,000 on a daily basis.