The crypto market has broken its five-day consolidation to the upside. Key levels have been identified to gauge where cryptocurrencies may find resistance moving forward.

Bitcoin price back within the range

Bitcoin price currently auctions at $23,084, as profit is being taken on smaller time frames after rallying 5% earlier in the day. While the bulls have accomplished a new high on the month at $23,816, the daily settle has closed within the previous five-day range. The retracement could suggest problematic market behavior in the days to come.

It is evident now that the BTC faces significant resistance near $24,000. Since BTC is already up 40% since January 1, traders may want to move their stop losses higher to secure profits in the event of a stronger decline. A second attempt at the daily low at $22,300 could catalyze a stronger move to the downside with key targets at $20,719 and $19,695. The best bearish scenario creates the possibility for a 15% decline from Bitcoin's current market value.

Ethereum price witnessed the largest red day in 2023 as the decentralized smart contract token fell by 4% on January 23. Since the breach, the ETH price has pulled off an impressive 180, rallying by 5% and reconquering the $1,600 zone.

Ethereum price currently auctions at $1,623. The back-and-forth price action is sure to trap traders on one side of the market. Currently, the bears are holding more risk as the January 25 auction settled with a 5% gain above the 8-day exponential moving average.

The next trade will likely propel ETH into the $1,700 zone, resulting in an additional 7% increase in market value.

Invalidation of the bullish trade idea could arise from a sweep of the recent low at $1,523. A second attempt at the low would lead to a much stronger decline targeting the 21-day simple moving average at $1,490, and potentially the $1,400 barrier. The Ethereum price would decline by 15% under the bearish scenario.

XRP price has a decision to make

XRP price Is up 2% on the day as the bulls have bounced from a previous resistant trend line. The breached trend, which acted as resistance between January 14 and January 20 when XRP traded at sub-0.400 price levels, provided cushion space for bulls to enter the market during an early afternoon sell-off on January 25.

XRP price currently auctions at $0.415. At the current time, the back-and-forth price action this week is a firm signal that the market will witness a strong move in the coming days. If the direction is north, the Ripple price will tag November's broken support zone at $0.440. The bullish scenario creates a potential 7% spike from XRP's current market value. 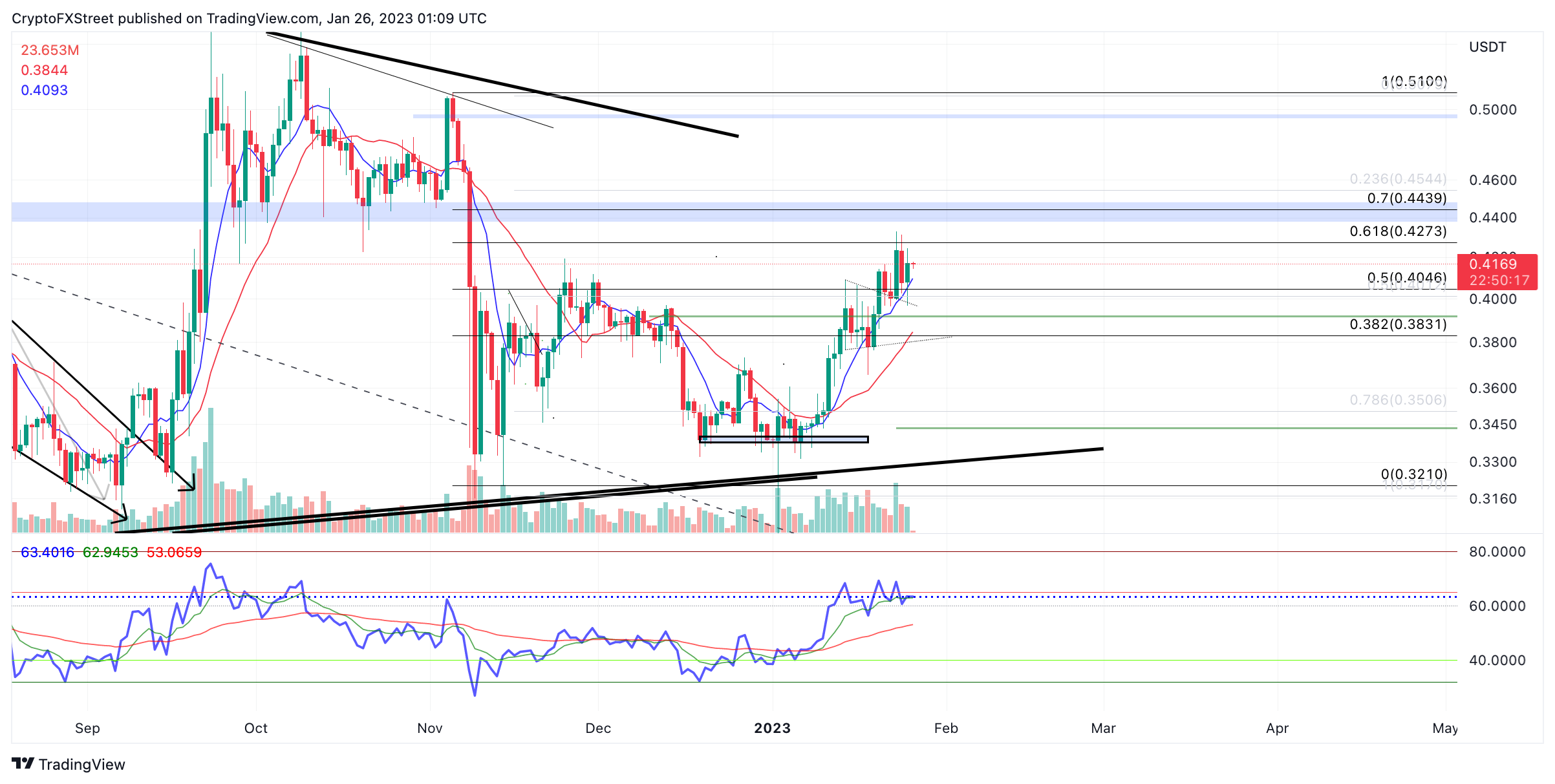 On the contrary, a second attempt at the current daily low at $0.396 could trigger a cascade of selling. Traders should look for support levels to step in near the 21-day simple moving average at $0.381 and $0.375 as a second target. The bears would forge a 15% dip in market value if successful.