Bitcoin price, Ethereum and other cryptocurrencies are currently just off the highs of March and looking solid on positive news and a breakthrough in the peace talks between Russia and Ukraine. But sentiment has shifted during the European session on Wednesday, following data showing inflation in some countries in the eurozone approaching double digits, and this has pulled markets' attention back to the problem of rising price pressures. With EURUSD off the lows, and equity markets tanking, a significant tailwind that was helping cryptocurrencies could be set to fade and even turn into a headwind, as cold water is dampening any further beliefs of a truce or peace deal.

Bitcoin (BTC) price looks heavy as bulls could not maximise the relief rally on Tuesday. Instead, they got rejected twice against the 200-day Simple Moving Average (SMA) around $48,413.27 and even a close above the monthly R1 at $47,851.97 proved to be too much. With morale amongst bulls fading, expect to see more and more profit-taking that will trigger a spiral to the downside.

Thus, BTC price stands to look for support where bulls will need to step in not to let their rally be broken. Seeing the steepness of the move in the past few days, expect to see a decline back to either $45,261.84 or $44,088.73. Two levels that were already marked up in the past have proven they were a challenge to break above, so the current drop in price action would be a good test to see if they hold any support in return now.

As talks continue once again, market expectations are set to increase, and investors will want to see more guarantees than just a headline reading things are going to be fine. Bulls and investors will now probably only be prepared to jump in when a cease-fire is guaranteed and a solid, detailed deal is on the table. That could see the price jumping above $50,000 towards $50,0019.29 as bulls pierce through the 200-day SMA, and $48,760.92 is taken out.

Ethereum (ETH) price was set for a steep trajectory towards $5,000.00, but instead, the past few hours have been proven to be a challenge for them as cold water was poured on global market sentiment. The ASIA PAC session indices tanked over 1% after the Nasdaq closed off yesterday with a similar loss. When one of the current technical supportive elements breaks, expect to see a flight to safe havens with investors pulling their money out of Ethereum price.

ETH price is still supported by $3,391.52, the monthly R1 resistance and the green ascending trend line –  all three very close to one another. Expect to see pressure mounting further throughout the day, resulting in a break to the downside. When ETH price slips below the green ascending trend line, a drop of around 10% will be seen before bulls step in at around $3,018.55 – not only to defend the 3,000.00 psychological level but also to defend morale as a too-large correction would spook investors out of ETH. 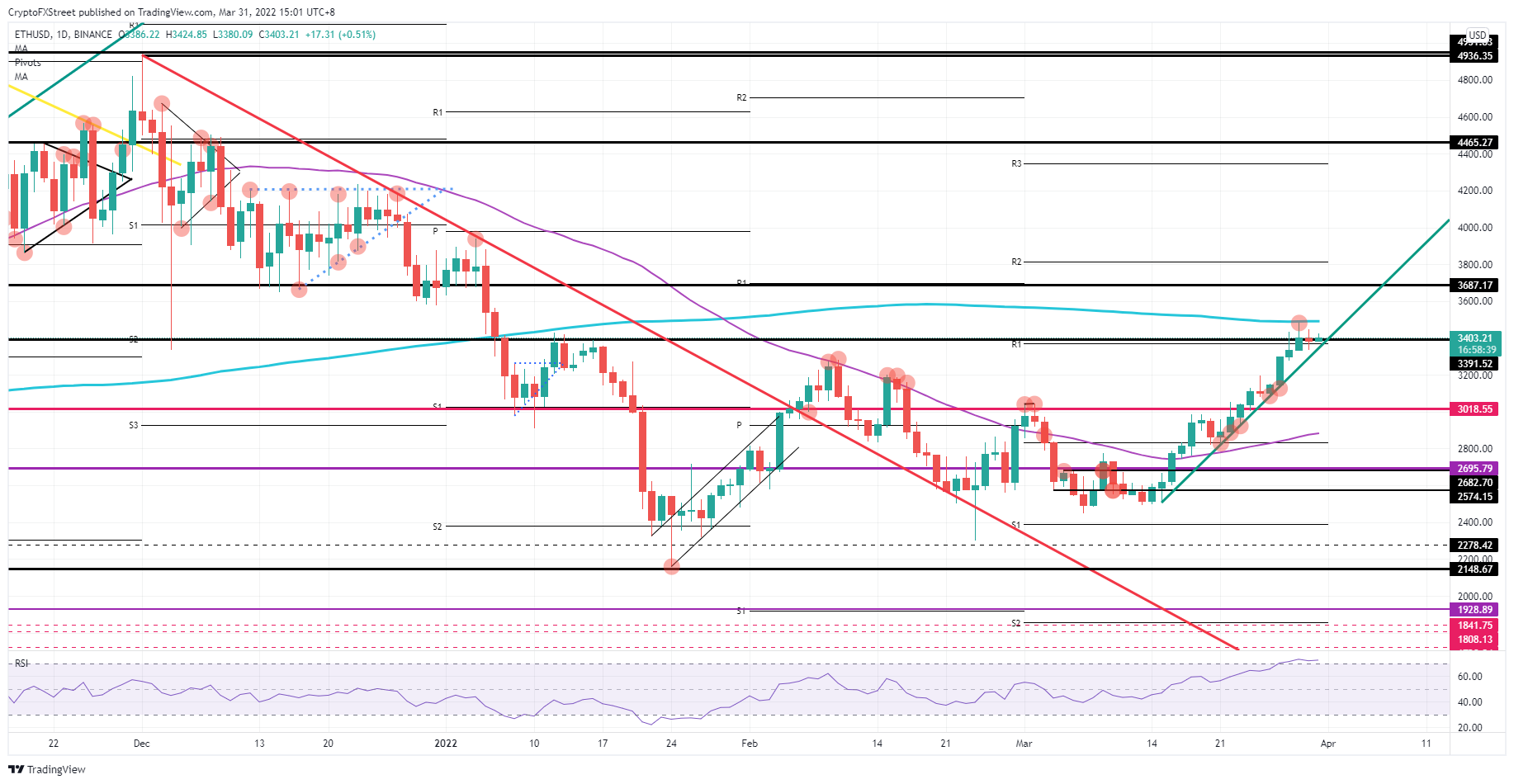 A false break could see bulls rush in more quickly to defend the rally turning it into a bear trap. That would see an influx of more bulls and the price pop to $3,687.17 as the demand on the buy-side enlarges even further. With this move, the room is open for a rally up to $5,000.00 in the coming weeks.

Ripple (XRP) price has bulls popping the champagne corks on Monday as the price pierced through the 200-day SMA above $0.90. That party got underway a bit too early as markets began to doubt if the news on Tuesday was an actual breakthrough, as opposed to a feign by Russia to enable a reshuffle in its military actions. Forty-eight hours later, it looks to be the latter as troops move towards the Donbass and promises to ease up on bombing and shelling have not been kept on the field.

XRP price keeps investors puzzled, which is reflected in the price action, with XRP price hovering between $0.8390 and $0.8791. From there, XRP price could still go either way, but seeing the reaction in the Nasdaq last night, and the drop in the Hang Seng and Topix this morning, expect to see XRP price moving to the downside. That would mean a break below $0.8390 and XRP price shedding value towards $0.7843, as no actual anchor points sit to the downside. 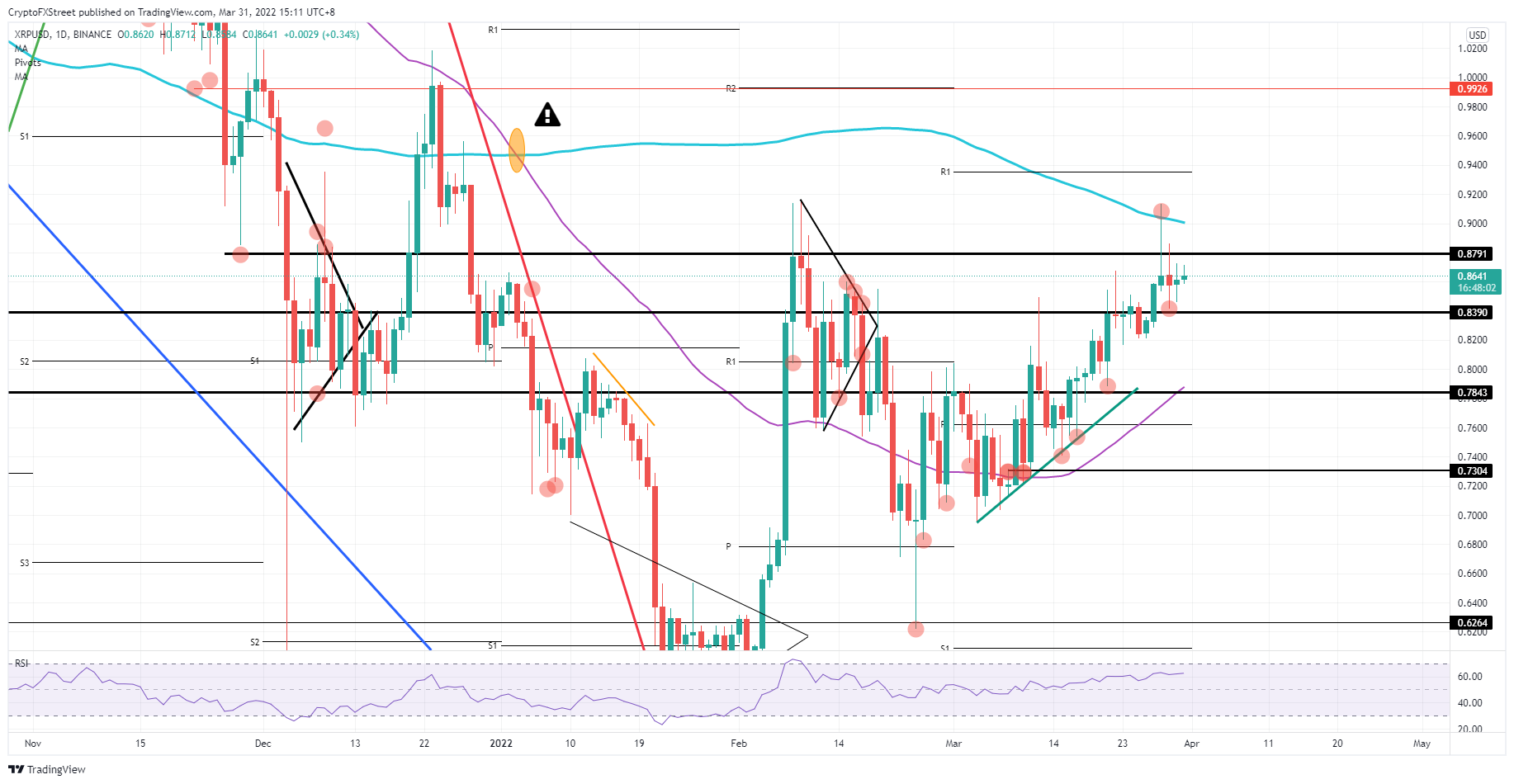 As the price already rebounded once-off $0.8390, a second test could be proven the correct one and see bulls jumping into XRP price, ramping up price towards – and punching through $0.8791. The 200-day SMA is just a few inches away and could be broken to the upside as the dollar looks to be fading for a third straight day. That would see XRP strengthening all the way up towards $1.00.