Bitcoin remains on the hunt for a move above the 200-day average as Luna Foundation Guard (LFG), a non-profit organization focused on UST, resumed buying the largest cryptocurrency after taking a break on Tuesday.

LFG has purchased 5,773 BTC, worth $272 million, this week, the foundation's confirmed bitcoin address showed at 09:42 UTC. Nearly half was purchased on Monday and the rest a few minutes before press time. Last week, it acquired about $125 million of BTC each weekday.

"The foundation had a trading hiatus after Monday's big purchase. It is back today [snapped up 2,943 BTC]," Arcane Research's Vetle Lunde told CoinDesk in a Twitter chat. "Last week, LFG sent $125 million worth of USDT across all weekdays and $160 million on Saturday to Jump Trading, who executed the BTC trades quickly thereafter." USDT is the symbol for tether, the world's largest stablecoin by market value.

LFG announced last month that it had raised $1 billion through an over-the-counter sale of LUNA, the native token of the Terra blockchain, to build a bitcoin-denominated reserve as an additional layer of security for Terra's decentralized dollar-pegged stablecoin UST, the fourth-largest stable coin. The funding round was led by Jump Crypto and Three Arrows Capital.

The foundation increased the size of its bitcoin reserve to $3 billion early this month and has been using tether to purchase BTC. Tether helps users bypass market volatility by maintaining a 1:1 peg with the U.S. dollar.

"The reserve will help maintain a UST peg to the dollar during downward peg deviations," Lunde told CoinDesk in a Telegram chat. The coin has been able to retail the dollar peg by issuing and destroying LUNA tokens. For every UST created, $1 worth of Luna is burned on the Terra blockchain.

LFG has accumulated 30,728 BTC worth $1.45 billion, topping the initial target of $1 billion. The foundation's ether address now has stable coins worth $848 million, which can be used to fund further BTC purchases. It could get an additional $800 million by converting its UST holdings to tether. 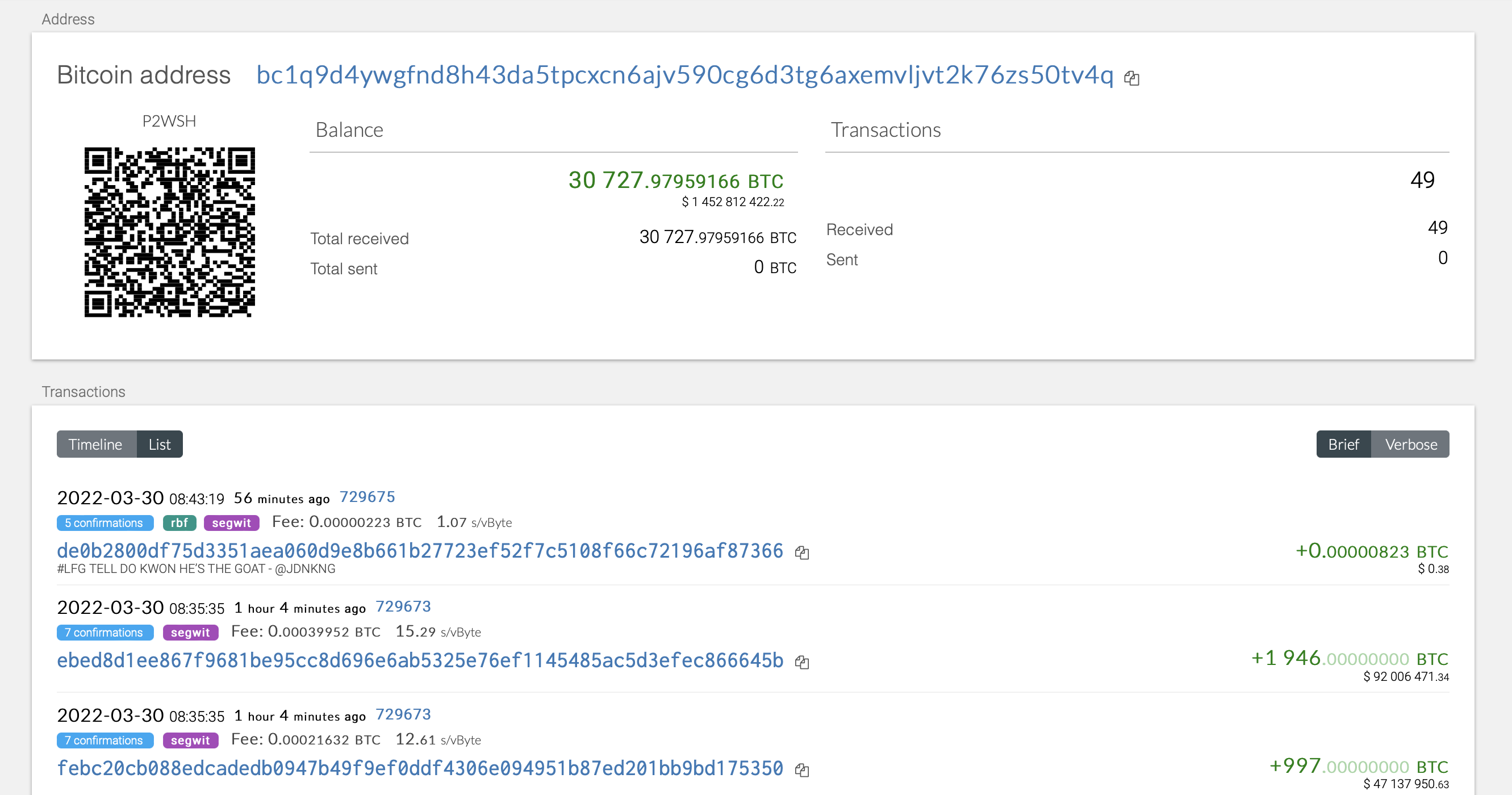 While there is no formula or frequency for executing purchases and no deadline for building the reserve, the process would be completed in the next two weeks if LFG reverted to it previous buying pattern.

"If LFG continues to buy at a similar rate as last week and the $800 million is not converted, LFG will finalize building the BTC reserve on April 6. Assuming a stable BTC price of $47,000 until April 6, LFG will have 48,800 BTC in its reserve once finished," Lunde said in Tuesday's blog post.

"If LFG also spends its $800m UST reserves on BTC, this process will be finalized around April 14, with a further *~17,000 BTC being added to the reserve, leading the reserves to reach 65,000 BTC," Lunde added.

The implication is that, at least for the short-term, the path of least resistance for bitcoin appears to be on the higher side. Terraform Labs founder and CEO Do Kwon recently tweeted that LFG could eventually increase the size of the reserve to $10 billion. 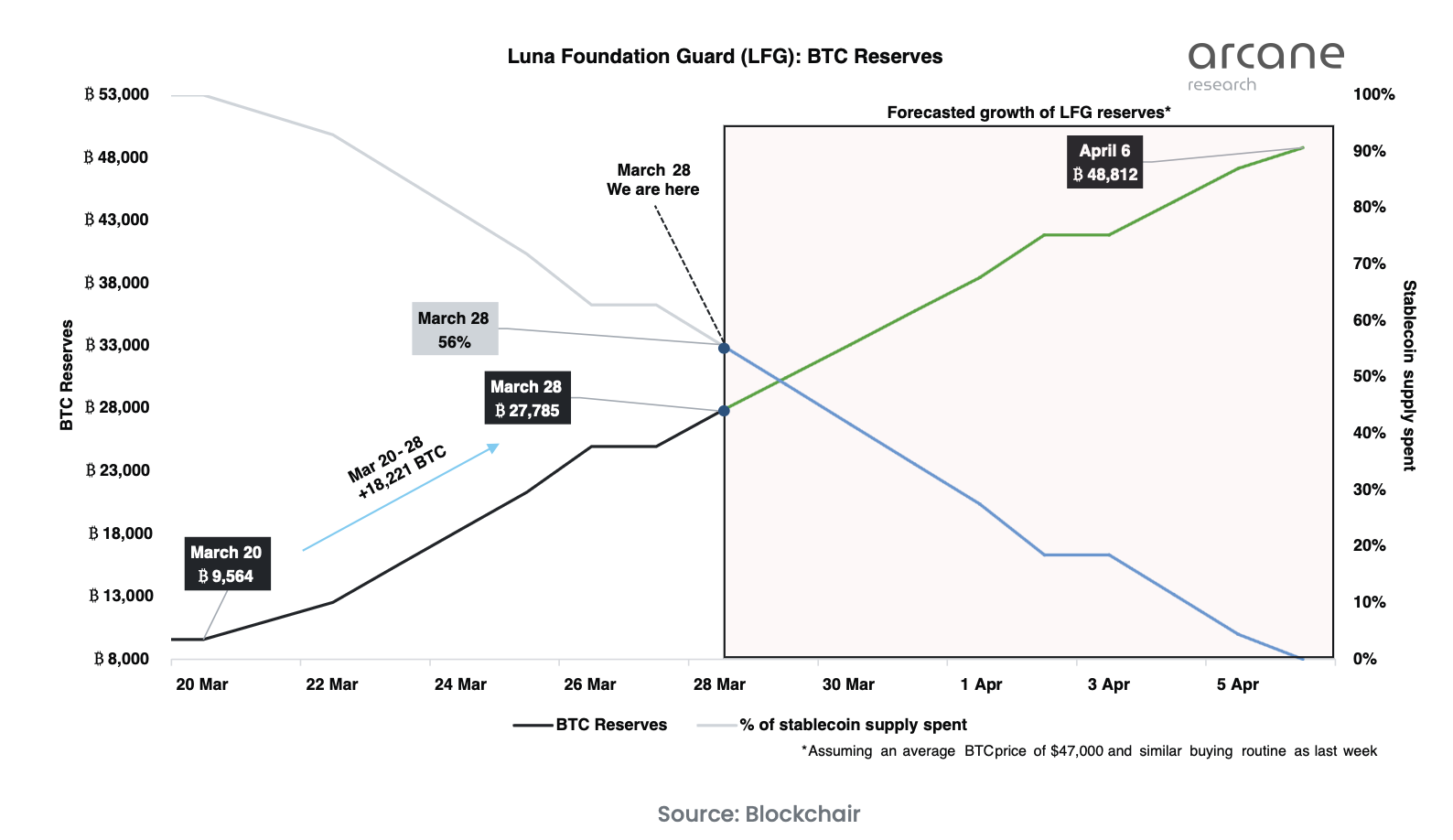 Bitcoin was last trading near $47,500, little changed on the day. The cryptocurrency rose nearly 13.5% last week, the biggest single-week percentage rise since April 2021, data provided by charting platform TradingView show. According to Arcane Research, LFG's purchases probably contributed to lifting the market and the foundation's activity must be closely tracked in coming days.