Shiba Inu’s burn rate has climbed 1,494% – a significant increase over the past 24 hours. Based on data from the portal that tracks Shiba Inu’s burn implementation and statistics, Shibburn, the pace of SHIB token destruction has picked up. Normally a bullish factor, the exponential increase in the burn rate is a reaction to SHIB price’s recent weakness, and holders are hopeful it will have a reversal effect.

Shiba Inu’s burn rate climbed because of this factor

Shibburn website statistics reveal that Shiba Inu’s burn rate has spiked up significantly over the past 24 hours. 45.16 million SHIB were burned over the past day and 147.5 million Shiba Inu tokens were permanently pulled out of circulation through last week.

In the past 24 hours, there have been a total of 45,165,582 $SHIB tokens burned and 6 transactions. Visit https://t.co/t0eRMnhnPL to view the overall total of #SHIB tokens burned, circulating supply, and more. #shibarmy

Shiba Inu sent to a dead wallet address is permanently removed from circulation and considered burnt. There are two addresses that serve the purpose of dead wallets, identified as Burn Address one and two (BA-1 and BA-2) on the Shibburn portal. Several large wallet investors have contributed to the massive burn of the meme coin. 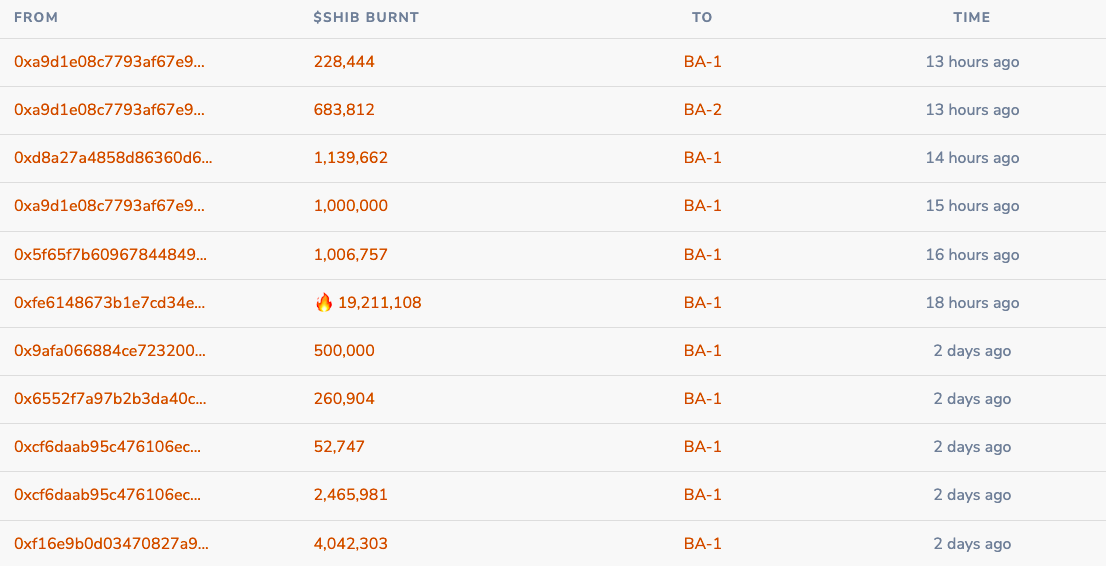 In August 2022 the daily burn was higher than weekly burn in October 2022. Shiba Inu holders used to send one or two billion meme coins on average to “dead” wallets. The burn rate has declined consistently over the past two months so the recent sudden rise must be set against an overall decline in tokens burned.

A whale wallet tracker platform @whale_alert alerted SHIB holders to a new whale who added 3.36 trillion Shiba Inu tokens in a single transaction on October 24. This is the first ever transaction by the whale, and the creation of more large wallet investors in Shiba Inu fuels bullish sentiment among holders.