Shiba Inu price sketched out a cup completion cheat base from May 24 to June 2 with a pivot of $0.00000995, triggering yesterday. It was a short, four-hour burst that has since settled below the pivot. The minor new uptrend and a rising 50 four-hour SMA improve the probabilities that SHIB will reach pertinent price targets moving forward.

From May 19 until May 24, Shiba Inu price formed a symmetrical triangle pattern with two reaction highs and three reaction lows with a measured move target of $0.00001450, representing a 50% gain. During the development of the triangle, SHIB closed with consecutive inside days.

On May 24, Shiba Inu price executed an impulsive breakout from the symmetrical triangle pattern, generating a 30% gain. Still, SHIB failed to capitalize and quickly fell into a downward drift, highlighted by resistance at the 10-day SMA and support at the triangle’s upper trend line.

During the May 28-30 period, Shiba Inu price balanced along the apex level of the symmetrical triangle, registering another inside day on May 30, leading to an eight-hour price burst that was quickly faded.

It has been notable that since the May 21 low, most of the price progress has been contained to four-hour bursts that are partially faded. The SHIB price action has kept investors honest with their trading tactics and forced a heightened level of patience.

Yesterday, Shiba Inu price released from a cup completion cheat pattern with a double-digit gain, but it failed to stick above the pivot. A cup completion cheat occurs when a handle-like consolidation forms in the lower half or even the lower third of an emerging cup. It offers an early entry point, and it is optimal to initiate with a pilot buy. 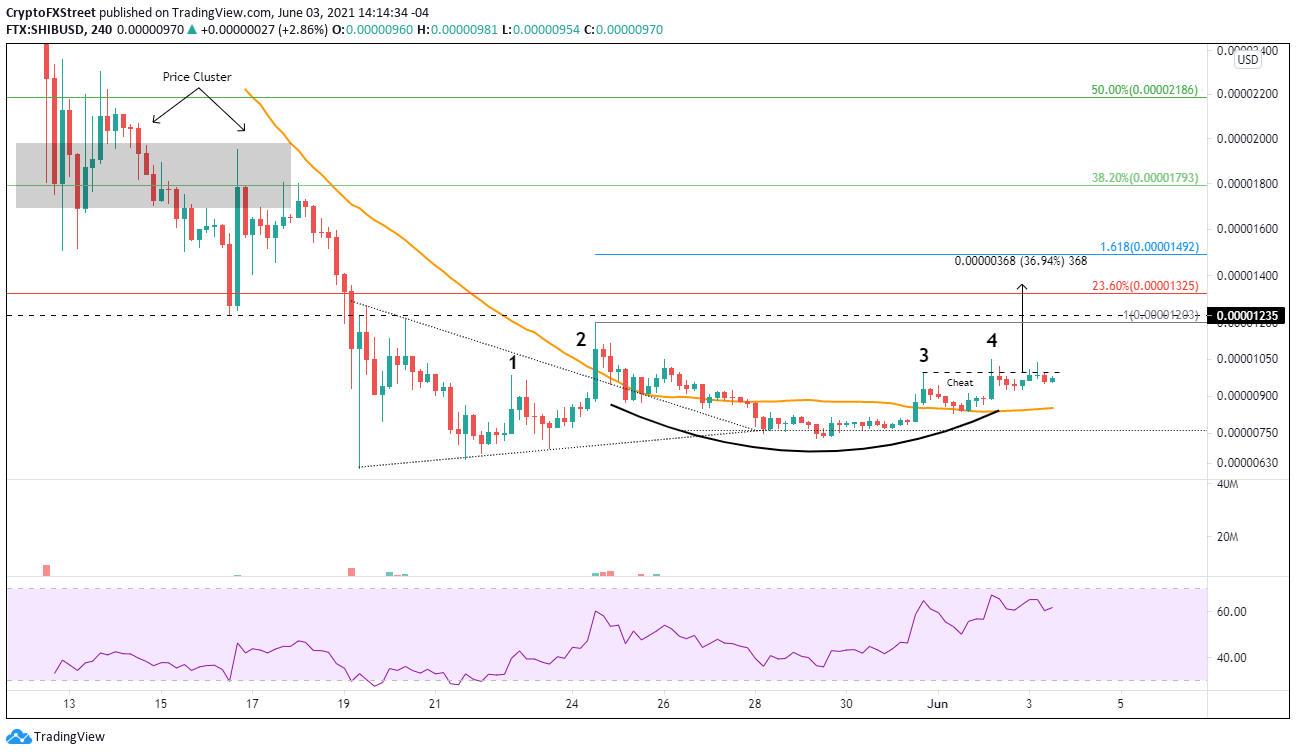 SHIB support begins at the junction of the 50 four-hour SMA at $0.00000851, with the cheat area low at $0.00000830. Any further weakness should raise concern and prompt investors to trim positions or fully liquidate.

If historical precedent holds, SHIB investors should be prepared for short bursts matched with some price fade, thus requiring patience. However, the overall trend should remain tilted upwards for the foreseeable future. As a caveat, no cryptocurrency will escape the force of another heavy sell-off in the complex.

Bitcoin price rally that started on May 30 hit a dead end by June 3, which led to a steady downswing. Investors can expect a leg lower as its most recent attempt to head higher will face a stiff resistance barrier.

Shiba Inu price has slipped into consolidation after its hype subsided in mid-May. Now, SHIB has been stuck in a range of lower highs and slightly higher lows as indecision mounts.

Dogecoin price shows signs of ending its consolidation as it makes headway. The recent swing high created on June 2 is a palpable sign of the evolving uptrend. DOGE needs to breach past a crucial resistance barrier to signal the start of an impulsive wave higher.

In the latest development in the legal battle between the United States Securities & Exchange Commission (SEC) and Ripple Labs, the blockchain firm has filed a motion to compel the government agency to turn over internal documents related to cryptocurrencies, including Bitcoin, Ethereum and XRP.