Shiba Inu, popularly known as "the Dogecoin-killer", witnessed a spike in burn in November. The community destroyed 666 million SHIB in 149 transactions, pulling these tokens out of circulation permanently. The meme coin is ready to begin its recovery despite the crypto bear market.

Also read: Shiba Inu price is on track to appreciate 15% if this happens

Shibburn, a platform that tracks Shiba Inu’s burn statistics, noted that 666,903,322 SHIB tokens were burned in the month of November 2022. The Shiba-Inu-themed token’s community destroyed upwards of 666 million SHIB in 149 transactions.

The implementation of burn is key to Shiba Inu’s ecosystem as it reduces the number of SHIB tokens in circulation. The reduction in the meme coin’s circulating supply has a direct impact on its price.

Upwards of 410.38 trillion SHIB tokens in total have been permanently removed from Shiba Inu’s circulating supply. Considered Dogecoin’s largest competitor, SHIB has witnessed a dramatic decrease in its circulation. 41% of SHIB tokens have been destroyed, and 562.56 trillion are currently being circulated across exchanges and users’ wallets.

The crypto bear market has failed to dampen the recovery of the Shiba-Inu-themed cryptocurrency. SHIB price remained largely unchanged over the past two weeks, and analysts have identified technical indicators that point toward a recovery in the meme coin.

Nancy Allen, a technical analyst at The Coin Republic, argues that Shiba Inu price needs to register a breakout from the falling triangle pattern. Shiba Inu needs to attract more buyers in the intraday trading session to begin its recovery.

The Relative Strength Index (RSI), a momentum indicator, is at 46 and is struggling to break out from neutrality. Allen believes that a strong momentum difference in Shiba Inu, tracked by the Moving Average Convergence Divergence (MACD) indicator could signal a recovery in the meme coin. 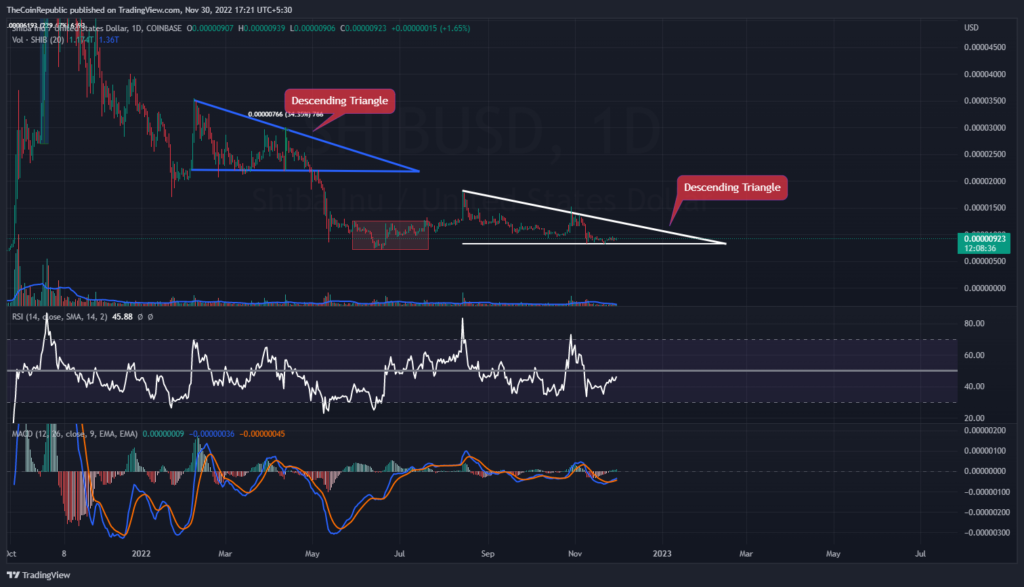