Litecoin price suggests a balance between supply and demand and confirms the bullish view that selling pressure has been exhausted.

A strong price pattern of any type, like a cup-with-handle, “should always have a clear and definite price uptrend prior to the beginning of its base pattern.”

In most cases, the bottom part of the cup should be rounded to scare or wear out the last of the weak holders. The handle should have a downward drift and correct around 15% from its peak. Additionally, it should form in the upper half of the overall base and above the 50-day simple moving average (SMA).

Over the last three days, Litecoin price action has been very constructive. It is holding the 50-day SMA and remains in the upper half of the base. The handle correction is 17%, and the price has declined on lighter volume.

Based on a rough pattern projection, LTC should take another 3-4 days to complete the handle.

Critical to the bullish forecast is Litecoin price holding the confluence of the 50-day SMA and the 50% retracement level, which is around $195.

Once the handle’s high at $230 is surpassed, the immediate target is the high at $247. The next important target is the 1.382 extension level of the entire base pattern at $29, which would represent a 29% gain from the handle high. 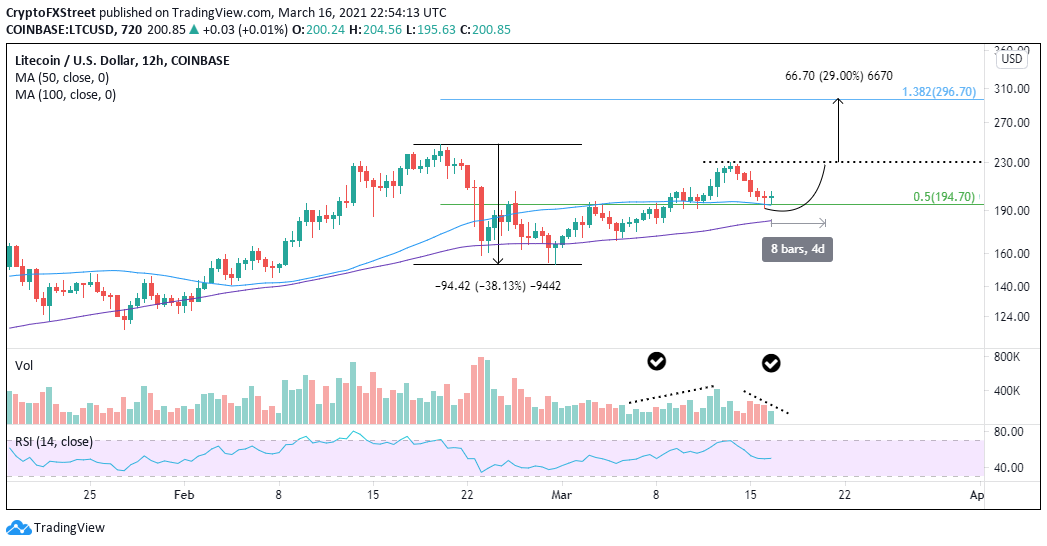 A daily close below $195 would invalidate the bullish outlook and push Litecoin price down to at least the 100-day SMA at $182.32.

Dogecoin price prediction shows reasons to be concerned. Analysts have been eyeing the notorious dog coin throughout the summer as the DOGE price fell into considerably discounted price territory at $0.050. Invalidation of the downtrend will result from a breach above $0.112.

Shiba Inu, the second-largest meme coin, is closer to its breakout according to analysts. While declining trade volume and inflows to SHIB are typical of a bearish trend reversal, analysts remain bullish on SHIB. Analysts have predicted a recovery in Shiba Inu.

Avalanche price grinds to a halt, breaking a two-month trend within an ascending parallel channel. Despite breaking above $30.00, AVAX failed to close the gap to $40.00. Initially, higher support at $28.00 mitigated the bears’ influence on the price.