XRP price flips bullish after tagging its primary support at $0.3600. The buyer congestion in this zone disrupted a potential drop to $0.3179. A glance at the technical outlook reveals that XRP price may close the day above $0.3800, with $0.4200 coming within reach.

Ripple executives shed some light on XRPs in escrow accounts

Ripple executives contributed to a discussion on what the XRP tokens in escrow accounts mean for the crypto project's circulating supply. The XRP enthusiast who started the conversation also sought to understand whether a conflict existed between the two entities – Ripple Labs and XRP.

All Ripple executives were asked to shed some light on the matter, from the CEO Brad Garlinghouse, the Director of Engineering, Nik Bougalis, the CTO David Schwartz, former developer Matt Hamilton to Tiffany Hayden, the self-proclaimed CEO of XRP.

A project’s circulating supply affects supply and demand dynamics. This is not the first price Ripple has been accused of dumping tokens in the market when they sell the tokens in escrow accounts. However, the company maintains that its actions do not negatively impact XRP price.

We had not reached a conclusion when we published this article, but many agreed that a thin line differentiated the XRPs in circulation and the tokens in escrow accounts. Questions were raised about whether Satoshi Nakamoto's Bitcoins are a circulating supply for the largest cryptocurrency.

XRP price teased an 11.73% decline when it formed a descending triangle on the four-hour chart. With the aid of the 200-day Simple Moving Average (SMA), the pattern's x-axis prevented a bearish breakout to $0.3179. 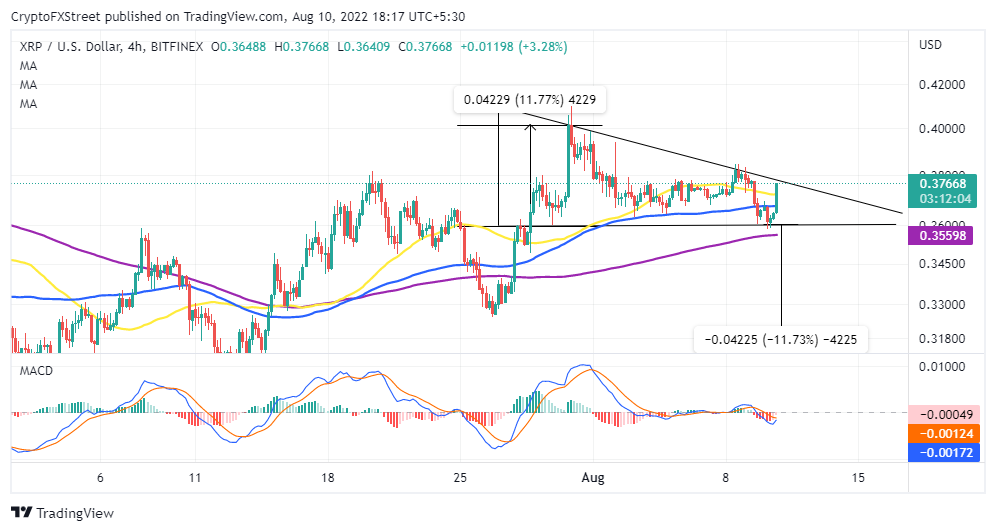 A sharp upswing has already sent XRP price to trade at $0.3772 at the time of writing. It is only a matter of time before the price explodes above the hypotenuse and makes a gigantic move to $0.4200.

The Moving Average Convergence Divergence (MACD) on the same four-hour chart reinforces the bullish reversal. Traders should watch for another buy signal as the 12-day Exponential Moving Average (EMA) exceeds the 26-day EMA.

Conversely, traders should not ignore whales holding over 10 million tokens. According to Santiment, addresses in this cohort plunged to 327 from 347 in three months. The decline was gradual, implying that XRP is yet to build confidence among large volume holders. For this reason, traders should consider booking profits at $0.4000, although the most bullish may wish to hold on till $0.4200.