Ethereum’s bullish momentum has been unstoppable since the cryptocurrency gained over 80% in the past month. However, since corrections do occur in bull markets, ETH has slumped by over 8% in the past 12 hours after reaching an all-time high at $4,221.

According to on-chain data from Santiment, the amount of ETH mentions on social media made an all-time high of over 3,600 in a five-minute interval frequency in early May. Ether reached ‘peak hype’ on May 3, indicating that the crowd was feeling euphoric about the Ethereum price action.

Despite the optimism among investors, extreme spikes in social volume could indicate overvalued market conditions, coinciding with short-term price consolidation.

Ethereum’s Network Profit/Loss (NPL) witnessed a major substantial increase on May 9, showing that an extensive number of addresses were in profit. The massive hike in NPL could foreshadow that investors were to realize ETH gains, benefiting from the immense bull rally that has continued for weeks.

Taking a look at Ethereum price on the daily chart, it seems to be forming an ascending parallel channel. This type of technical formation can be drawn adjacent to the existing channel to determine a potential bullish target, which puts ETH price at $4,677.

The recent downswing pushed Ethereum price to lows of $3,660. Although it has now regained strength to trade above $3,900, it must close above this crucial support level. Failing to do so could see ETH dive to the next support level at $3,572. 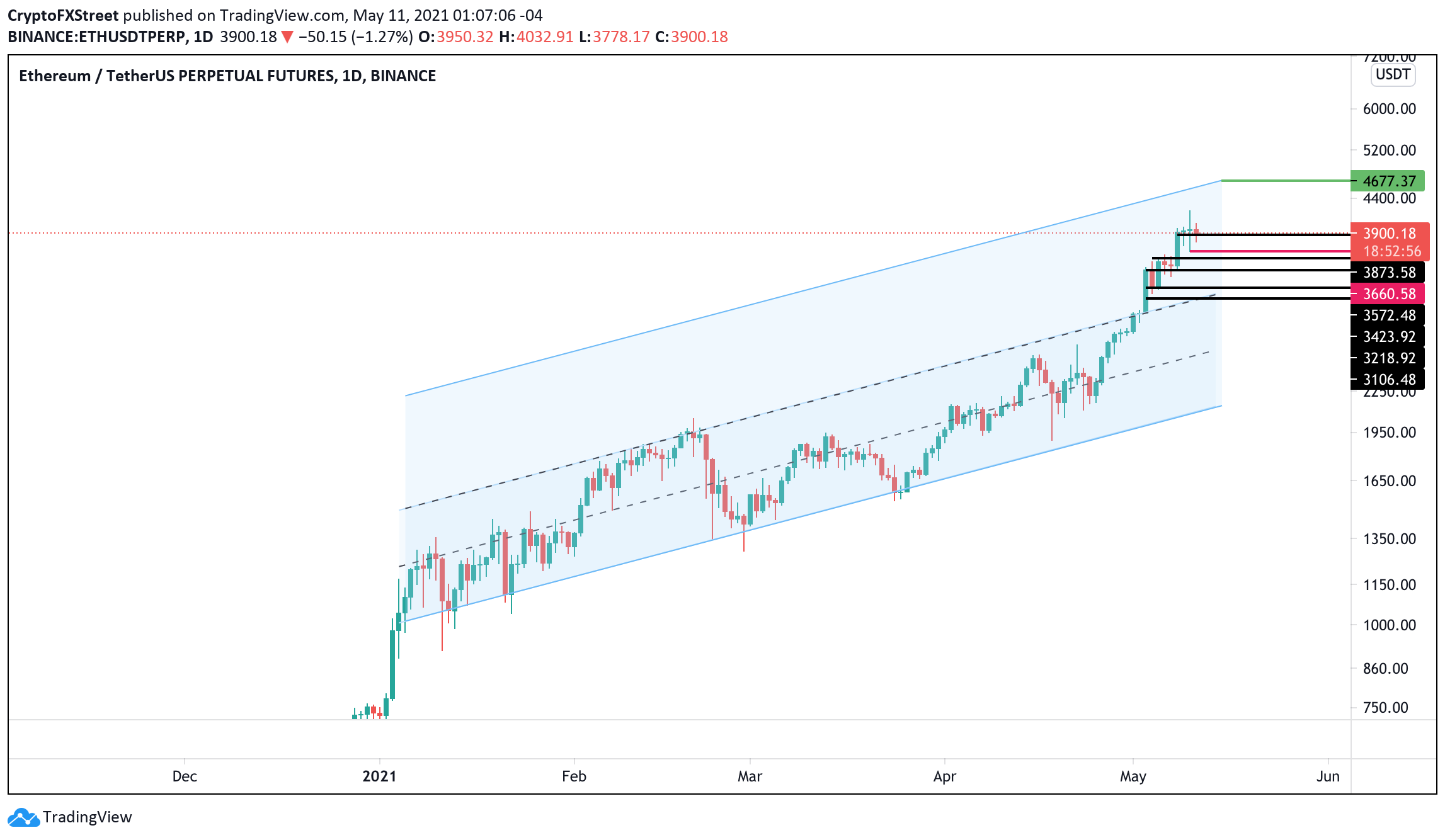 IntoTheBlock’s In/Out of the Money Around Price (IOMAP) model shows that the most significant support level that could keep falling prices at bay sits between $3,764 to $3,879, where over 278,000 addresses bought 7 million ETH.

On the flipside, the IOMAP cohorts reveal that Ethereum price might face resistance ahead at $3,947, where 319,000 addresses had previously purchased 1.5 million ETH.

Whales are in the driver’s seat

Ethereum transactions worth over $100,000 have also shot up during the past week, indicating an elevated activity by large ETH investors. Major spikes in whale transfers counts could suggest a local top for Ethereum price.

Institutional investors have started to take profit over the past week as Ethereum made new all-time highs. According to a report by CoinShares, fund providers have seen outflows that suggest continued profit-taking behavior.

It is worth noting that the report also indicates that Ethereum adoption has steadily risen. ETH-related investment products have seen a new record of $16.5 billion assets under management (AUM) after an inflow of $60 million last week.

Bitcoin-based financial products only reached this threshold in AUM in December 2020, indicating that institutional investors are slowly embracing Ethereum.

XRP price has started its pullback after a bounce of 50% from its swing low. The case filed by the SEC against Ripple Labs sees no signs of settlement as the lawsuit takes a turn. The cross-border remittance token is sealed in a tight range in between significant areas of support and resistance.