Ethereum price is coiling up after tagging a crucial psychological level. Investors can expect ETH to shoot higher as the overall outlook of the cryptocurrency market remains optimistic. In a highly bullish case, the smart contract token will likely set up a new all-time high.

From shifting the algorithm to Proof-of-Stake (PoS) via the recently introduced London hard fork to having multiple solutions to its scalability issues, Ethereum has come a long way. Arbitrum, a layer-two scaling solution from Offchain Labs, recently announced that it had secured funding worth $120 million in a Series B round.

This raise was led by Lightspeed Venture Partners and others like Pantera Capital, Alameda Research, billionaire Mark Cuban and Polychain capital.

Offchain Labs built its platform in response to an increasing need for scaling Ethereum without compromising on the security of Ethereum as the base layer.

More importantly, Arbitrum has EVM compatibility, allowing developers and projects to deploy without changing the code in their contracts.

On a similar note, Polygon adoption is pushing to new heights with the recent integration of Dharma, which is inadvertently helping ETH scale.

While layer-two solutions are becoming more efficient, Ethereum’s shift to proof-of-stake and the London hard fork are active efforts to further improve the scalability of the ETH blockchain without compromising its security and decentralization.

The recent protocol upgrade and the significant strides that the Ethereum Foundation is making aim to improve the scalability of the entire blockchain by retaining its security and decentralization. Although this is a bullish development in the long run, it will take ETH a while to feel the effects of deflation.

While it will take time, ETH is already retesting, hovering below the $4,000 level in attempts to breach it. So far, roughly $834 million worth of ETH has been burnt. As this process continues, Ethereum price will face a supply shock, pushing Ethereum price higher.

Although the smart contract token comes close to the $4,000 psychological level, retail investors show no real interest as gas prices hover around 102 GWEI.

Ethereum price broke out of its month-long consolidation above the $3,000 level on August 31. Since this breakout, ETH has rallied nearly 25% and is currently restarting another phase of congestion.

As this sideways movement consolidates, volatility and buying pressure continue to increase. Investors can expect a sudden burst in bullish momentum that pushes Ethereum price to $4,071. A decisive close above this resistance level will open the path for a retest of the all-time high at $4,372.

If the bullish momentum persists, market participants can expect ETH to set up a new all-time high at $4,700. In some extreme cases, ETH might also tag the $5,000 psychological level. 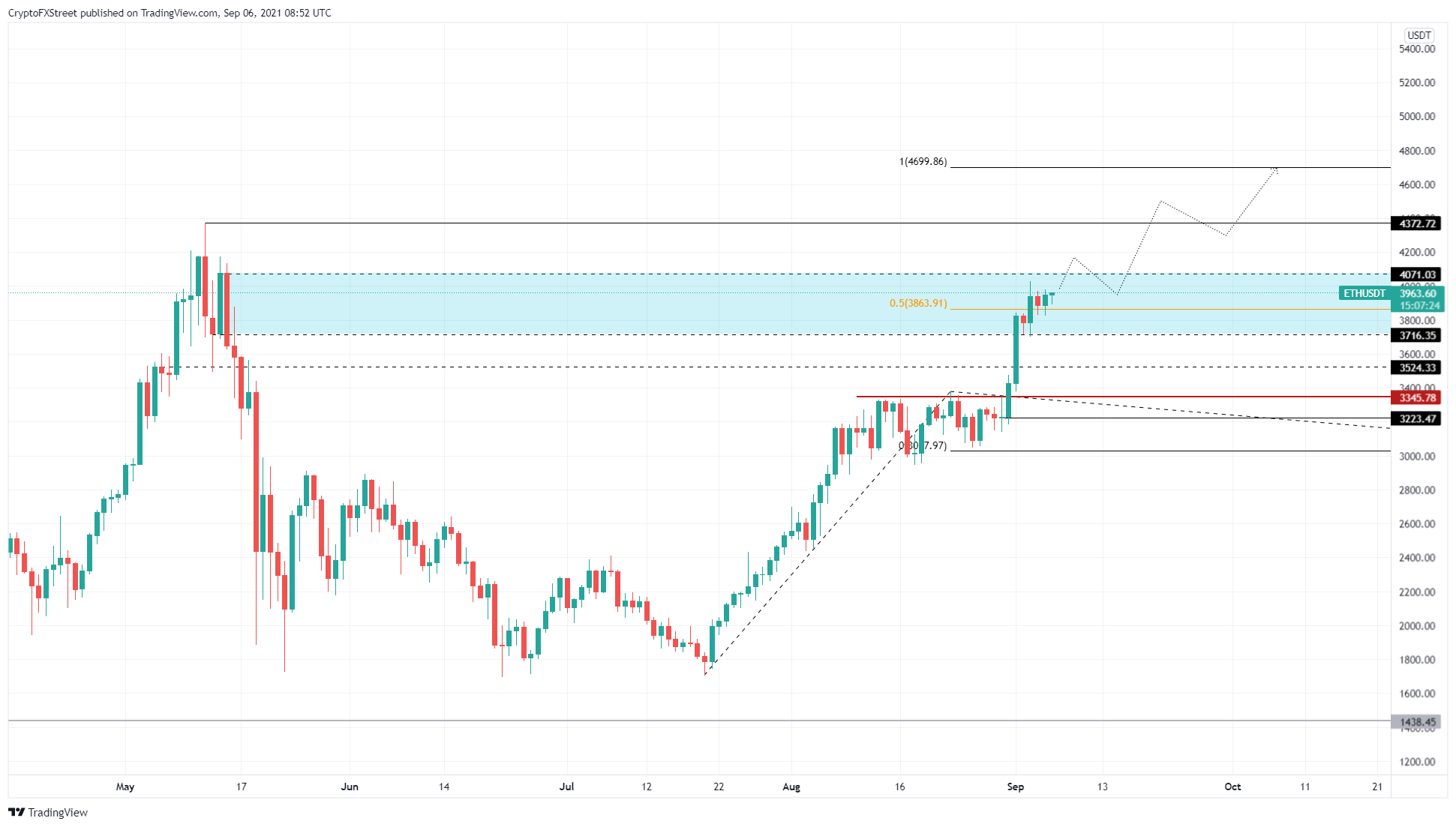 Supporting this ascent and a new all-time high is IntoTheBlock’s Global In/Out of the Money (GIOM) model, which shows little to no resistance present in ETH’s way.

Additionally, the supply on exchanges has been on a drastic decline over the past two weeks. From August 23 to September 5, roughly 2.35% of ETH has left centralized exchange wallets, signaling a bullish outlook.

Interestingly, despite the recent uptick in price, the ETH funding rate is hovering around 0.07%. A high funding rate is often the sign of an overleveraged market, which could exacerbate potential sell-offs.

The current funding rates suggest that the retail investors are taking it slow, which is a sign of a healthy uptrend and does not forecast any sudden crashes.

Things are looking optimistic for Ethereum price and show no signs of slowing down. A decisive close above $4,372 will undoubtedly open a resistance-free path for ETH and propel it higher.

On the other hand, even a 15% correction to $3,345 would not put ETH in harm’s way. Still, a lower low below $3,223 will plant the seeds of doubt and probably scare off weak investors.

If the selling pressure pushes Ethereum to shatter the August 26 swing low at $3,027, it will invalidate the bullish thesis. In such a case, market participants can expect Ether to explore lower territory.