ETH 2.0 is drawing near as Ethereum developers have recently confirmed that the next update will occur in less than a month. The blockchain’s transition to proof-of-stake inches closer with a major upgrade scheduled for late October.

Ethereum is taking its next step toward becoming a proof-of-stake (PoS) blockchain. ETH 2.0 aims to fulfill its original vision of the network to become an efficient, global-scale and general-purpose transaction platform while retaining crypto-economic security and decentralization.

The first mainnet upgrade to the Beacon Chain, Altair, has been scheduled to take place at epoch 74240 on October 27. The Beacon Chain has been built in parallel to serve the core of the upgraded consensus, while the original proof-of-work chain continues to run.

The upgrade will bring light-client support for the core consensus, as well as stepping up the “punitive parameters” to ensure that the blockchain is economically secure.

Ethereum developers stated that for PoS blockchains to be economically secure, penalties are required to incentivize validator liveness as well as provide security in the event of tail-risk scenarios.

The proposed penalties are “inactivity leak” and “slashing” under the Ethereum Improvement Protocol (EIP) 2982.

New updates on the Altair release are expected to be revealed on October 4.

Ethereum price continues to recover from the market-wide crash that brought many cryptocurrencies lower following China’s reiteration of banning digital assets in the country.

The second-largest cryptocurrency by market capitalization reached a low of $2,650 on September 21. However, ETH has managed to create higher lows, and an ascending triangle pattern has emerged on the 4-hour chart.

Given that the pattern is only just starting to form, investors should wait for a confirmation before entering the market. The governing technical pattern suggests that if Ethereum manages to tag the upper trend line of the triangle, then ETH would be expecting a 16% bounce.

Before the bulls can aim for the optimistic target, Ethereum would need to slice above the 20 four-hour and 50 four-hour Simple Moving Averages (SMA) at $2,958 and $2,973, respectively. Further resistance may emerge at the 50% Fibonacci retracement level at $3,037. 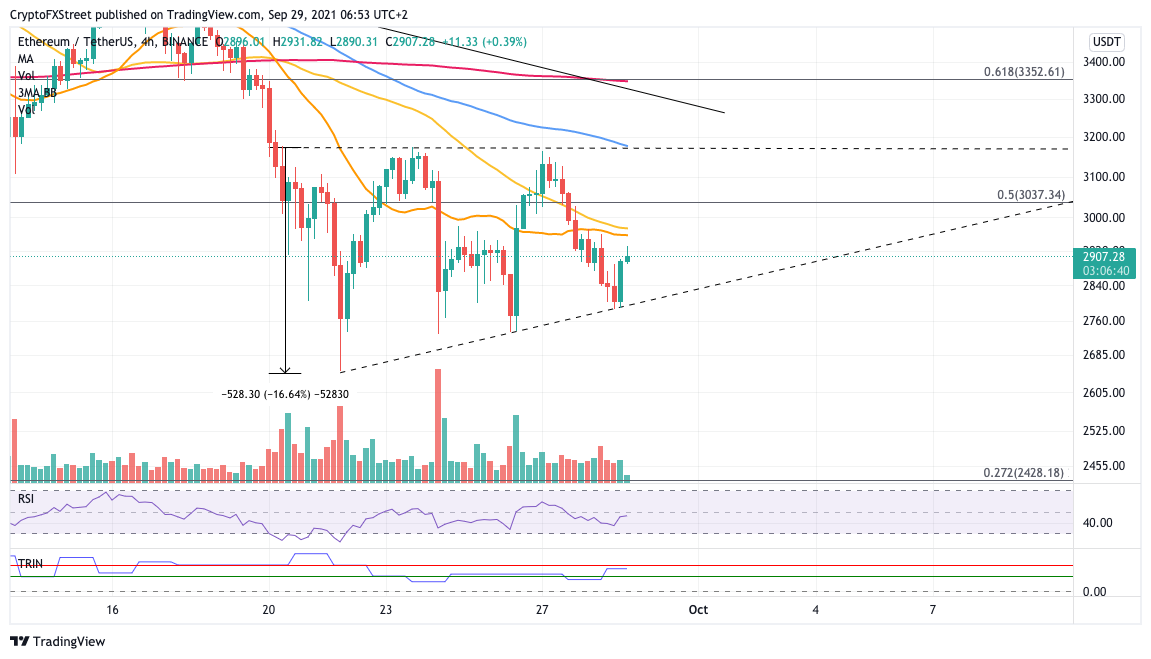 The last hurdle for Ethereum price following the aforementioned resistances is at the upper trend line of the chart pattern, which coincides with the 100 four-hour SMA at $3,172. Only a break above this level could open up the possibility of a 16% climb for ETH toward $3,700 in the longer term.