Dogecoin price is presenting a buying opportunity as DOGE explores the reliability of key support at the lower boundary of the governing technical pattern. If a credible foothold develops at $0.133, a bounce toward the upside may be in the offing.

Dogecoin price could slide lower before a bounce

Dogecoin price has formed a parallel channel on the daily chart as DOGE continues to consolidate and confuse forecasts. The canine-themed token is likely to continue to move sideways between clearly defined technical levels.

Dogecoin price may continue to be sealed within the prevailing chart pattern, between the upper and lower boundaries.

While selling pressure has increased, as indicated by the Arms Index (TRIN), DOGE may fall further to tag the lower boundary of the governing technical pattern at $0.133, which should act as reliable support for Dogecoin price.

Dogecoin price will meet another challenge at the middle boundary of the prevailing chart pattern at $0.209, where the 100-day SMA and 38.2% Fibonacci retracement level intersect. 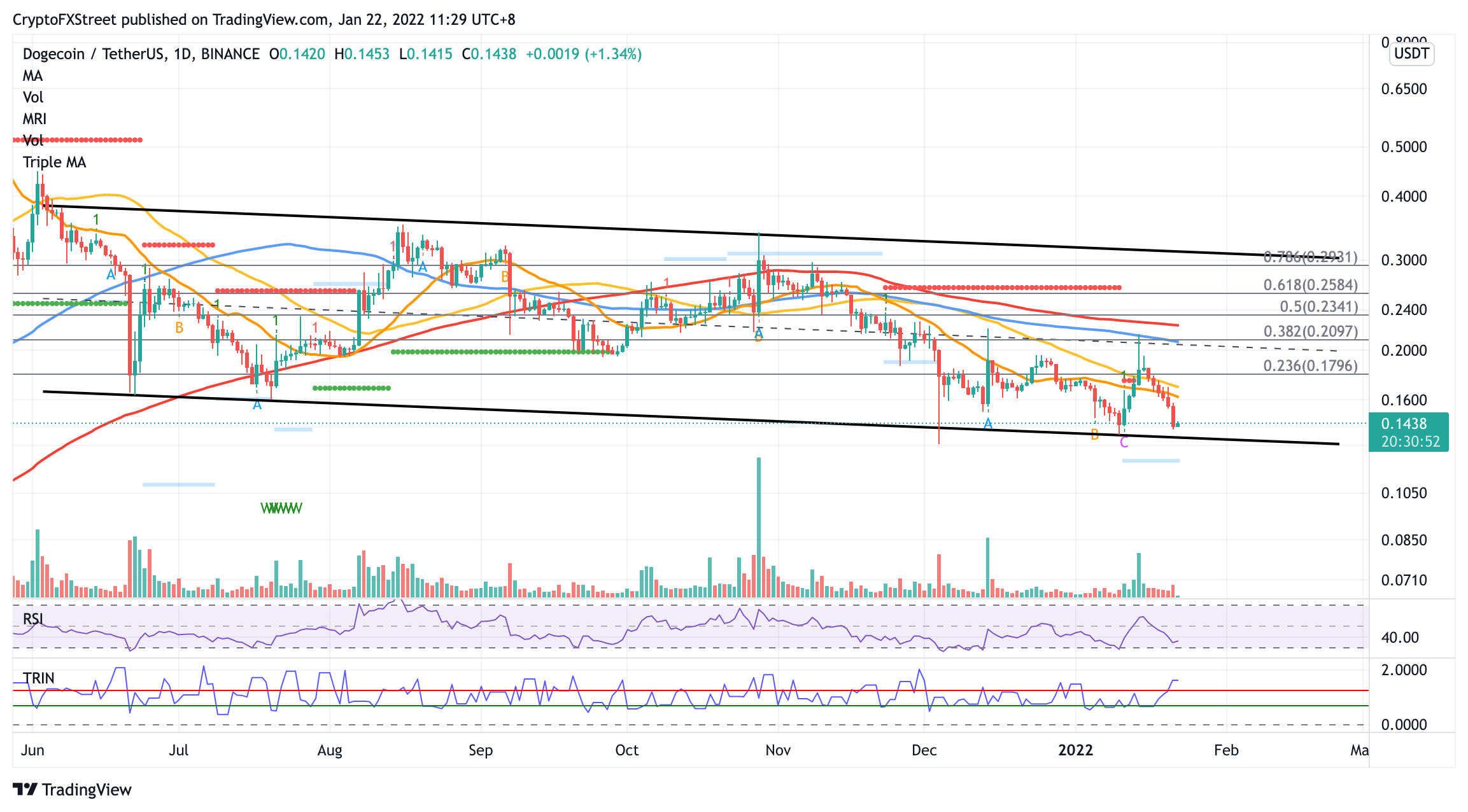 Dogecoin price may be confronted with a stiff obstacle at the 61.8% Fibonacci retracement level at $0.258, coinciding with the resistance line given by the Momentum Reversal Indicator (MRI).

Bigger aspirations will target the upper boundary of the prevailing chart pattern at $0.305, which would result in a 100% bounce.

However, if the bulls fail to reverse the period of sluggish performance, Dogecoin price may fall further toward the December 4 low at $0.130.

Cardano participants seem to be split in half, with only sellers and bears present in the market, while bulls and investors remain on the sideline. The biggest reasons for this are the political rhetoric on Russia that is ramping up again this morning after statements that NATO and the US would send in more military material and troops. Financial markets, meanwhile, are awaiting the outcome of the FED monetary policy meeting Wednesday. These two tail risks keep price action muted or further to the downside, with investors sidelined. ADA this morning is drilling down on the monthly S1 support level and the historical $1.01 level that goes back to March 05. Once this breaks, expect not much support to be present until $0.69 where the monthly S2 support level kicks in at around $0.75, but the most significant historical level is at $0.69 from February 06. Expect buyers to come in there as that would mean that ADA price action is back at 0% on a Year-To-Date (YTD) performance.Read more