Dogecoin price finally broke free of a complex, rounding consolidation on June 18, providing the catalyst for DOGE to fall 50% over five days at today’s low. The ongoing, successful rebound from the 200-day SMA is a constructive development, but it struggles to reclaim the May 19 low of $0.195 on an intra-day basis. Unless the meme token can close above the May low, investors should remain on the sidelines.

Dogecoin price gambles with support, searching for a conclusive end to the selling

Dogecoin price suggested many potential patterns since the May 19 crash, but none resolved until June 18 when DOGE released from the complex, rounding consolidation. The multiple days of price contraction launched a significant price expansion, smashing the May 19 low at $0.195 and pushing the altcoin down to the strategically important 200-day SMA at $0.150. It represented a 50% decline from the pattern resolution and an 80% plunge from the all-time high of $0.760.

A daily close above $0.195 may permit Dogecoin price to commence a meaningful rebound to the intersection of the 23.6% Fibonacci retracement of the May-June collapse at $0.297 with the rounding consolidation support level, offering a 50% gain for active DOGE market operators. The May 23 low of $0.246 may offer temporary resistance during the bounce.

More significant DOGE returns will be a challenge, but if Dogecoin price can unlock from the $0.297 price level, it will not find formidable resistance until the confluence of the 38.2% retracement at $0.389 with the 50-day SMA at $0.390. 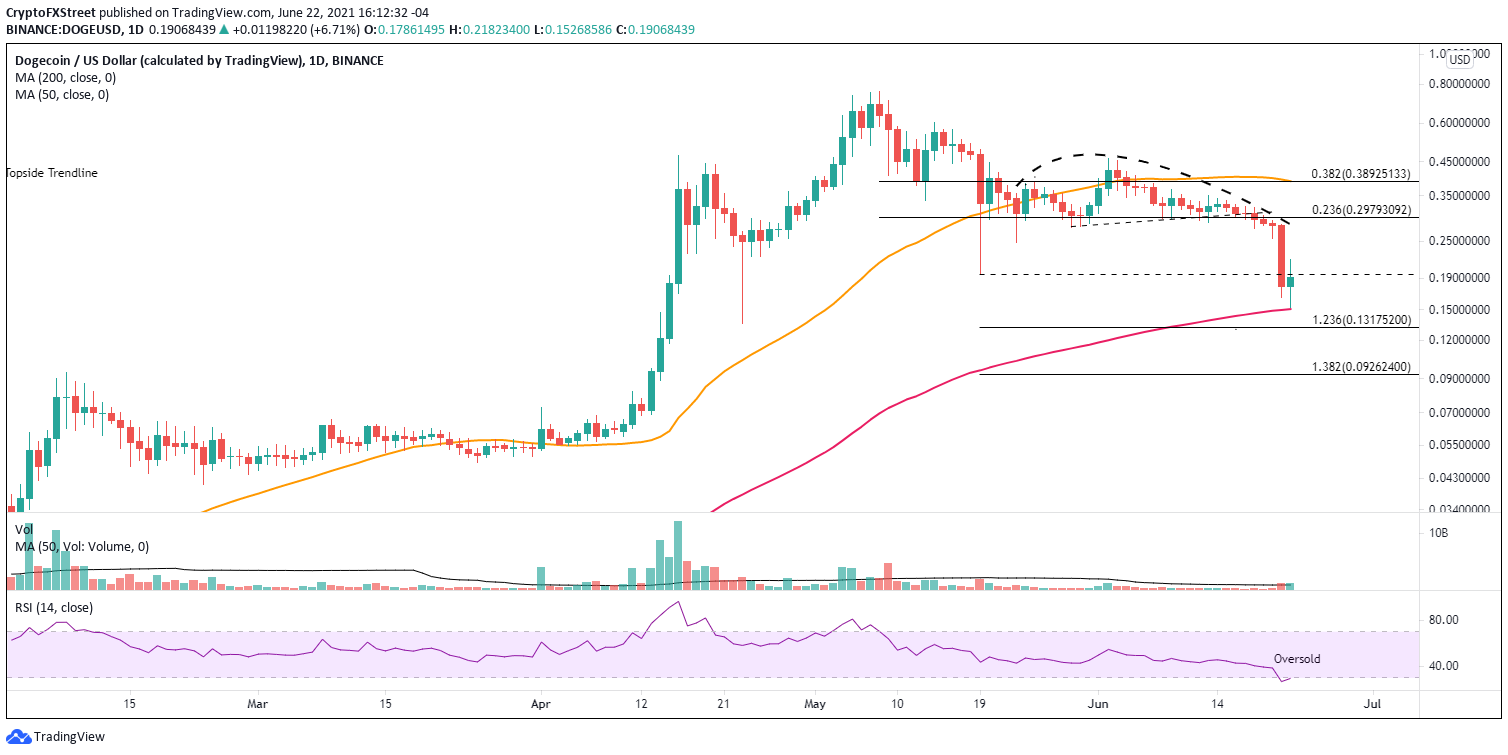 At the time of writing, Dogecoin price has only achieved a mild bounce from the 200-day SMA, but the real test will be a close above $0.195. Until DOGE can achieve that short-term milestone, it is imperative to consider the remaining downside potential for this leg lower.

A daily close below the 200-day SMA leaves Dogecoin price vulnerable for a quick test of the 123.6% extension of the May-June bounce at $0.131. Further selling could leave DOGE at the 138.2% extension at $0.092, yielding a decline of almost 50% from the current price.

DOGE has been at the center of tremendous hype, thanks to social media and Reddit influencers. However, the most committed investors probably don’t realize that Dogecoin price has fallen 80% from the May high. A humbling outcome for an altcoin that was on the cusp of reaching $1.00 only two months ago.

Still, the collapse below the May 19 low and potential recovery today may be the ultimate bear trap, clearing the remaining catastrophic voices stalking DOGE.