Dogecoin and Shiba Inu see their prices suddenly capitulate, after yielding double-digit profits to holders over the weekend. The fall appears to be linked to mass profit taking ahead of the recent dip.

Also read: What is Dogechain, the secret sauce behind Dogecoin’s 15% price rally?

Dogecoin and Shiba Inu prices declined after hitting a local top over the last weekend. Dogecoin price posted 13% losses and Shiba Inu 12% overnight. DOGE hit its local top at $0.087 over the weekend.

Whales accumulated Dogecoin and Shiba Inu through the decline in the two cryptocurrencies through July 2022 and the first week of August. Whale activity on the Shiba Inu network hit a peak on August 15 and this coincided with a top in SHIB price.

Based on data from crypto intelligence platform Santiment, Dogecoin and Shiba Inu experienced major price corrections after Sunday and Tuesday’s peak in their price.

Large wallet investors foreshadowed the ideal profit taking moments in the two cryptocurrencies. A spike in large value transactions, greater than $100,000 coincided with a decline in DOGE and SHIB prices. 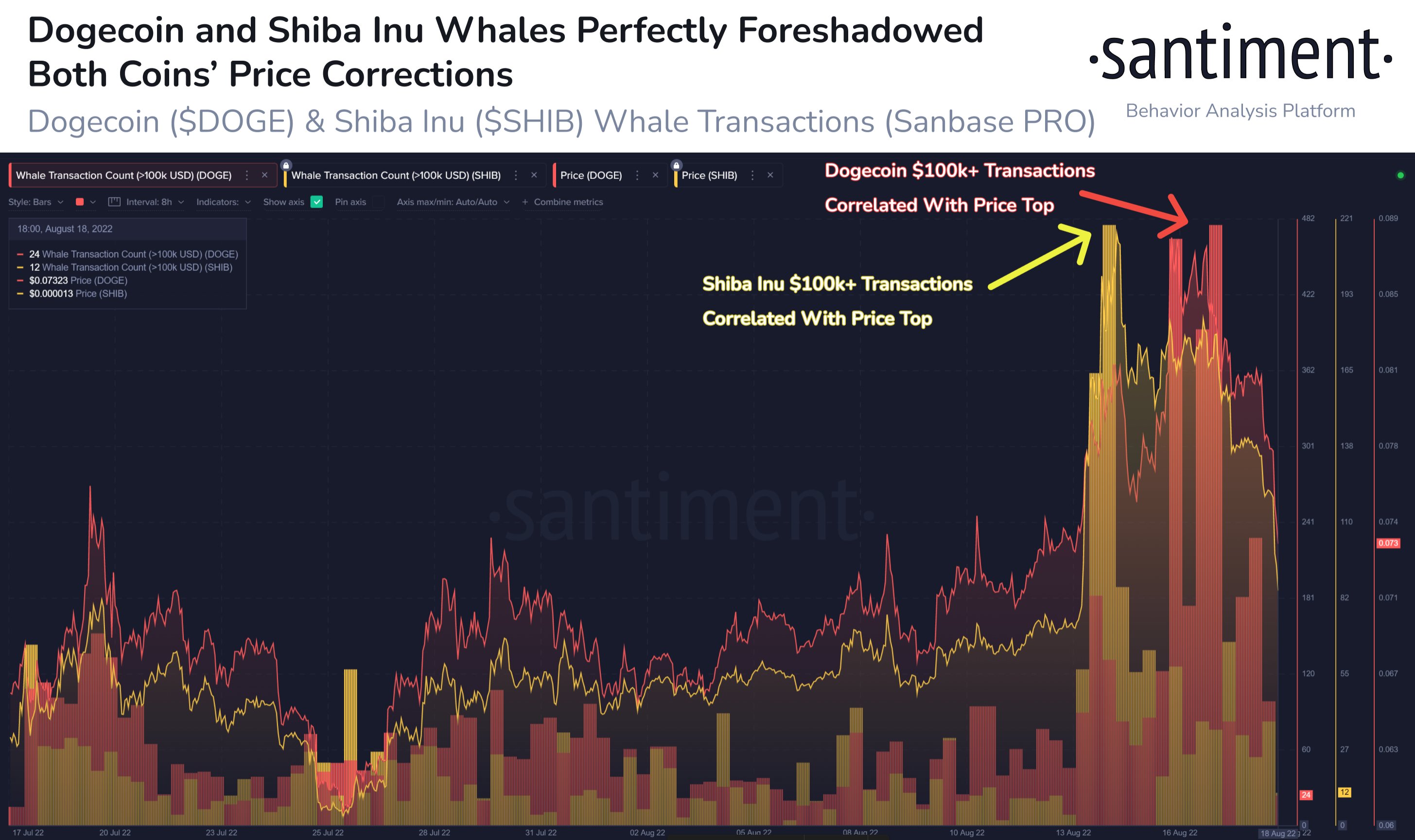 Similarly, the Shiba Eternity launch acted as one of the triggers for Shiba Inu’s price rally. Accumulation by Ethereum whales and large wallet investors is considered another factor causing Shiba Inu and Dogecoin price rallies. Yet, after yielding nearly 30% gains over the past week, by August 15, both assets are bleeding, with double-digit declines overnight.

After hitting a three month high, Dogecoin price started a downtrend and DOGE price has plummeted to the $0.07 level. Analysts at FXStreet identified the specific conditions that need to be met for Dogecoin price to flip bullish.

Dogecoin price will flip bullish on the following conditions

FXStreet analysts have evaluated Dogecoin’s more than a year-long declining trend line. Despite the overall bear trend, DOGE price is likely to climb 6-14% if it breaks out of its downtrend. For specific price targets check the video below: