Coinbase is set to list on the Nasdaq in the middle of this week. It is one of many significant events of 2021 that is helping establish cryptocurrency as a legitimate financial asset.

Besides the boost to cryptocurrency legitimacy, the best thing about Coinbase listing is that it should help act as a gateway for investors to dip their toes in cool white rapids of the crypto river. Similar to a CMD, investing in Coinbase will give investors hands-off exposure to crypto and allow them to avoid dealing with any of that seemingly complicated digital wallet nonsense. In my opinion, the applications that help you store crypto are actually really very simple to get your head around. Still, I can appreciate that it may not seem that way for the uninitiated.

I am of the opinion that crypto will not go mainstream until people can hand custodianship over to someone else. Now, I know this goes against the tenet of decentralisation, but essentially, people do not want that responsibility of looking after nor the consequences of mismanaging their holdings. The Coinbase public listing is at least tangentially related to this concern and can act as a bridging step for many future would-be investors, institutional and retail included.

Coinbase will start trading on the Nasdaq this coming Wednesday under the ticker COIN. Its listing is anticipated to be one of the biggest IPOs for the exchange. The Company's value is inherently linked to the price of cryptocurrency, and as we all know, the crypto market has outperformed almost every other asset class in the past 12 months (except maybe New Zealand housing).

Despite the crypto market's infamous volatility, the buzz surrounding the impending IPO was heightened last week as the Company reported its revenue and profit over the past year. How do you like this: In 2021 Q1, Coinbase reported a provisional profit of ~US$765 million from US$1.8 billion in revenue. However, it would be unreasonable to hold these figures in too high esteem considering the Company's outstanding performance is due mainly to variables outside its control. Even so, the possible valuations of the Company mentioned so far are equalling that of Facebook Inc (NASDAQ:FB) when it first launched in 2012, which is in the ballpark of US$100 billion. 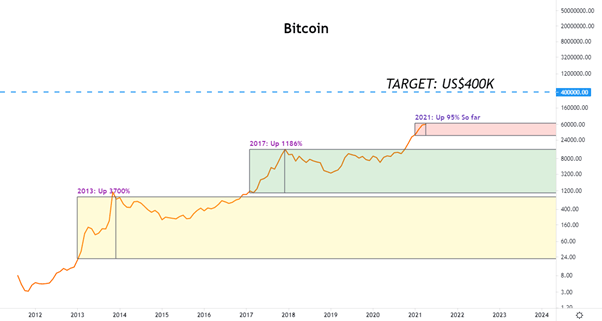 A Coinbase valuation comparison to Facebook while looking forward is just as interesting. In the nine years since it listed in the Nasdaq, Facebook has increased its market cap to US$890 billion. For Coinbase to hit a similar valuation, a miraculous increase in digital assets' price would have to occur. Supporting this conjecture, Mike McGlone, an analyst at Bloomberg, suggests that Bitcoin might trend similarly to its price movement in 2013 and 2017. If so, we could witness Bitcoin hitting US$400K in 2021, and with it, a miraculous boon for the price of Coinbase stock.

Ethereum price has had a stellar performance over the past two weeks, breaking records. Now, ETH bulls might take a break as this indicator flashed a sell signal.

Ethereum Classic price shows a correction that indicates exhaustion of bullish momentum. The retracement could eye a reversal at areas of interest mentioned above.