Currently, the CME offers a variety of cryptocurrency derivative products, including 20 Micro products. Earlier this year, in May, the exchange launched Micro Bitcoin futures, which witnessed 100,000 Micro BTC futures traded during the first six days after launch.

The CME Group launched Ether futures in February, and the firm has already seen steady growth in liquidity in the contracts, especially among institutional traders.

Tim McCourt, the exchange’s global head of equity index and alternative investment products, added that a micro-sized contract could make the market even more accessible for a broader range of participants.

The new contract will be cash-settled, based on the CME CF Ether-Dollar Reference Rate.

Shortly after the CME announced its latest Micro futures product to be launched on December 6, pending regulatory review, Ethereum price rallied to a new all-time high above $4,600.

Ethereum price continues to trend higher on bullish momentum, creating another new all-time high at $4,641. On the 4-hour chart, ETH has reached the topside trend line of the ascending parallel channel pattern, suggesting that if buying pressure rises, it could be awaiting a 16% climb.

If Ethereum price manages to slice above the upper boundary of the prevailing chart pattern, its next bullish target is at $5,368, a 16% ascent.

Given the governing technical pattern, Ethereum price may continue to print new all-time highs even if it fails to break above the aforementioned resistance trend line of the chart pattern, as long as it stays within the ascending parallel channel. 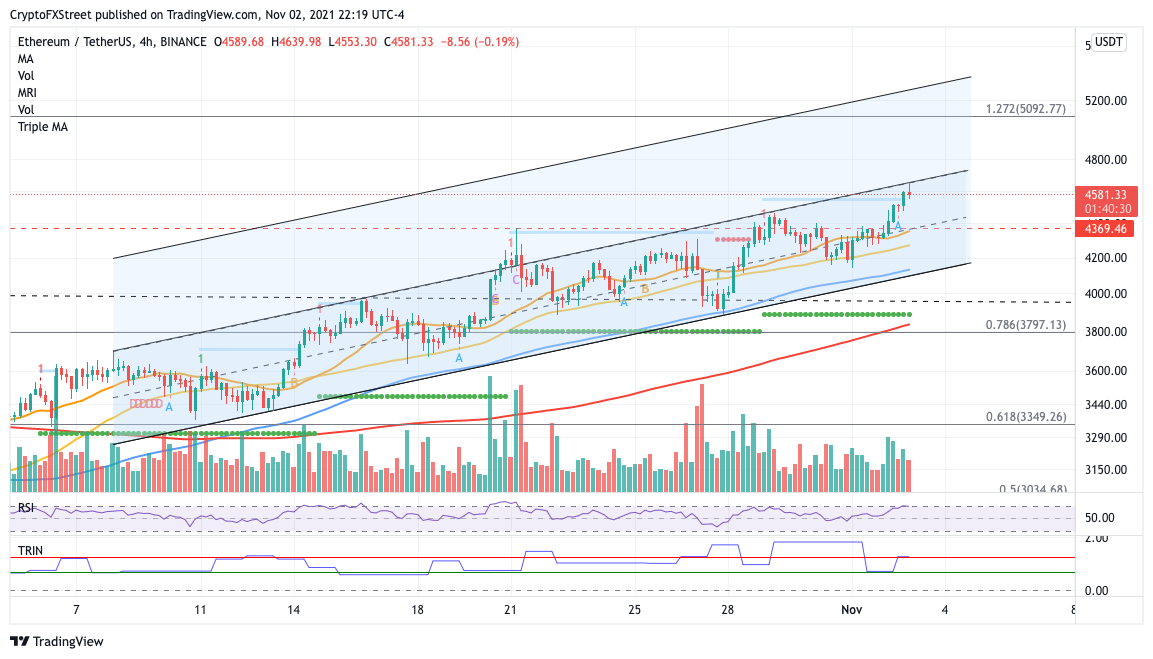 The first line of defense for Ethereum price is at the middle boundary of the channel at $4,369, coinciding with the October 21 high and the 21 four-hour Simple Moving Average (SMA). This level should act as substantial support for ETH, but further selling pressure may see the token drop toward the 50 four-hour SMA at $4,272, then toward the 100 four-hour SMA at $4,140.