Bitcoin price dipped below a crucial psychological level on the first day of November, but the recovery seems to be going well. While a short-term bounce to collect liquidity seems plausible, the mid-term outlook for the big crypto and crypto markets seems to be hedged on a downswing that will help form a base for the upcoming rally.

Bitcoin price has been consolidating between $63,757 and $60,000 for ten days. While BTC spent two days below the psychological level, its recovery seems to be going well. This short-term bounce seems to be aiming for the ‘buy stop’ liquidity resting above the double top at $63,757 formed on October 22 and October 25.

A wick above this barrier will be more than enough to collect liquidity, but for the correction thesis to play out, BTC needs to produce a decisive daily close below $66,000. If successful, this move would be a perfect run-up that sets the stage for a 13% correction into the liquidity zone, ranging from $52,956 to $56,004.

While this is bearish in the short-term, it would provide the market makers and the sidelined buyers an opportunity to fuel up their longs and head for a new all-time high. The 161.8% Fibonacci extension level at $77,525 would be the next target for bulls. 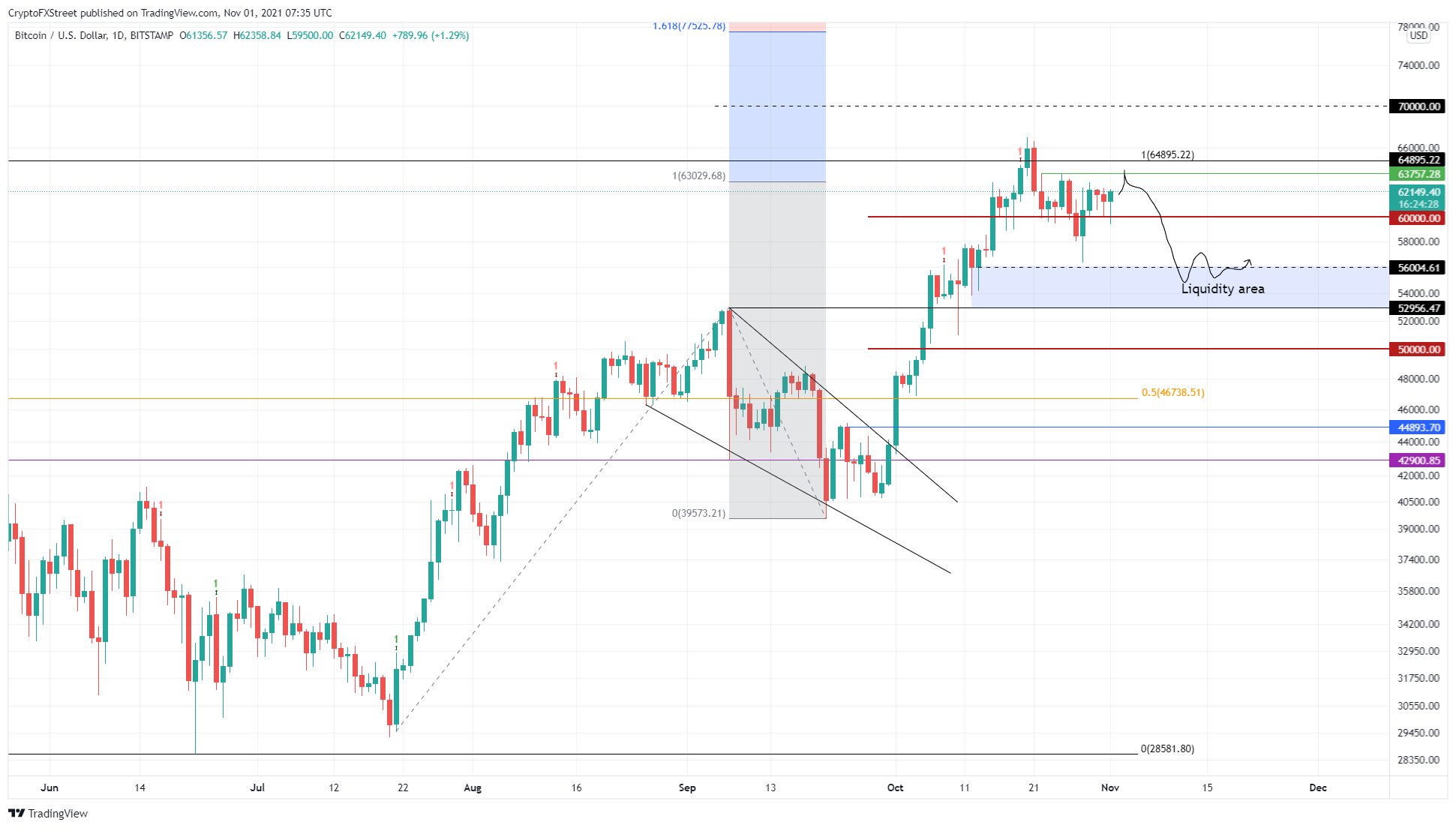 On the other hand, if Bitcoin price pushes to produce a daily close above $66,000, it would indicate that the market makers are preemptively pushing BTC higher. This move would invalidate the short-term bearish thesis but would also indicate that the big crypto will make a run for the all-time high at $67,016.

Ethereum price has rallied 60% from September 30 and set up three higher highs and four higher lows in this period. Connecting these swing points using trend lines reveals the formation of an ascending parallel channel.

ETH broke out of this consolidation on October 29, it managed to get back inside the setup and create a new all-time high at $4,467. However, the recent breakout seems to be struggling and is likely to retrace to the four-hour demand zone, ranging from $3,905 to $4,027.

A close below $3,905 will signal a move toward $3,639, just above the 50% Fibonacci retracement level and eventually to the 62% Fibonacci level at $3,332. This move would also allow market makers to collect liquidity, hoping for a move higher. 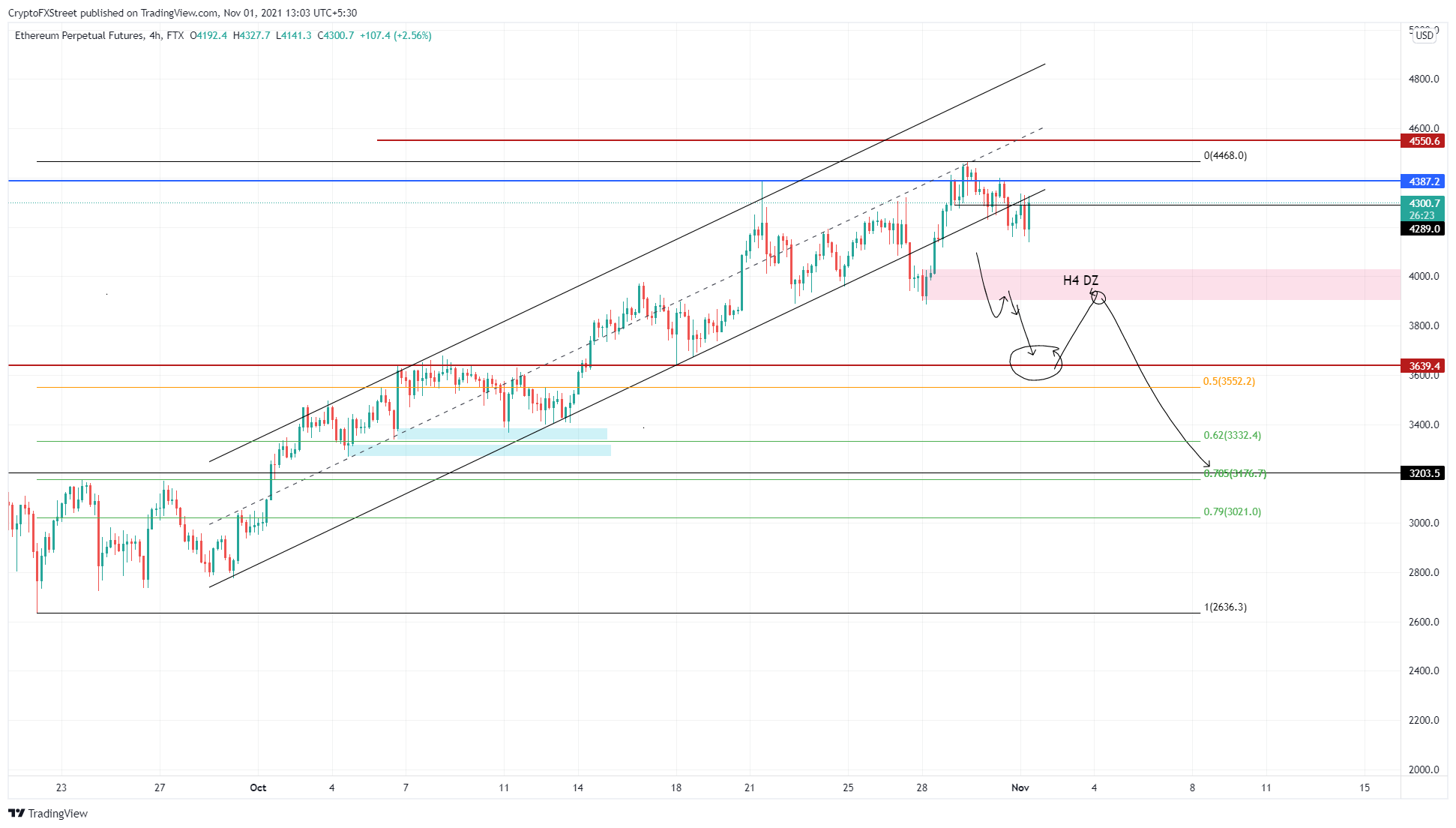 While things are looking down for Ethereum price in the shorter time frame, this downswing will arid ETH holders of selling pressure and propel the altcoin higher. However, if ETH preemptively produces a higher high above $4,468, it will invalidate the bearish thesis.

After five attempts, Ripple price has failed to breach the $1.13 to $1.23 supply zone and is currently looking to ready for a pullback. However, the downswing will meet several support levels at $1.05, $1 and the 50% Fibonacci retracement level at $0.96. From a market makers’ perspective, the most pain for traders would occur if the XRP price heads below $0.85.

Therefore, investors can expect Ripple to slice through the 62% Fibonacci retracement level at $0.85 and retest the next barrier at $0.77. This downswing would constitute a 30% descent from the current position. 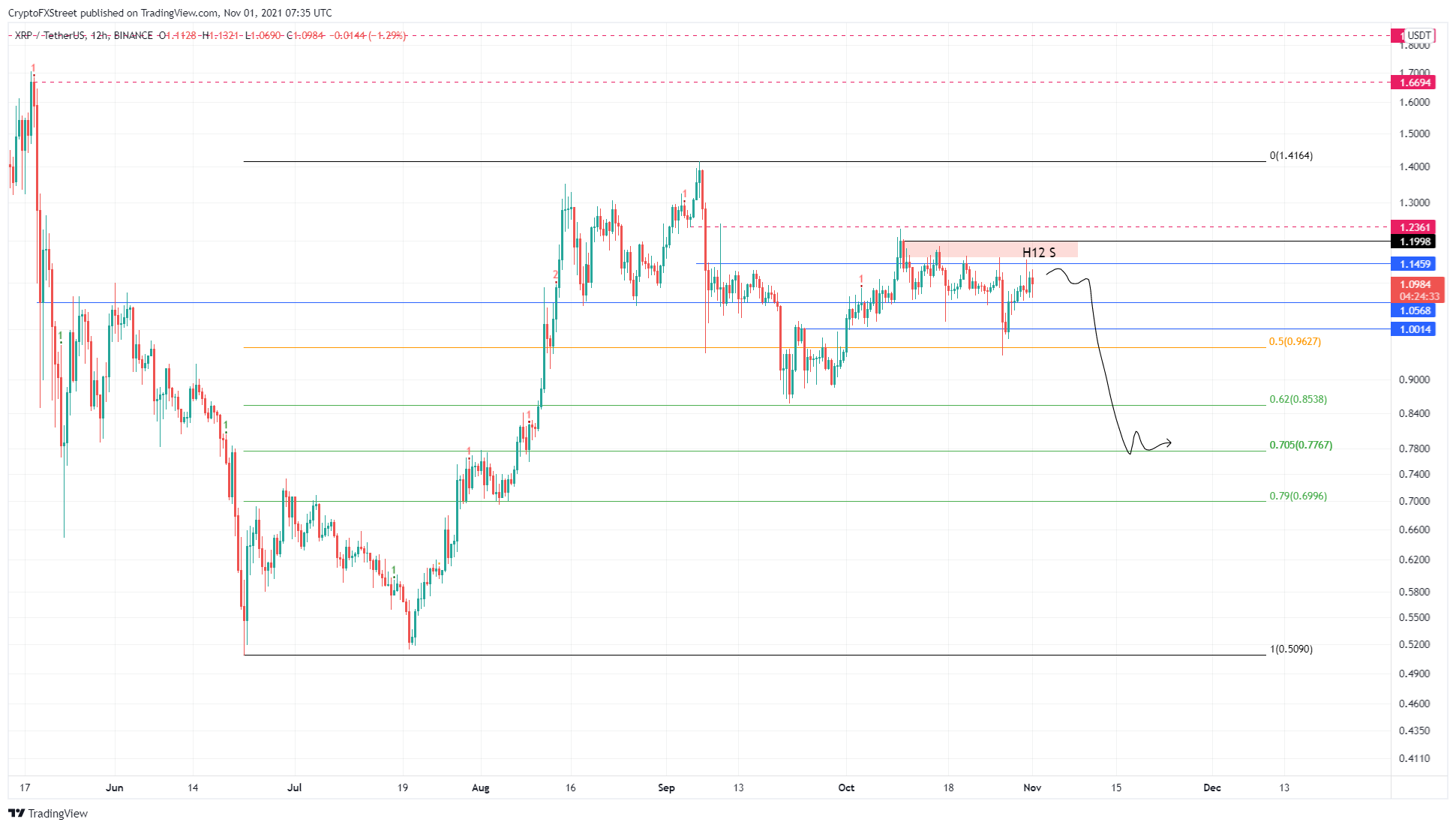 If Bitcoin price suffers a pullback, XRP price will likely follow suit. However, since BTC could make a run at $63,000 before heading lower, investors can expect Ripple price to retest the $1.13 to $1.23 supply zone.

A decisive daily close above $1.13 will invalidate the bullish thesis and mark the start of an uptrend. In such a case, the remittance token will make a run at the range high at $1.41.