Despite ongoing bullish dominance, some coins from the top 10 list remain in the red zone. 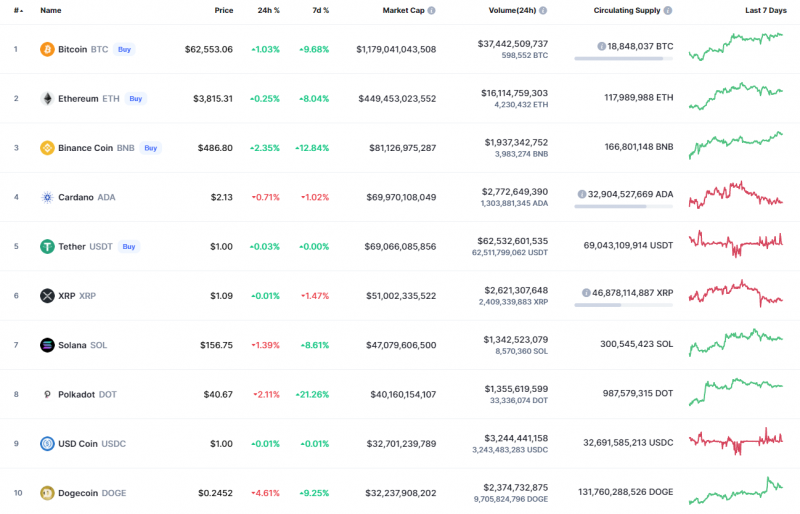 Yesterday, buyers tried to refresh the high of last week, but during the day, the price of Bitcoin (BTC) failed to rise above $62,680.

In the evening, Bitstamp experienced a significant storm. In the afternoon, the lowest BTC price of $59,013 was recorded there. On other exchanges, the pair only slightly pierced the psychological support of $60,000.

Today, buyers might try to break through to the $64,895 level, which passes through the historical high of the Bitcoin price. If bears derail this attempt, then the price may dip to the support of $58,000.

Cardano (ADA) could not follow the rise of other coins and its rate has gone down by 0.86% since yesterday.

Cardano (ADA) has fixed below the moving average, which means that bears have seized the mid-term initiative. Currently, one needs to pay close attention to the level of $1.899. If sellers break it, one should expect a sharp drop to the zone of the most liquidity around $1.482.

SHIB is the biggest gainer from the list today as the meme coin has risen 3%.

Despite the rise, SHIB remains trading in a wide channel between the support at 2,010 and 3,528 satoshis. The trading volume remains low, which means that traders are accumulating their power for a further sharp move. In terms of the nearest price projection, sideways trading is the more likely price action.

SHIB is trading at 2,831 satoshis at press time.

Unlike SHIB coin, DOGE could not show the same performance and has fallen by 4.13%.

After the test of the $0.27 level supported by high trading volume, buyers could not hold the initiative and once again touched the zone of the most liquidity around $0.24.

Currently, neither bulls nor bears are dominating as the altcoin is located in the sideways channel. One needs to buy when DOGE comes back to the $0.1940 zone or the resistance at $0.3495.