Bitcoin price had a bumpy ride this week, but it managed to set up a higher high, signaling a bullish development. However, the second half of the week has not been so kind as BTC continues to decline in search of a foothold.

The flagship cryptocurrency will likely find a support floor soon and kick-start an upswing that tags a key psychological level.

Bitcoin adoption does not seem to care about the massive drawdown taking place. From being obscure internet money to making headlines on mainstream media, the BTC story has evolved.

Likewise, the adoption of BTC has also seen a noticeable but positive change from Canada approving multiple Bitcoin ETFs to NYDIG partnering with NCR Corporation to offer the pioneer cryptocurrency to its customers. NCR has roughly $6 billion in assets under management and will offer digital assets with NYDIG acting as custodian to 24 million customers spread across 650 US banks.

On a similar note, the world’s biggest interdealer broker TP ICAP announced plans to launch a crypto trading platform for institutional investors. The platform is under development with the help of Fidelity and Zodia Custody, who will serve as custodians, while Flow Traders will provide the liquidity.

ARK Investments partnered with 21 Shares to market the “ARK 21 Shares Bitcoin ETF,” a new addition to the long line of members waiting for approval from the concerned authorities.

Most institutional investors prefer not to hold cryptocurrencies due to their complicated nature, which is why NYDIG, Fidelity and other companies that provide custody are being sought after. Bitcoin ETFs solve the problems these facilities face and will likely trigger a massive inflow of institutional capital.

While institutional capital continues to flow into the cryptocurrency industry, China’s clampdown has forced miners to move to countries with friendlier regulations. The Bitcoin hash rate has suffered the most from the most recent “Chinese ban on crypto,” declining more than 50% since May 15. Alongside, miner revenue dropped by roughly 42% in June.

Based on a recent study, BMC estimated that “the global mining industry’s sustainable electricity mix had grown to approximately 56 percent, during Q2 2021, making it one of the most sustainable industries globally.”

While critics indicate that BMC is optimistic in approximating results, Musk is yet to confirm if Tesla will roll back its decision and start accepting payments again.

Bitcoin price has experienced three significant drawdowns since its all-time high in mid-April. The first correction spanned 11 days starting from April 14 and pushed BTC down by 27%. The second was the most brutal sell-off as it pushed the flagship cryptocurrency down by 50% to $30,000.

Despite the last flash crash, Bitcoin price is still maintaining its range-bound movement and due to the extent of the previous dip, BTC is likely to retest the range high at $42,451.

The 4-hour demand zone ranging from $30,573 to $31,979 appears to be the perfect place for reversal, so investors need to keep a close eye on it. In a bearish case, BTC might extend below this barrier and tag the support level at $30,000.

Assuming a bounce from the $31,979 demand zone’s upper boundary, Bitcoin price might rally by 14% to encounter the first level of resistance at $36,600. Clearing this will allow BTC to test $39,146 and $40,000, which can be considered a significant psychological barrier. 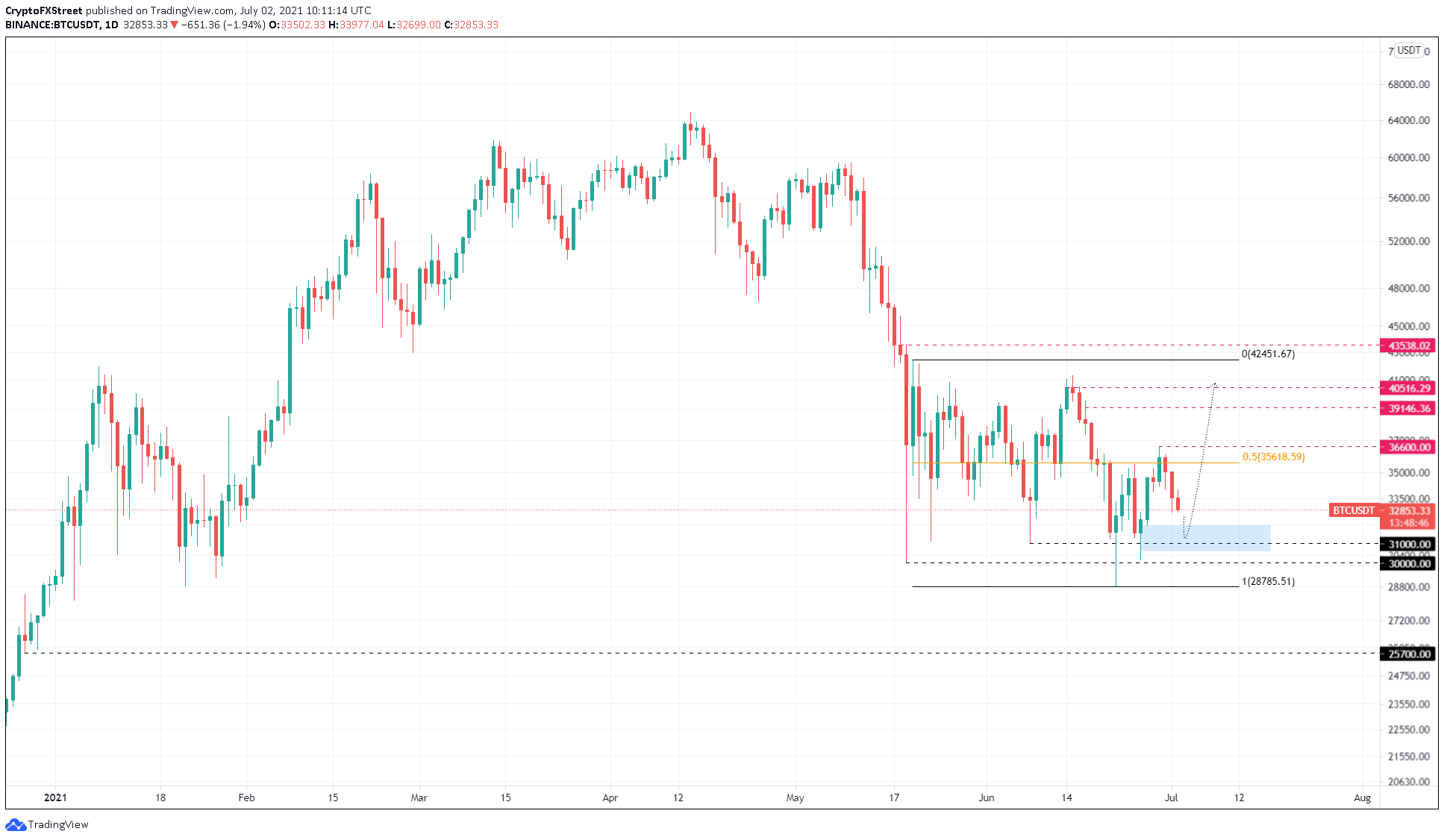 Supporting this massive upswing is the negative value from the Miners Position Index (MPI). This fundamental index is used to track a major shift in miners’ sentiment and is calculated by dividing the number of BTC leaving miners’ wallets by its 1-year moving average.

A negative value indicates that BTC tokens are not leaving miners’ wallets, indicating that the miners are optimistic about Bitcoin price performance in the near future. Additionally, it also suggests that there is no sell-side pressure from the mining community.

Further fortifying the optimism around Bitcoin price is the 365-day Market Value to Realized Value (MVRV) model, hovering in the opportunity zone around -10.78%. The negative number indicates that the short-term investors (weak hands) are selling to long-term holders (strong hands).

The last time this fundamental index dipped below -10% was in mid-December 2019, which was followed up by a 44% increase in Bitcoin price over the next two months.

The Stablecoin Supply Ratio (SSR) is a metric that is derived by dividing the BTC market cap by the aggregated market cap of all stablecoins. The lower the SSR is, the higher the potential buying power is.

At the Bitcoin price all-time high of nearly $65,000 in mid-April, SSR  was hovering at 30, and since then it has dropped by 66% to 10, where it currently stands. This inverse relationship depicts the market interest in accumulating BTC or other digital assets despite the brutal sell-off.

While some fundamentals and on-chain metrics hint at a bullish outlook, investors need to pay heed to not-so-bullish metrics. For instance, the Daily Active Addresses (DAA), as the name suggests, is an indicator that shows the number of investors interacting with the BTC blockchain.

After the 50% crash in mid-May, the number of DAA has stayed below 1 million. This is a major shift in trend as the DAA stayed above this threshold for more than ten months. The sudden decline is apparent considering the massive sell-off that liquidated billions of dollars worth of long and short positions across the board.

If Bitcoin price were to turn bullish and tag the $42,451 target mentioned above, the DAA has to see a corresponding increase. If not, then the probability of a rally might be fleeting.

Interestingly enough, retail investors holding between 0 to 10 BTC seem to be accumulating heavily since June 1. The number of such addresses increased from 37.77 million to 38.38 million, indicating a bullish development over the past month.

Market participants holding between 10 to 1,000 BTC are typically referred to as “sharks.” This category of addresses has plateaued at 146,000 addresses, which paints indecisiveness considering the range-bound moves.

Meanwhile, addresses holding between 1,000 to 1,000,000 BTC, known as whales, seem to be hesitant at the moment, which is why their numbers have dwindled from 2,156 to 2,141. Whales’ buying behavior is the most correlated with Bitcoin price, so the recent decline does not necessarily add to bullishness described from a technical perspective.

Given the lack of interest from whales, investors must note that a breakdown of the support level at $30,000 will confirm the inability of the buyers. A decisive daily candlestick close below the range low at $28,785 will invalidate the bullish thesis and lead to a Bitcoin price drop of roughly 10% toward $25,700.

The FX Poll is pointing to another week of consolidation at the current low levels before the granddaddy of cryptocurrencies embarks on a sustained rally. For the longer term, experts expect a move to above $37,000. 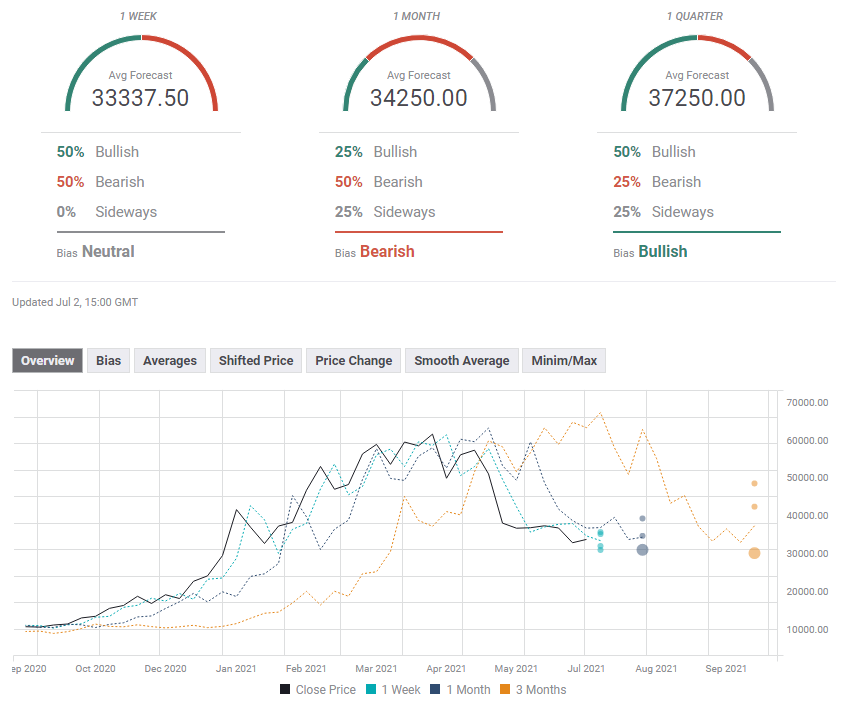 Cardano price positioned for bullish reversal, with 100% gains in sight

Cardano price action has been some of the most dismal and disappointing out of all the major cryptocurrencies. But Cardano’s fortunes are about to change.

XRP nodes run by Ripple fell out of sync for over 5 hours, disrupted wallet services

Public XRP ledger nodes “s1” and “s2” run by Ripple fell out of sync with the XRP ledger for over 5 hours yesterday. Non-custodial XRP wallet Xumm was not functioning well, disrupting usage and accessibility.