The United States Midterm Election results have a big chance to move Bitcoin price, with meaningful crypto legislation set to be discussed in the coming months. Despite the recent uncertainty in cryptocurrencies, exchange tokens have yielded double-digit gains when compared to Bitcoin. If US Consumer Price Index (CPI) numbers are higher than expected, though, Bitcoin price could nosedive.

Bitcoin price dipped ahead of meaningful US Midterm Elections

Bitcoin wiped out its recent gains on Monday ahead of the United States Midterm Election which are taking place on Tuesday and the crucial release of US Consumer Price Index data on Thursday at 13.30 GMT. The largest cryptocurrency by market capitalization is exchanging hands at $19,725 at the time of writing, down 5% overnight.

Bitcoin price has broken below the key $20,000 level as BTC holders remain uncertain of the United States Midterm Election outcome. The Democrats and Republicans are battling on the polls for control over the two big chambers of the US Congress, the Senate and the House of Representatives.

Bitcoin price could witness a profound impact as the outcome of the US Midterm Election could influence the industry globally for years. Regulators from the European Union and the International Monetary Fund and the US financial regulator, the Securities and Exchange Commission, have been calling for tougher rules on crypto trading.

Bitcoin and crypto regulation is key to adoption of cryptocurrencies. The decision of the US Congress and the United States government on two key bills: Digital Commodities Consumer Protection Act (DCCPA) and stablecoin regulation are central to the crypto industry. Ben Emons, Managing Director at economic policy consultant Global Macro Strategies, believes there is plenty of momentum for cryptocurrency regulation in Congress. Bills submitted by Republicans and Democrats are still going to be actively discussed and potentially voted on.

I think most likely is that the bills that have been floating in the House in particular are still going to be actively discussed and potentially voted on no matter what the outcome is, because there is a really strong bipartisan movement in the House, in particular on getting regulation for crypto.

How could a bipartisan congress effort impact Bitcoin price?

Bloomberg reported that based on a recent poll, Republicans could gain a majority in both chambers in the US Midterm Elections. Biden would still lead from the presidency for at least two more years, but the government and Congress could remain collaborative on virtual asset legislation.

Bitcoin and stablecoin regulation is therefore in the cards for Q1 2023. Mike Conaway, Former House Agriculture Committee Chairman, expressed optimism that talks on crypto bills won’t be derailed, even if there is a divided government in the coming year.

Conaway currently represents companies dealing in digital assets and he believes that most aspects of the cryptocurrency industry have remained reasonably bipartisan. He claims that approving crypto legislation would be an “easy triumph” for the White House, at the same time Congress would demonstrate to the public that Democrats and Republicans could still cooperate on issues.

Bitcoin price could therefore rally alongside wider acceptance of BTC as a form of payment, higher demand for the asset and liberalizing policies in crypto.

The US Midterm Election is not the only big event looming this week for Bitcoin price, as the US Consumer Price Index release will also be a key driver of sentiment among Bitcoin holders.

Bitcoin price could remain below the $20,000 level if inflation remains high. Currently inflation is at a 40-year high and as a result the US Federal Reserve (Fed) has cranked up interest rates, which has shifted the focus of Americans to the economy. However, opinion polls show the interest in cryptocurrencies is still high.

Bitcoin and cryptocurrencies have appeared on the United States electorate radar. Cryptocurrency platforms and exchanges have spent more on lobbyists ahead of the US Midterm Elections than they have in the preceding eight years.

Bitcoin and crypto companies and their staff have contributed $73 million to 2022 elections, according to data from the Wall Street Journal. This number is up $13 million from the 2020 cycle.

Bitcoin price failed to recoup its losses from last week. Native tokens from exchanges like OKB, Zipmex (ZMT), BTSE token (BTSE) and Loopring (LRC) yielded upwards of 25% gains over the past week.

FTT price crumbled under the rumor of FTX exchange’s insolvency and Binance exiting its position, selling $584 million worth of FTT tokens in the open market. However, other exchange tokens held steady ground, while Bitcoin price struggled to recover. 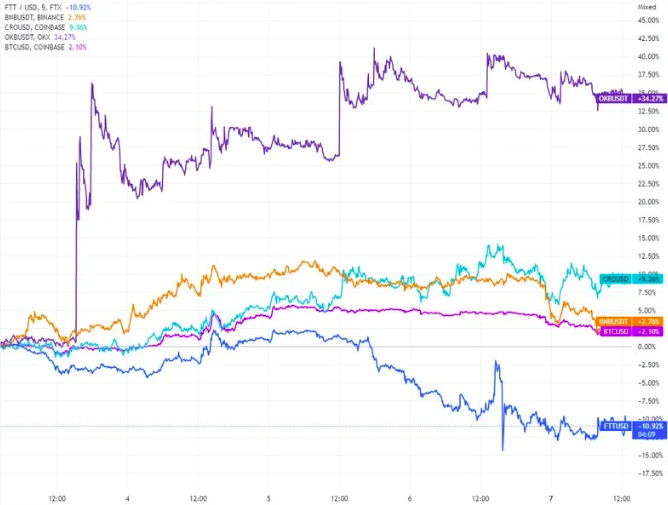 Binance’s BNB token slightly outperformed Bitcoin, alongside OKB and CRO tokens. Binance's native token holders are concerned that BNB is getting caught in a crossfire between its CEO Changpeng “CZ” Zhao and FTX’s Sam Bankman Fried.

Bitcoin price is awaiting an influx of volatility ahead of the US Midterm Election outcome and release of inflation data this week. The asset’s bullish thesis could be invalidated by rising inflation.