US regulator Securities and Exchange Commission (SEC) won its lawsuit against LBRY Inc after a New Hampshire judge announced that LBRY is an unregistered security, landing a milestone win for the regulator. This could spell doom for payment giant Ripple which is involved in a similar case with SEC.

US financial regulator, the Securities and Exchange Commission (SEC) has won a legal battle against LBRY Inc. A New Hampshire federal judge ruled in favor of the US SEC and declared LBC token an unregistered security. The judgment sent shockwaves through the entire cryptocurrency industry.

Since December 2020, the SEC has been embroiled in a legal battle with payment giant Ripple. The cross-border payment settlement firm garnered support from several industry giants, exchanges, blockchain associations and lobby groups in the US. Cryptocurrency exchange Coinbase, the Crypto Council, Cryptillian payment systems are among the eleven entities that filed an amicus curiae brief in support of Ripple.

The payment firm’s supporters are convinced that the court’s decision in the SEC v. Ripple lawsuit could have a lasting impact on the crypto industry. LBRY’s digital token, LBC also known as LBRY Credits was offered as a security. Judge Paul Barbadoro’s ruling fueled the ongoing debate on whether cryptocurrencies should be regulated as securities through federal enforcement.

Despite the SEC’s win in its lawsuit against operators of a decentralized video-sharing platform, XRP holders are positive and hopeful for Ripple’s win.

Based on a report from crypto intelligence platform CoinShares, XRP-related investment products saw inflows for the third week totaling $1.1 million month-to-date (MTD). Investors are still showing an interest in XRP, despite the latest developments in the lawsuit.

The SEC case is still ongoing, but recent events seem to have given confidence to investors. pic.twitter.com/35IdURLBZI

Arslan Butt, a technical analyst, evaluated the XRPUSD price chart and noted that the outlook remains strongly bearish. XRP price broke past a triple bottom pattern at $0.45 and yielded 7% losses for holders. 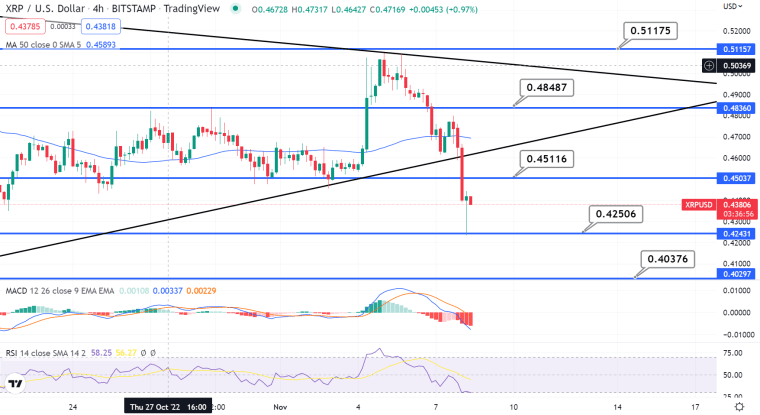 XRP price continued its decline post the triple bottom and wiped out gains from the past two weeks. The analyst’s downside target for XRP price is $0.42; it is currently trading just above at $0.4380. Yet, if XRP price can recover from the drop below $0.45, it could invalidate the bearish thesis. In such a scenario, XRP price’s bullish target would be $0.48 then $0.51.