Bitcoin price is staggering between a rock and a hard place a couple of days after it abandoned the mission to close the gap to $28,000. The largest cryptocurrency bounced off support at $20,800 on Friday but has not been able to step above seller congestion around $21,818. On the other time, investors are jittery, citing overhanging fear of declines extending to June lows roughly at $18,776.

What to expect from Powell's speech on Friday

The United States Federal Reserve's annual economic symposium in Jackson Hole, Wyoming, will take place on Friday. Jerome Powell, the Fed chair, is expected to come out strong on the tightening cycle that has seen continuous interest in 2022. The crypto market's turbulence can highly be attributed to the Fed's tightening monetary policy.

"I would expect that Powell lays out quite clearly that the pace of future rate hikes may slow but that they have much further to climb and are likely to remain high for some time," Michael Kramer, the founder of Mott Capital Management, weighed in on the matter in a weekly markets update.

Sharing the same sentiment with Kramer is David Duong, the head of institutional research at Coinbase, who reckoned in a markets update that Powell will "emphasize that the tightening cycle isn't over yet."

The roughly 10% drop in Bitcoin price last week spooked investors, with more questions than answers arising – is the bottom price at $18,776 sufficient to turn the bear market around? And will Bitcoin hit $28,000 in the coming weeks?

Coinbase's David Duong reasons that "BTC will likely retest support at $20,830 and $19,230 over the coming few weeks." Two levels likely to determine Bitcoin price's next move are the 200-day Simple Moving Average (SMA) on the upside and the buyer congestion at $20,800. A break above this moving average would affirm the bulls' return in the market and push for $28,000.

On the downside, a daily close below $20,800 will trigger massive losses due to panic selling. In this case, support is projected at $18,776 – the June low. 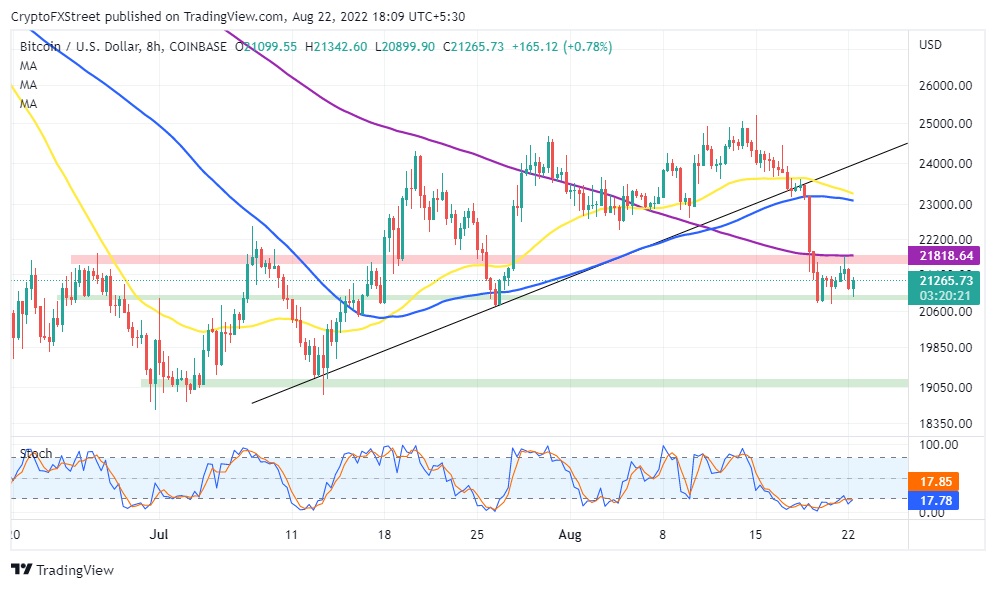 Despite the above pessimistic analysis, the same eight-hour chart paints a bullish picture for Bitcoin price. As highlighted by the Stochastic, recovery from the current oversold conditions could see BTC make headway above the 200-day SMA.