Over the last 5 days, the price of Bitcoin has soared by 31% or $2,000. At the time of writing, the benchmark cryptocurrency trying to catch on above $8,200. On the intraday charts, it is clearly seen how exceeding the threshold levels of $7,000 and $8,000 caused a wave of profit taking, but pretty quickly it was ended up by the new wave of purchases. The return of public interest was so intense that previous levels of consolidation were simply swept away. Given this dynamic, the next stop could be level at $9,000 and local peaks of May 2018 at $9,500.

FOMO (fear of missed opportunities) has returned to the market, as retail investors became the real driving force behind this dynamic. Nevertheless, it must be remembered that in addition to optimism and patterns similar to the 2017 rally, many new participants appeared on the market, who firstly benefited from pushing the market to the bottom, and then it would be profitable for them to sell at highs.

It is equally important that growth not only increases but also widens, actively engage altcoins in the rally. Since May 10, the total capitalization of the cryptocurrency market has grown by $47 billion. Over the past 24 hours, the XRP token shows the most significant growth by 21% to $0.38. Probably, the coin attracts demand due to the low price, while market participants remember it at a price of around $4. Ethereum (ETH) and Bitcoin Cash (BCH) add 10% and 12%, respectively. At the moment it is difficult to find a cryptocurrency in the red zone. The Bitcoin domination index has grown in recent days, reaching 60%, however, it gave back some gains to 59.2%.

The cherry on the top was the news that Amazon’s Whole Foods now accepts Bitcoin (BTC), Ethereum (ETH), Bitcoin Cash (BCH) and Gemini Dollar (GUSD). This made possible by the partnership of the Winklevoss twin project Gemini with payment start-up Flexa. In addition to Whole Foods, people can spend their digital currencies at Starbucks, Baskin Robbins, Nordstrom, and others. It should be noted that so far there were no “leaks” about the project, and the launch took place exactly at the right moment, heating the growth impulse. Whether it is a coincidence or not, the twins won't tell, but they are pushing the entire crypto sector to integrate with the real world. 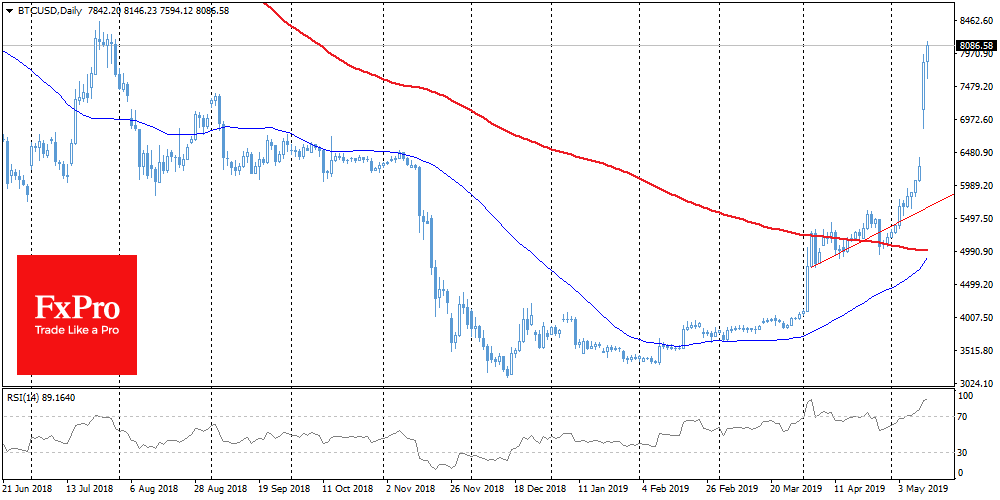