The world’s largest cryptocurrency exchange is looking to be licensed worldwide, while its chief executive officer, Changpeng Zhao, is open to stepping down.

Binance to set up regional headquarters around the world

Binance has been facing scrutiny from financial regulators globally, having received numerous warnings from authorities that seek to crack down on the new asset class.

In light of the recent turn of events, Binance has set its sights on establishing various regional headquarters around the world while seeking licenses wherever possible, according to Zhao.

The crypto exchange has been in the spotlight for thriving in a largely unregulated market. Financial regulators in the United Kingdom, Germany, Italy, Japan, Thailand and Hong Kong have raised concerns about Binance.

The CEO said he plans to improve relations with regulators, and the firm would seek their approval. Binance would break its decentralized structure as it aims to set up regional headquarters around the world.

Zhao added that the crypto platform would be changing its mindset from a tech startup to acting as a financial institution, with required licensing and compliance procedures set in place. He added that “playing within the rules” and being completely compliant is a better trade-off for the longer term.

While Zhao stated that he does not intend to leave immediately, he is open to pass control to a successor who could “do a better job” and lead the company.

The CEO added that this move could be part of a turning point to become a regulated financial institution. An ideal candidate would be a leader with a strong regulatory background. Until a suitable substitute is found, Zhao said that he would be “honored to run Binance as a regulated institution.”

Due to recent regulatory pressure, Binance has halted certain services, including highly leveraged positions and the trading of stock tokens. Daily withdrawal limits have also recently been adjusted from 2 BTC to 0.06 BTC for unverified accounts on the platform.

Despite the regulatory backlash, Zhao previously revealed that the Binance US arm was looking to explore the possibility of going public in the United States.

Binance Coin price has had a 22% bounce from the swing low on July 20, but the recovery could soon be over.

Binance Coin price faces indecision as a death cross is approaching on the daily chart. The 50-day Simple Moving Average (SMA) and the 200-day SMA is nearing a collision, which could spell trouble for BNB.

Although Binance Coin price was able to break above the declining resistance trend line, which currently acts as support, failure to close above this level at $307 would render the recent recovery momentary, not leading to a superior rush higher.

Should Binance Coin price continue to be buoyed by the aforementioned support level, the 200-day SMA also acts as a critical line of defense. Investors should note that the BNB trading volume has subsided, which indicates a lack of interest. 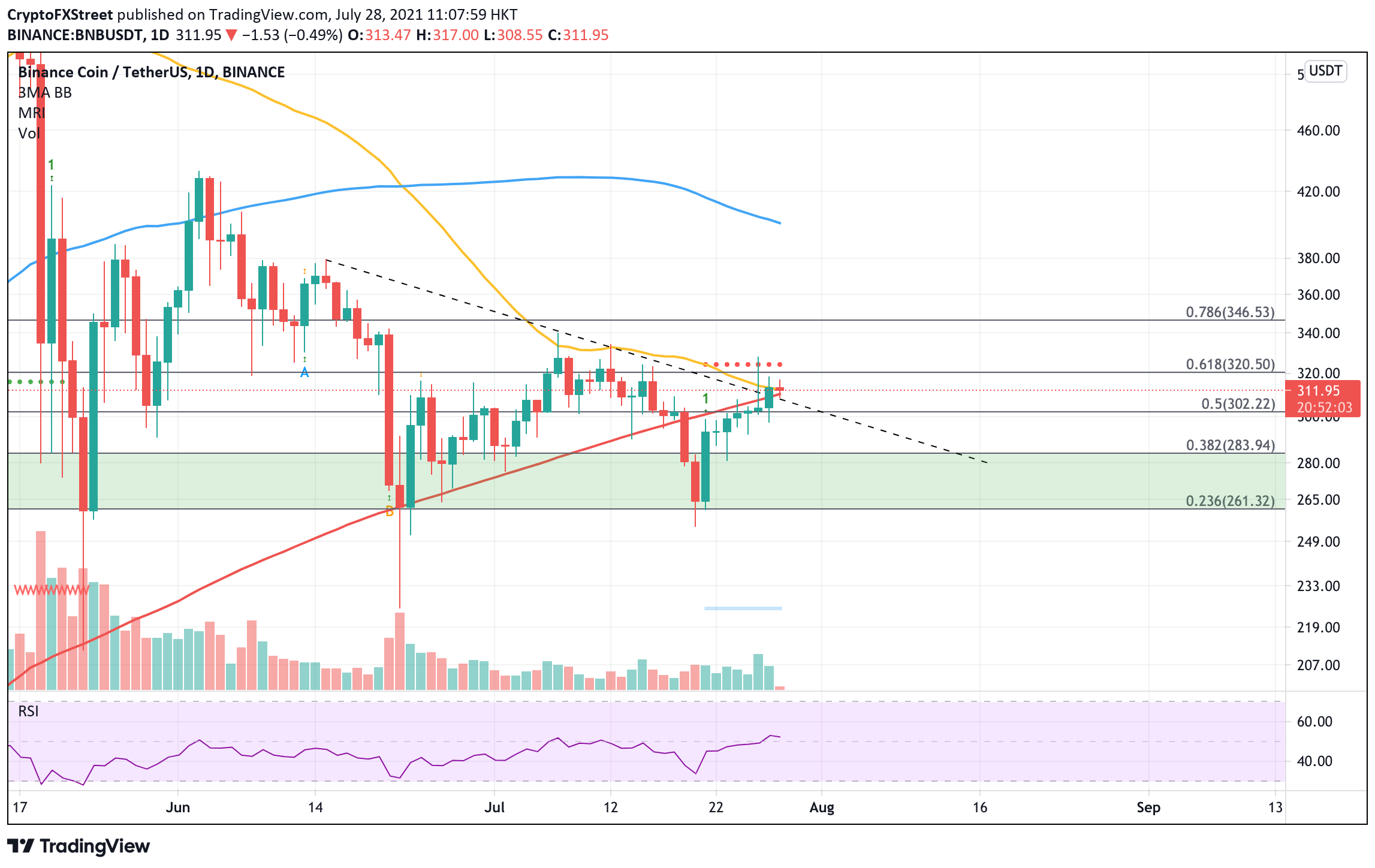 The 38.2% Fibonacci retracement level at $320 acts as stiff resistance for Binance Coin price. A push higher would be unlikely, given the resistance line from the Momentum Reversal Indicator (MRI).

A spike in selling pressure incentivized by the death cross could see Binance Coin price retest the diagonal support before dipping into the demand zone between the 61.8% Fibonacci retracement level and the 78.6% Fibonacci extension level at $283 and $258, respectively.