Axie Infinity (AXS) price is in a consolidation, a squeeze coming from both sides. The lows are getting higher, and the highs are reaching lower. With both trend lines coming in from both sides, a breakout looks to be set for the coming hours or days.

With momentum building toward the pop, it will be essential to see how price action will react again on both sides. No coincidence that two barriers are in play on almost the same distance of where price action is now. A breakout does not mean that AXS price will break out of the bandwidth in which it has been range-trading since August 10.

AXS could break out either way, but bulls remain in control

Seeing that Axie Infinity is in a bullish trend since this summer, expect momentum to continue as fundamentally nothing has changed on the interest for buyers running AXS price further up. There are two ways this could unfold. 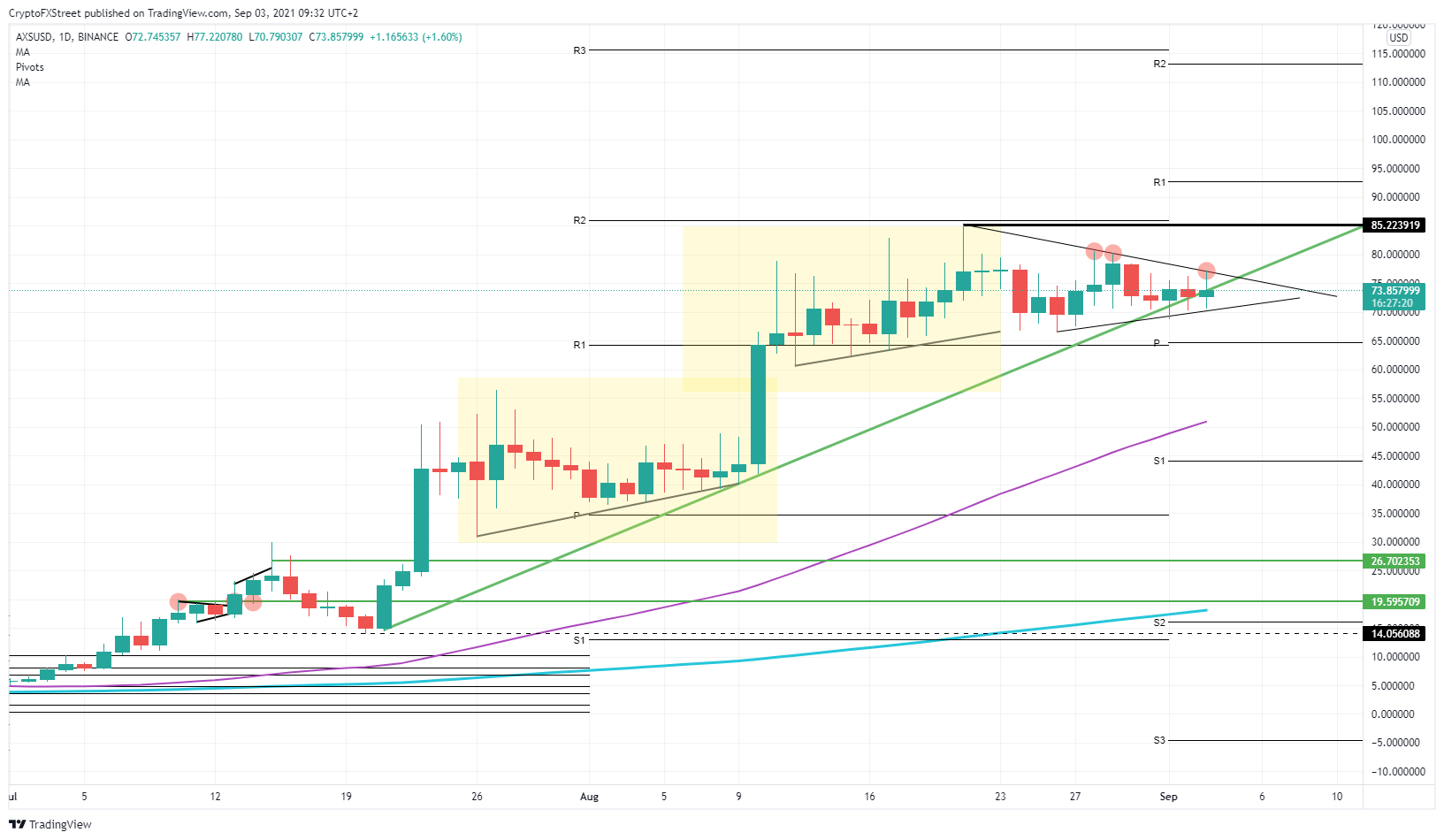 The first option would be that AXS breaks the descending trend line to the upside and goes for the second test of $85.22. That level was formed on August 21, and has not seen a retest since then. Of course, price action will be rejected at first. A minor correction back to the black descending trend line should give a bounce off there and swing AXS price back to $85.22 and break through that level. The first price target then would be $92.70, which is the R1 monthly resistance level.

A second scenario, which would be even more interesting, is when AXS price action breaks the black ascending trend line to the downside. Support would be found at $65. That level falls in line with the monthly pivot for this month and was the R1 resistance level the previous month. This means it holdsgreat importance already proven in the past. This level would attract much more volume and buyers. That would fuel the rally with more petrol in the tank and could cover more ground. The significant, psychological $100 level would then be in the cards.

XLM price continues to pull back from the highs it made on Saturday. There are growing concerns regarding its ability to maintain its present momentum. XLM price has a very bullish set up on its $0.01/3-box Point and Figure chart.

Dogecoin price has gained as much as 15% during the Monday sessions, outperforming nearly all significant cryptocurrencies. Roughly half of that gain has been retraced, but buyers show resilience in maintaining a stable trading range near ...

Cardano price has been a source of frustration for bulls and bears. Multiple setups and positions for bearish and bullish breakouts have been rejected, with the ultimate result being continued constriction in price action.