AVAX price has been dragging its feet since August 25. Although there were a few upticks in volatility, Avalanche bulls seem to be out of the picture now. AVAX is currently hovering above a fat support area and shows signs of bouncing off of it and reaching record highs.

There are three reasons why this move is likely to occur; technicals, fundamentals and tokenomics.

AVAX price is due for a massive breakout: Technicals

AVAX price has seen a 2,513% return in 2021 as it rallied from $3.02 to an all-time high of $78.86. This massive ascent is a result of the right conditions with perfect fundamentals. Touching more on the current market phase and the technicals can help identify if AVAX is ready for another leg up.

Altcoins, especially Layer 1 coins like SOL, LUNA, FTM and others, have been exploding. AVAX is also one of these coins, and it too set up a new all-time high on September 24. Since then, Avalanche has corrected, setting up three higher lows and two lower highs. Connecting these swing points using trend lines results in the formation of an ambiguous technical formation known as a symmetrical triangle.

Since this setup has no directional bias, a breakout could happen in either direction. Investors need to keep their eyes peeled, therefore, as AVAX gets squeezed with each passing day. The further it travels toward the triangle’s apex, the more volatile the eventual breakout is likely to be.

The target for this formation can be obtained by adding the distance between the first swing high and low to the breakout point. Since the overall market, including Bitcoin, is in a bullish state, investors can expect AVAX price to be biased to breaching the upper trend line at $70.40.

A decisive daily candlestick close above this barrier will theoretically confirm a breakout and forecast a 40% ascent to $100.

Supporting this move higher is the daily demand zone, ranging from $46.97 to $56.50. After the Momentum Reversal Indicator (MRI) flashed a red ‘one’ sell signal, AVAX dropped 10% and came extremely close to retesting the mentioned support area, but so far it has not. Going forward, therefore, investors can expect the buying pressure to receive an extra oomph if AVAX dips into this zone.

The resulting bullish momentum will propel AVAX 78% higher to reach its intended target at $100. In some cases, the AVAX price could extend further to retest the 161.8% trend-based Fibonacci extension level at $112.56.

If the buying pressure persists, 261.8% level at $162 will be where Avalanche bulls set up a new high. 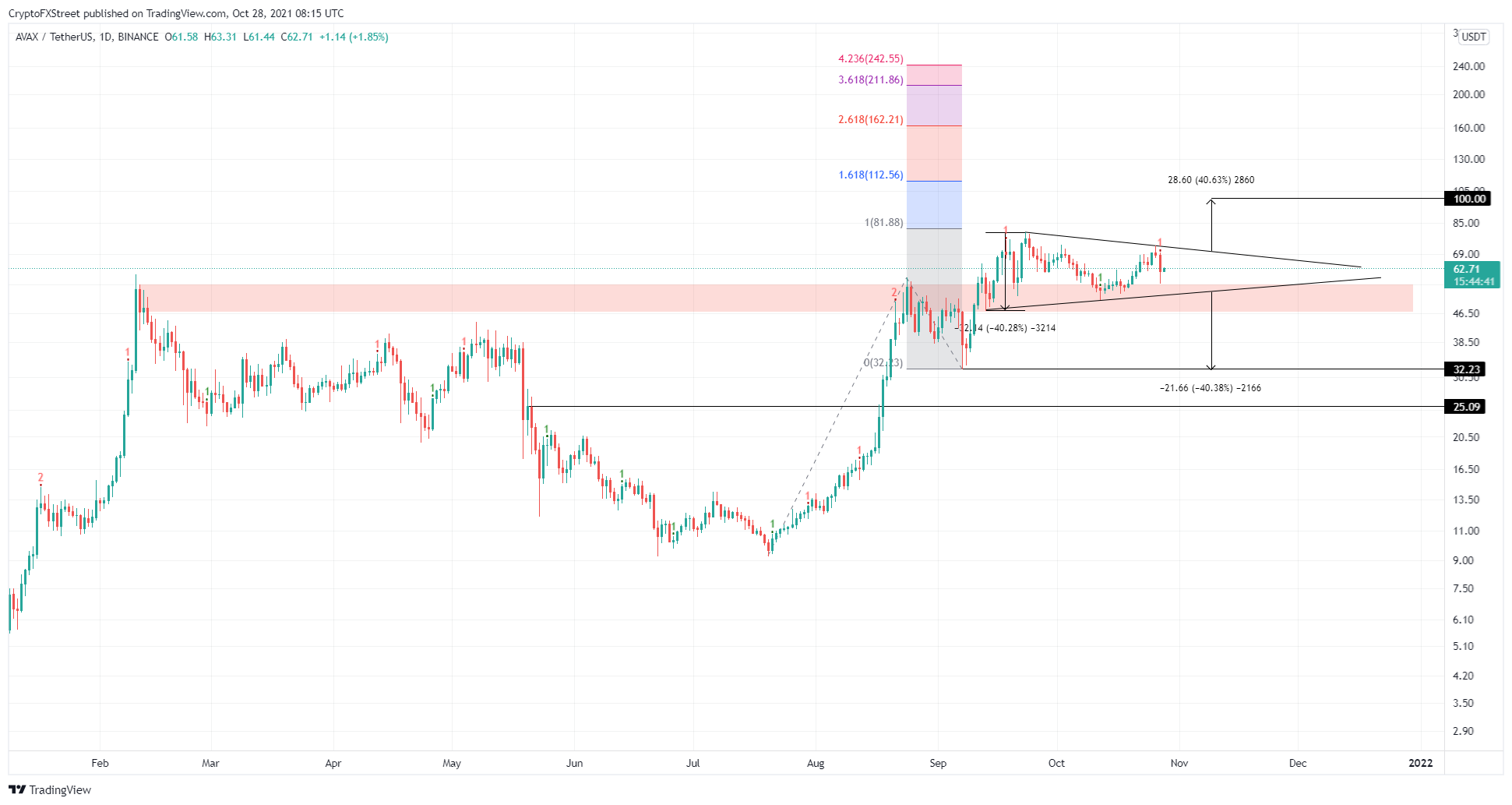 Fundamentals for Avalanche are programmed to be bullish

While AVAX’s short-term technicals are hinting at an explosive move higher, the fundamentals are suggesting that the long-term outlook for Avalanche is brighter. Avalanche takes a cue from Bitcoin and hard caps its total supply at $720 million. Unlike many projects, however, Avalanche has allocated half of its supply toward staking rewards while keeping the remaining supply toward community, developers, rewards, and so on.

Interestingly, as time progresses, AVAX supply will continue to reduce by an inherent burn mechanism that the project leverages. Avalanche burns 100% of the fees, which effectively reduces the total supply of tokens.

Etheruem introduced a similar mechanism to its ecosystem by burning a portion of the fees via EIP-1559. This creates a negative supply shock, which will add a tailwind to the market value of tokens.  Therefore, AVAX price will increase in value over a larger time frame.

Staking rewards reduce the remainder of the sell-side pressure

Burning tokens reduces the inflation rate and decreases the supply of tokens circulating in the market. Avalanche took this one step further, however, by allocating the 360 million AVAX tokens as rewards for stakers.

360 Million AVAX were minted at launch, whilst the other 360 Million will be used as Staking rewards released over decades.

On October 29, roughly $15.3 million worth of AVAX tokens are staked and are yielding a 9.53% reward to the stakers. It ranks sixth in terms of value staked just after Polkadot and Terra. These statistics suggest that long-term investors are not planning to sell their tokens anytime soon, effectively reducing potential selling pressure.

The outlook for AVAX price looks bright, be it from a short-term or a long-term perspective. If Avalanche bulls fail to keep the token above the $46.97 to $56.50 demand zone, however, that forecast will alter and suggest weakness among holders.

A decisive daily close below $46.97 will confirm the start of the symmetrical triangle’s bearish thesis and crash AVAX price by 40% to $32.23. In some cases, AVAX could extend to the $25.09 support floor, at that point, however, it may attempt a comeback.