Today’s payrolls is clearly the market-mover. Estimates range from 335,000 to 1 million, according to Bloomberg, with the ADP private sector estimate at 978,000 (but ADP lacking credibility after last month’s epic fail). The consensus remains about 650,000.

A good claims number yesterday was priced in, but nevertheless a knee-jerk reaction pushed yields and the dollar up when the number was a bigger than expected surprise. We have to consider whether today’s payrolls can deliver a second surprise and thus a second price bump. What if the NFP is under the consensus (650,000) or should we be looking at the ADP (978,000)?

The probability of a disappointment (under 500,000) is low but not zero. As noted above, we are already getting a flood of “explanations” about the curious case of the low labor supply when there are 8 million-plus jobs still to be recovered and demand for labor is high.

From a technical perspective, the question is whether any of the price moves yesterday constitute a breakout. We are inclined to the view that one day’s data hardly ever signals a reversal. We want confirmation. Having said that, while we are not getting a taper tantrum in bonds, we are seeing divergence in market vs. Fed expectations for talking about tapering and thus the end-point. See the splendid chart from Gittler at BDSwiss, which captures the issue in one fell swoop. Weirdly, you can have falling inflation expectations and still have rising taper/rate hike expectations as long as the job market is closer to full recovery than we thought only two days ago. 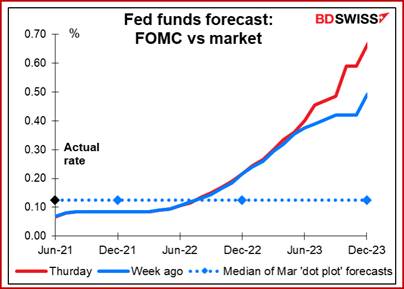 Will the Fed require all 8 million to get re-employed? That seems silly. How about half, or 4 million? Let’s assume that 4 million new jobs represent the “substantial further progress” that the Fed requires. Can we get 4 million newly employed by the time of the September FOMC? Yes. That would mean tapering to the point of a hike in the Fed funds rate about one year from now. If not sooner.

One “good” thing to come out of this Event in that the market believed the Fed that inflation will be transitory and also that its priority is the jobs market. It’s not yet clear that the market has absorbed some of the Fed’s nuances–that job growth has to include minorities and be accompanied by decent wages.

Inflation Tidbit: Remember yesterday’s sticky vs. flexible prices from the Atlanta Fed? This time we have Covid-sensitive prices vs. Covid-insensitive from the San Francisco Fed. So far, so good. Then there is the Cleveland Fed’s trimmed mean CPI, which removes volatile prices to get underlying inflation. The report in the NYT quotes a JP Morgan economist who says we can make it even simpler--just look at rents. The “rental component of C.P.I. (as well as the ‘owner’s equivalent rent’ category, which measures housing costs for homeowners) is the largest single item in the overall price index, and should be less affected by the pandemic than some other categories. If rents start to rise rapidly beyond a few hot markets, overall inflation could follow.” As it happens, we do have rental inflation but only in some hotspots, and it’s already receding in places like San Francisco. 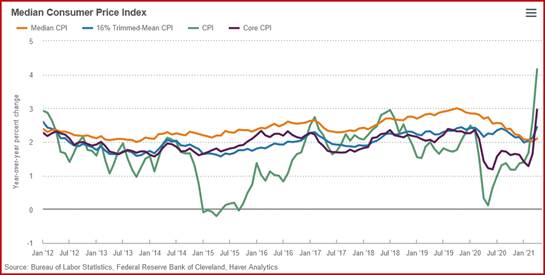