The Friday payrolls data in the US is going to dominate the relative importance of data releases this week, even if it shouldn’t because July conditions were still in transition and then complicated by the Delta surge. Looming over it all is the Delta Gloom we saw on Friday, not a Delta Panic that drives equities down but enough to revive risk-off sentiment, even if it failed to lift the US dollar by much.

This raises the question again of whether the corrective dollar down move has legs. We hesitate to call an end to a movie that has some real momentum, but the Commitment of Traders report shows a drop in euro longs and the chart shows the euro is overbought. Get ready.

More than one report has it that Delta will change central bank minds, especially the Reserve Bank of Australia but also the Bank of England. The RBA was expected to announce tapering but recent outbreaks and disappointing data is thought to have put an end to that, hence the falling AUD. We question whether central banks are willing to risk credibility with too-fast a concession. The BoE, on the other hand, was not expected to change much, if anything, but with the vaccination rate so high and caseload falling so far, maybe it will be emboldened. Again, this puts Delta as the top influence, and central banks are supposed to prefer hard economic data, not forecasts of data based on an outside influence.

The WSJ has a story today saying eurozone government bonds are losing ground to 5-month lows as buyers flood to them on the assumption growth will be poor as Delta spreads and the ECB will be forced to keep its dovish stance for even longer than it projected at the last policy meeting. The US is already over pre-pandemic levels but Europe won’t get there until next year. The Fed is going to taper within 6 months but the ECB is likely to offer additional easing. This is the view of economists at Big Banks including JP Morgan) and marks the difference between the ECB and other central banks (US, UK, Canada, Australia, and New Zealand) where “inflation is expected to pick up and they are talking about the need to normalize.”

Well, we noted that risk on/risk off is more refined and country-specific than in recent years and not a blanket one-size-fits-all, but these comments are very scary—the ECB will ease more? One of the analysts says “To be credible and hit the 2% target, they likely need to ease further.” This is throwing down a gauntlet to Lagarde and we await a response.

As the week begins, we are beset on all sides with uncertainties. We may have to wait for Friday’s payrolls to get direction. Even with July still in transition and complicated by the Delta Gloom, payrolls are expected up by more than June at about 900,000 or even 1 million. June had added 850,000, the best in 10 months and against a forecast of 700,000. If July delivers a comparable overshoot, we could get 1.2-1.4 million or more. This may well convert risk-off that favors the safe-haven dollar to risk-on that favors the high-growth dollar.

Let’s get one thing out of the way: will Delta derail the economic recovery? No. It probably won’t even slow it down all that much, for the simple reason that vaccination rates are still rising in the US, Anglo countries, Europe, and “developed Asia,” and those are the countries whose combined GDP accounts for the lion’s share of global GDP. This is the point of view of Nobel economist Krugman and it makes sense. Besides, whether mandated by governments or by private enterprises, the unvaccinated and even anti-vaxxers are being pressured mightily to cave in. This is like seatbelts in cars or the anti-smoking crusade, only faster-moving. We are not getting a great summer because of Delta but we are likely to get a great Q4. Get ready.

Fun Tidbit: We received one of those unsolicited stock market advisories offers from one of the usual suspects (that keeps offering the same fear-mongering pseudo-analysis under multiple names). This time it included the CNN Fear and Greed Index, which includes the main indicator, VIX, plus six others (junk bond and safe-haven equity demand, puts and calls, volume, momentum, etc.).

We have never seen any evidence that it has any predictive value. Equity indices can and do go up even as fear reaches a scary level. In fact, fear was lesser last week than the week and the month before, which (to be fair) included the meltdown on July 19 when the S&P fell 700 points. We are copying the graphic to show that no single index captures fear and greed. We are stuck with deducing sentiment from changes in yields and equity indices. It’s a laborious, tedious, complicated process with no guarantee of usable results. There are no shortcuts. 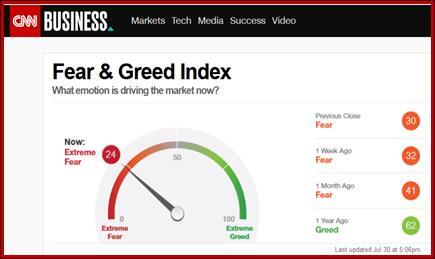 The Shiba-Inu-themed cryptocurrency’s utility is rising with news of AMC’s adoption of DOGE as a payment method. Traders are now anticipating a reduction in transaction fees and a recovery in DOGE.