The Federal Reserve has surprised markets with an abrupt hawkish shift that has triggered substantial volatility in currency markets. Valeria Bednarik and Yohay Elam explain the surprise, discuss technical level and the next moves in FX and beyond.

Yohay Elam: The Federal Reserve has shocked markets by signaling not one, but two interest rate hikes in 2023. Moreover, the debate about tapering bond-buys has begun. Currency markets have undoubtedly reacted. The dollar is up, while all the rest, including gold, are down. Currency moves seem much wilder than those in US stocks.

Valeria Bednarik: Stocks have anticipated a tighter monetary policy, while the FX board remained in wait-and-see for a confirmation. Anyway! King Dollar is up. Immunization progresses and life is returning to normal in the US. So, is this the first step toward a bullish trend for the greenback?

Yohay Elam: Yes, good to see some volatility in currencies. When banks are tightening at different paces, things become more interesting than the race to the bottom

Valeria Bednarik: Indeed. The Federal Reserve has detached itself from its overseas counterparts. Although we know they will follow the lead sooner rather than later

Yohay Elam: It seems like a big shift from the Fed, but I'm still surprised

Valeria Bednarik: You were waiting for a more cautious Powell?

Yohay Elam: Yes, because last year, they changed their policy, stating that they would let inflation run and compensate for past weakness in price rises, allowing employment to recover. He also said they are outcome-based, not outlook-based

Valeria Bednarik: And all of the sudden, the dot-plot reflects outlook-based...

Yohay Elam: Exactly, at the first sight of higher inflation and without enough progress in employment, they have already begun the taper talk. But I'm sure Powell is happy he didn't cause a taper tantrum, so I guess that where I see a loss of credibility, he sees success
and I cannot complain about forex volatility!

Valeria Bednarik: Finally some action. And regarding inflation, true, they said it can run above average without generating an immediate response, but 5% is a scary number, even for FOMC members I guess.

Valeria Bednarik: Yes but it is still 5%. So, the Fed has turned hawkish, while the rest of the central banks are not. Which one is the most dovish?

Valeria Bednarik: Don't say the BOJ. Yeah, ECB also for me. Which leads us to EUR/USD. It broke below the critical 1.20 mark without looking back. Keeping in mind the path in majors is not always straight, were would you say its the next comfort level?

Yohay Elam: I seem to have forgotten the BOJ, no action in their meetings...

Valeria Bednarik: I do expect an approach to the 1.8000 figure at this point.

Yohay Elam: I guess we'll have a typical EUR/USD dead-cat bounce before a fall toward 1.1860 as the first target. Since the latest ECB meeting, officials at the central bank have been more united about the dovish message -- more bond-buying is needed. But maybe after the Fed awakening, we'll hear something else from the ECB

Valeria Bednarik: Yeah, as usual, they will follow the lead. Although it won't be in the next couple of months. A "cheaper" EUR is for the most convenience to the EU. European policymakers should be more than happy now that it is below 1.20.

Yohay Elam: Champagne is popping in Lagarde's office, undoubtedly. The BOE is next up, GBP/USD suffered a massive downfall

Valeria Bednarik: Yes! the BOE could be the next to move into tightening. And I'm not sure if such pound weakness could be justified with Brexit jitters and the reopening delay. For me, the pound should be stronger than the common currency. The dust needs to be settled tho.

Yohay Elam: Indeed, I think they'll hint at rates rising sooner than later. Perhaps the BOE will see through the current covid wave. With more vaccines, it could be over within a few weeks. I think GBP/USD could bottom out with the BOE

Valeria Bednarik: Agreed. They meet next week, so fun there expected also.

Yohay Elam: The Aussie and the kiwi managed to recover after both posted upbeat figures.  The Canadian dollar has room to move higher with oil prices and the BOC's tapering. Higher rates everywhere is bad news for gold. XAU/USD < $1,800, does it have more room to fall?

Valeria Bednarik: Yeah, it can complete that 100% retracement to 1,750. I would say that we can expect some stability around there before the next directional movement. 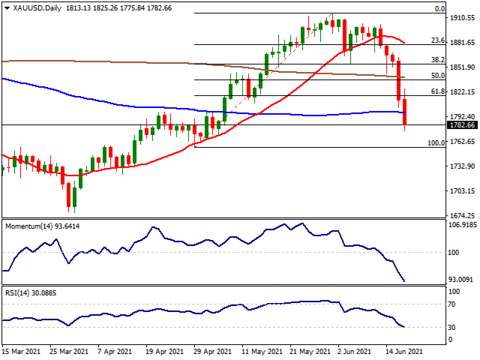 Valeria Bednarik: Yes! and we are more than ready for it

Yohay Elam: Higher rates mean other supposed hedges against inflation could become less attractive. Can the small drop in Bitcoin be attributed to the Fed? Or is the crypto-sphere just doing its own thing?

Valeria Bednarik: I would go for the second. cryptos may have some sort of safe-haven functionality, but hardly worth trying to find a correlation between fundamentals and them. The crypto market is young, like a teenager, totally hormonal :lengua_fuera:

Yohay Elam: Yeah, mood swings, and if Powell is the most important person in forex, crypto types have their own VIP - Elon Musk

Yohay Elam: It amazes me how Bitcoin, the decentralization dream come true, is so centered on one person

Valeria Bednarik: Well, I think traders are to blame. There is a clear lack of fundamental drivers for the crypto market, and well, something needed to be done :guiño: Investors use the slightless excuse to trigger a trade

Yohay Elam: Indeed, and as you said, it's a young teenager, lots of energy and distractions

Yohay Elam: Apart from the BOE, I think that next week's Core PCE will become more important, now that the Fed is more worried about inflation

Valeria Bednarik: Inflation is back in the hot spot.

Yohay Elam: The topic was off for so many years. Perhaps the Great Recession is finally over

Valeria Bednarik: Well,  maybe. We just need to do what we are used to: wait-and-see a bit more

Yohay Elam: At least we can hope that this wait is accompanied by much higher volatility

The Consumer Confidence Index rose to its highest level since April, and now sits more than 12 points higher than where it was just two months ago.