Finally, the dreaded first half of the year is over and the garlands were handed out to only the energy sector. 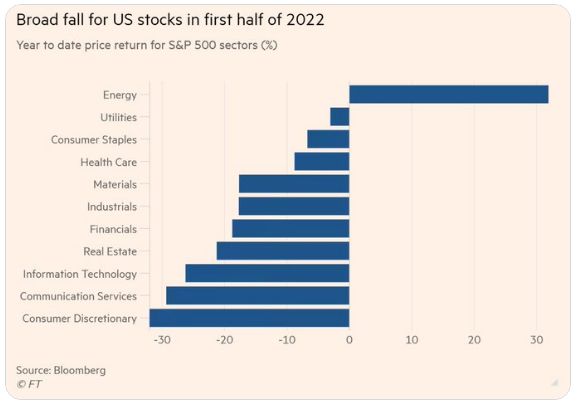 The combination of rising interest rates, souring consumer sentiment, soaring energy prices and strengthening inflation have all combined to give risk assets the knock they probably deserved after years of easy monetary policy. In reality, we can probably trace this current asset bubble all the way back to the 2008 Great Financial Crisis. Central banks engaged in quantitative easing on a massive scale, which averted another Great Depression. Instead of then resting on their laurels, central bankers were emboldened to repeat the trick when the pandemic struck and took it a step too far in pumping unprecedented amounts of stimulus into the economy. All assets surged in a rising tide, and inflation then moved from transitory to a freight train.

Now we have the complete opposite situation with tightening financial conditions and rising interest rates, so it is no surprise we are witnessing one of the worst starts to the year in history. In a complete mind melt for multi-asset portfolios, not only have equities fallen but so too has the supposed safe haven of bonds. For too long the Fed has been the only buyer in town, so no surprise again once they step away and begin hiking that bond prices have only one way down, a straight line.

The last 8 times the S&P 500 was down in a calendar year, Bonds finished the year up, cushioning the blow.

Very different story thus far in 2022 with Stocks and Bonds both down over 10%, something we've never seen. pic.twitter.com/QypyjXuROs

In fact, it could be the worst year in history for the bond market. Pension retirement ages are likely going to get pushed out across the board as portfolios take an unprecedented knock.

The US bond market is on pace for its worst year in history with a loss of 10.4%.

Entering the year, the 2.9% decline for bonds in 1994 was the largest ever. pic.twitter.com/nJqCgolEmN

There may be more pain in store, especially for Europe, as it remains far more exposed to energy price inflation, which will only worsen this winter.

Read my @opinion column from earlier this week on the worsening electricity crisis in Europe. ️Link: https://t.co/P8J25adqzg pic.twitter.com/8Z4qHIfdkH

We had California blackouts a few years ago, and Europeans looked on in disbelief. Now blackouts may be coming to an EU state near you this winter.

The US economy contracted in Q1, and Q2 is due for release in a few weeks. July 28 is the date, but in advance the Atlanta Fed's useful predictor tool GDPNow is already predicting a recession.

On June 30, the #GDPNow model nowcast of real GDP growth in Q22022 is -1.0%. https://t.co/T7FoDdgYos #ATLFedResearch
Download our EconomyNow app or go to our website for the latest GDPNow nowcast. https://t.co/NOSwMl7Jms pic.twitter.com/t87bBJGRsv

We have mentioned this repeatedly, but the macro economy is the main driver of corporate earnings. Macro determines EPS, which in turn determines stock prices. Consensus EPS for next year looks too high, and we thought you might find the latest observations from Douglas Orr of note as we tend to agree with them. We think this quarter will be ok on the earnings front, but guidance will be slashed by many companies. This will finally see analysts bring those earnings estimates down. That will lead to more losses for the main indices.

$NASDAQ has de-rated to 20X from 30X in line with higher real bond yields as we move from QE to QT.

To make matters worse, the US looks expensive versus the ROW, but big tech had been justifying such a premium. After Netflix, Meta Platforms and Amazon, does that still seem plausible? We think not.

Our base case remains bearish with a move to the pandemic starting point at $338, our target. This could trigger after the upcoming earnings season. After all, it seems every day we get a new stock moving to pre-pandemic levels. The Fed is turning policy back, so equity valuations should also follow suit. Remember in 2019 that the Fed was beginning to tighten and start to turn off the QE program. The pandemic changed all this now, and we are back to square one but with massive inflation. 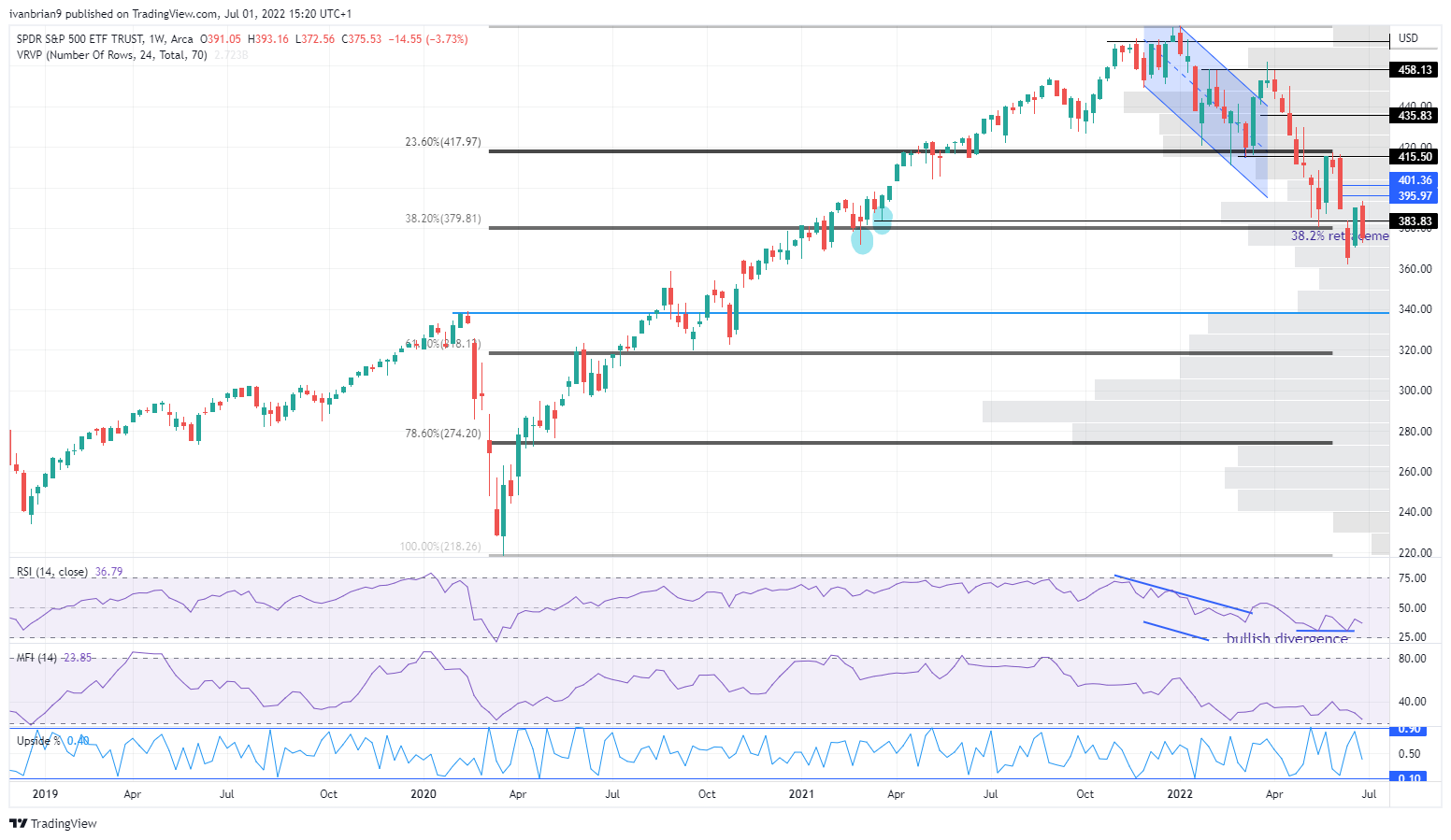 Many thought the squaring up ahead of H2 and some index rebalancing earlier in the week would have seen the gap filled from $395 to $401. A possible extension up to $415 would then have been in the cards. The problem is we are all now looking to sell the rips rather than buy the dips, so everyone stays on the sidelines waiting for the rally to accelerate before shorting the top. All this waiting means the rally never gets going in the first place. 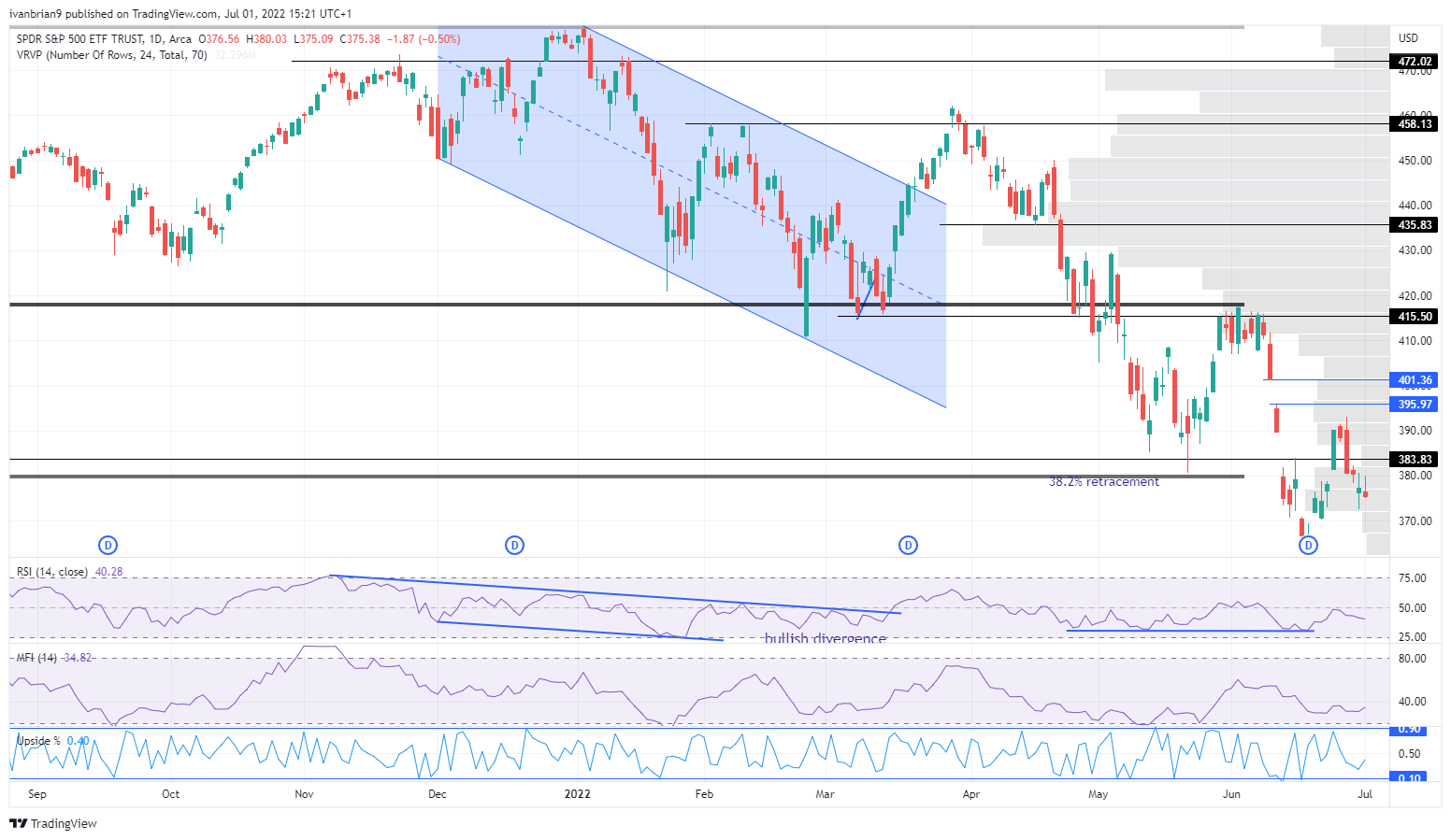 Average AAII bull-bear spread for June is at lowest level since Jan 2008.

Sentiment might be near washout levels, but positioning has hardly budged.

We would not be surprised to see weakness in the short term, not quite of washout levels but just enough to frustrate any longs and or those looking for a rally to sell into. This will draw in some frustrated sellers who will short the low only for equities to finally rally into mid-July. This is just a hunch based on the sentiment and positioning data. The continuous fall in yields should see equities catch a bid and the Nasdaq begin to outperform as it is more interest-rate sensitive.

Not much to get excited about. The week after is earnings season with the banks starting things off as usual. It is no surprise that this week ahead has little to offer. 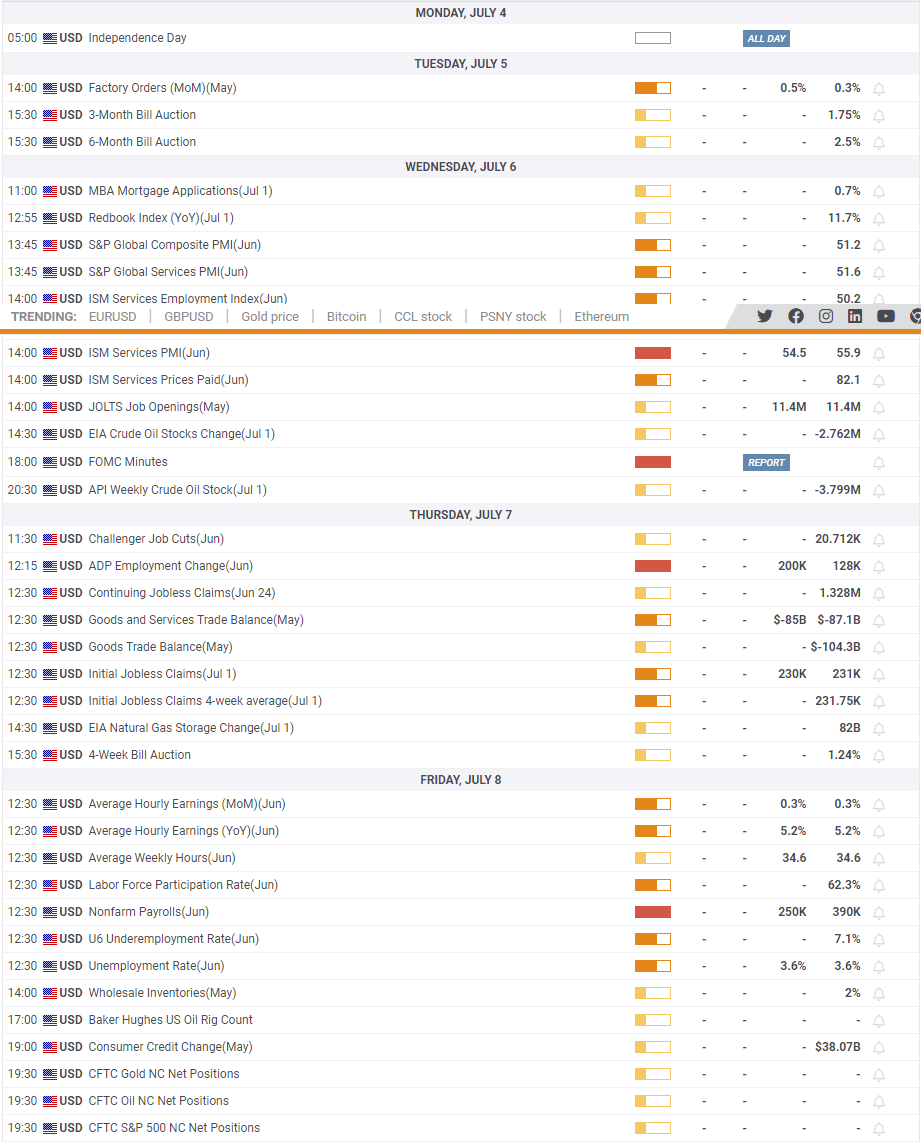