It will be a quiet week, without any central bank meetings and only a handful of data releases. Some remarks by the Fed chief could attract attention, but the overall focus will remain on Congress, where the new relief package is finally taking form. The question for markets is whether the narrative of US economic exceptionalism can continue to push both the dollar and equity markets higher, and whether the dollar is slowly losing its safe haven status, becoming more aligned with US fundamentals.

It has been a long time since the dollar and stock markets powered higher simultaneously, but here we are. There has been a striking shift in dollar dynamics ever since the Democrats took control of the US Senate, with the reserve currency now responding positively to promises of massive spending packages, as the brighter outlook for the economy eclipses deficit concerns.

The logic is that if all this spending turbocharges the US recovery, the Fed could start scaling back its QE program sooner than other central banks, and speculation around this has brought the dollar back to life. The other side of this coin is the mess in Europe. Not only is the economy struggling because of the never-ending lockdowns, but most of the Eurozone has also fallen way behind in the global vaccination race, and there isn’t much stimulus in the pipeline either. 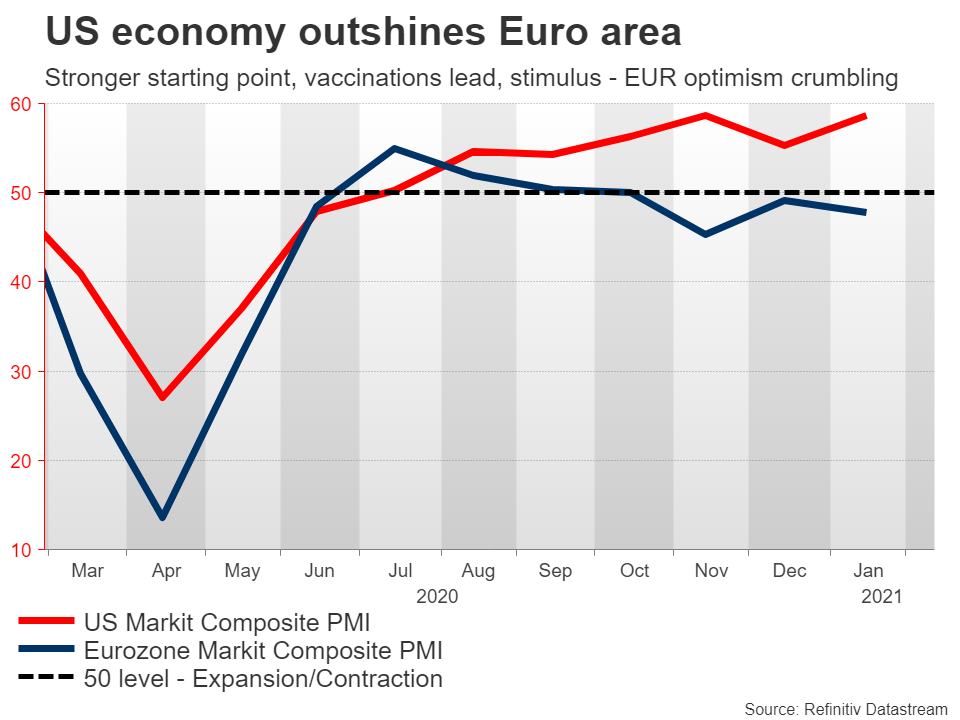 The difference in economic fortunes has become clearer lately, dragging euro/dollar back below $1.20. But at the same time, US equity markets have continued to hit new record highs, as the insanity with ‘meme stocks’ calmed down, allowing investors to focus on the rosy outlook of the post-vaccine economy again.

Looking ahead, we may be entering a phase where the dollar becomes more aligned with the strong fundamentals of the American economy, and perhaps loses some of its haven mojo. The negative correlation with stocks has faded lately, and as long as Europe remains in dire straits, this paradigm could persist. 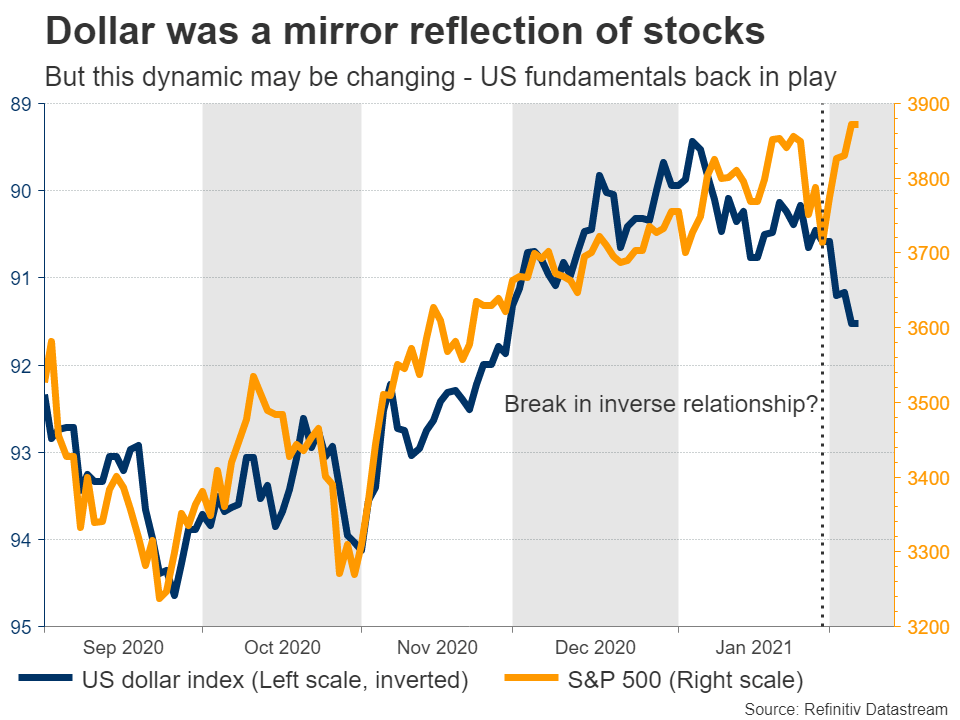 For now, a lot is riding on the stimulus votes in Congress. The Senate held a marathon session to vote on all the various amendments of the $1.9 trillion relief proposal, and if markets sense that the final price tag won’t be watered down after all, the party in equities could keep raging.

Staying in America, the two key events will both be on Wednesday, when the latest CPI inflation data is released, and Fed Chairman Powell speaks before the Economic Club of New York.

On the data front, forecasts suggest the annual CPI rate ticked up to 1.5% in January, from 1.4% previously, while the core rate is expected unchanged at 1.6%. If anything, the risks surrounding these forecasts seem tilted to the upside. The ISM business surveys showed a sharp increase in the prices paid by companies, while the Markit PMIs suggested firms also passed those costs onto consumers.

In particular, the ‘prices paid’ component of the ISM manufacturing survey skyrocketed to a decade high in January, and this usually leads actual inflation by a few months. If there is a positive surprise, it could intensify speculation around how quickly the Fed might begin discussing a QE withdrawal. 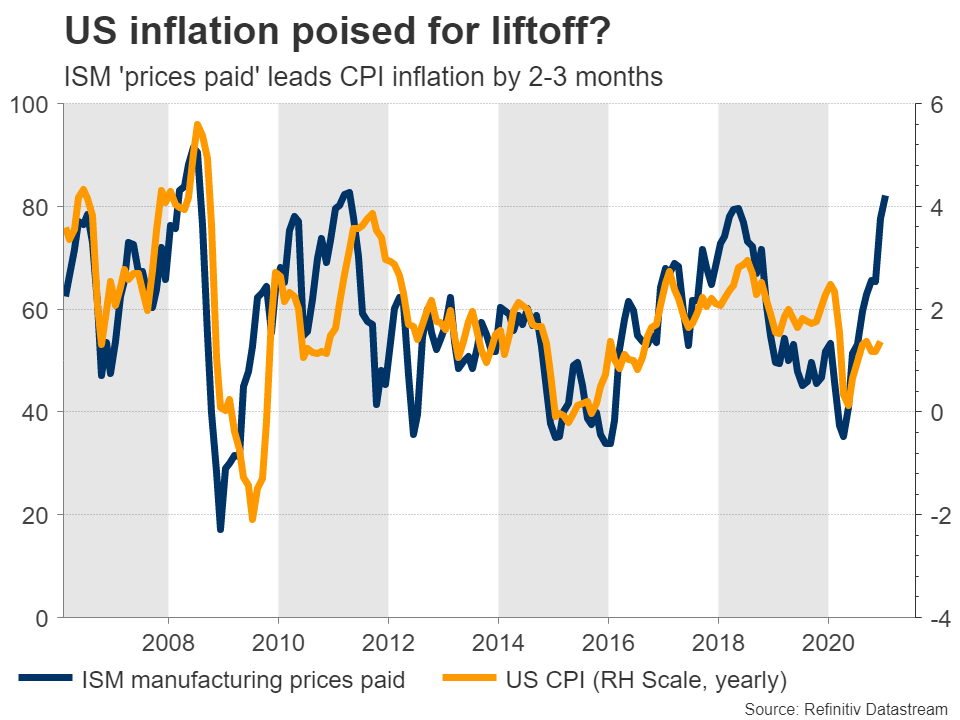 That said, Powell is likely to push back on this narrative. He has been painfully clear lately that it is too soon to be talking about tapering. Even if inflation spikes, he will likely argue that this will be a transitory episode, not worthy of a policy reaction.

Of course, there’s no real way of knowing that for sure, especially with all the spending that Congress is about to unleash. This could be the real theme of this year – whether the Fed will stick to its promise to overlook high inflation or whether this tune will change once inflation nears 3%, something more than possible given all the federal spending, soaring commodity and energy prices, and supply chain disruptions.

Pound off to the races as vaccinations move forward

The other shining star of the FX market lately has been the pound. The domestic economy is still in a deep hole, but Britain is leading the major nations in the vaccination race, sparking hopes that it could ‘return to normal’ faster than others. The Bank of England playing down negative rates helped as well.

GDP numbers for Q4 will be released on Friday but are unlikely to matter for markets. Everyone already knows this particular quarter was abysmal due to the lockdowns, and frankly, investors don’t care much for the past – they are focusing on the better days ahead. 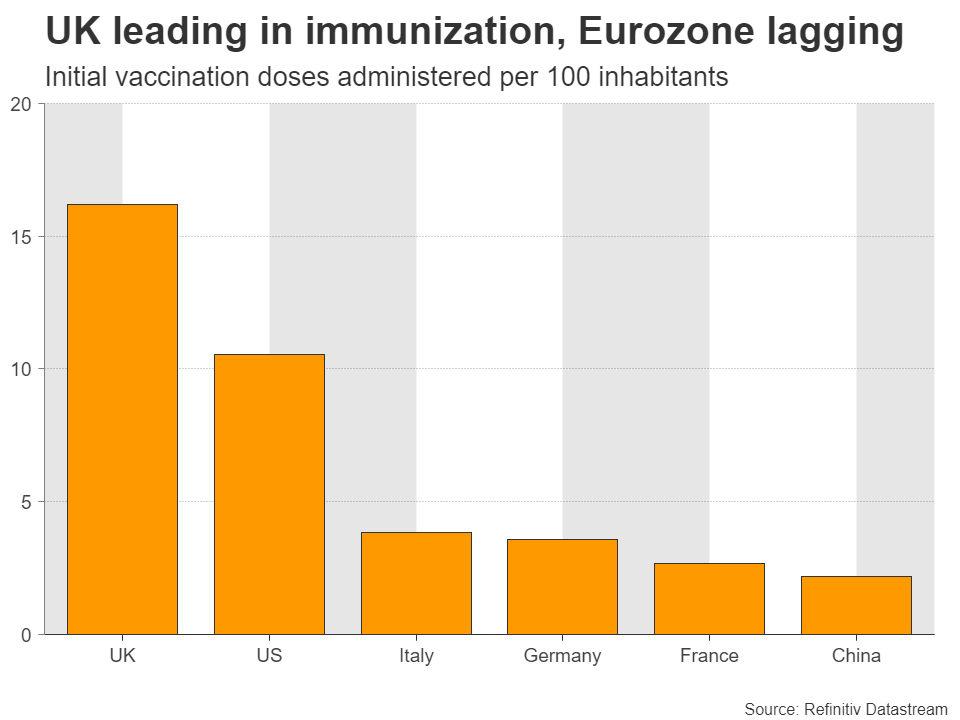 Instead, the main variable for sterling will be the pace of immunizations. If it continues as robustly as in recent weeks, the rally may still have legs, especially against the fragile euro. That said, euro/sterling has already fallen very dramatically, so a period of consolidation or even a small retracement would be natural before the next wave lower.

Finally, China’s inflation data for January are out on Wednesday. Markets typically focus on producer prices, which are considered a proxy for global factory demand. New Zealand will also see the release of the RBNZ’s inflation expectations survey on Tuesday. The central bank pays a lot of attention to this metric, and if inflation expectations keep rising, that would reinforce the narrative that the RBNZ is done with rate cuts.