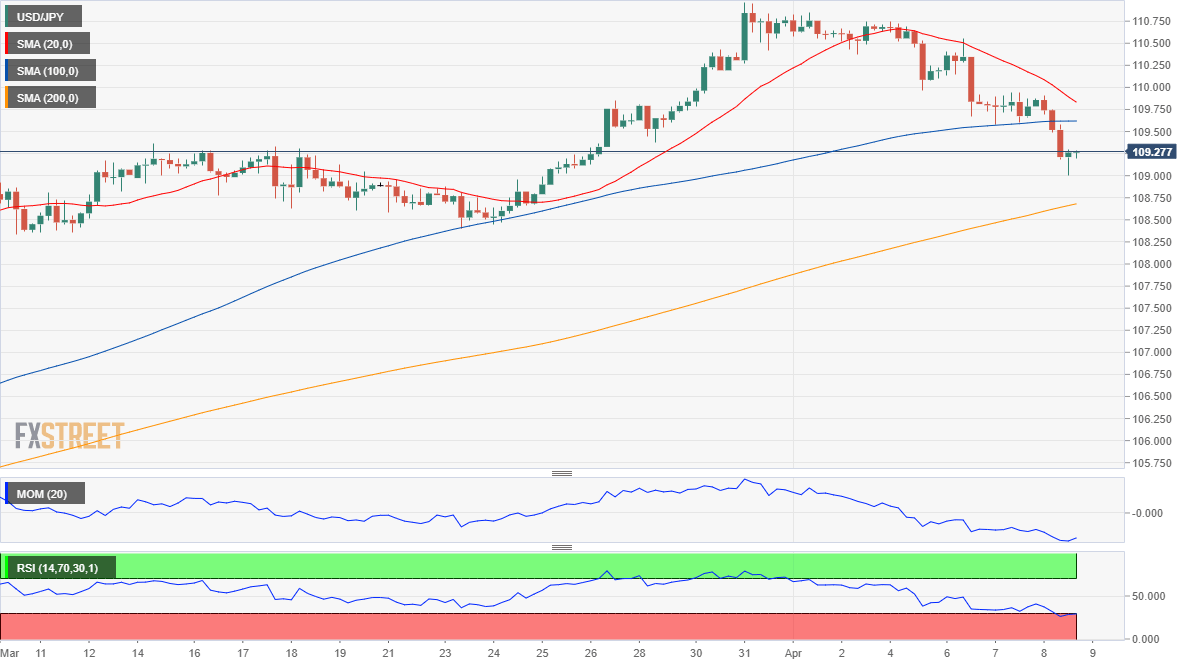 The USD/JPY pair extended its slump to 108.99, its lowest in over two weeks, bouncing from the level ahead of the close but ending the day in the red. Softer US government bond yields and the poor performance of global equities helped the Japanese currency against its American rival. European and American stocks managed to post modest intraday advances but spent the day within familiar levels, while the yield on the 10-year Treasury note settled at 1.63%.

Japan published its February Current Account overnight, which posted a surplus of ¥2916.9 billion, largely surpassing the ¥1996 billion expected. The Trade Balance for the same month improved to ¥524.2 billion from ¥-130.1 billion in the previous month. Also, March Consumer Confidence printed at 36.1, better than the previous 33.8.  The Eco Watchers Survey for the current situation came in at 49, while the Outlook resulted in 49.8. The country won’t publish relevant macroeconomic data this Friday.

The USD/JPY pair trades in the 109.20 price zone ahead of the Asian opening, with the risk still skewed to the downside as the pair reached a lower low for a sixth consecutive day. In the 4-hour chart, the pair remains below its 20 and 100 SMAs, with the shorter accelerating lower above the longer one. The Momentum indicator recovered from intraday lows but remains within negative levels, while the RSI holds around 33, reflecting bears’ strength.

An unexpected advance in weekly unemployment claims hurt the dollar, alongside the poor performance of US Treasury yields following words from Fed’s chief Jerome Powell.

GBP/USD pressured around 1.3750 amid vaccine concerns

GBP/USD trades around 1.3750, little changed, as the pound is incapable of taking advantage of the broad dollar’s weakness. Concerns about a delay to Britain´s vaccination campaign are weighing on sterling.

Spot gold (XAU/USD) prices hit their highest levels in over a month of just north of the 18 March $1755 high in recent trade and continue to hold in the upper-$1750s.

Ethereum Price Forecast: Buyers aim for $3,000 as more than $52 billion worth of ETH locked away

Ethereum price has been under consolidation for the past week after a run to its new all-time high of $2,151. The digital asset faces weak resistance ahead according to various on-chain metrics while bulls target $3,000.

It’s tempting to say that miners are showing strength compared to gold based on the GDX’s performance, but other mining proxies say otherwise.